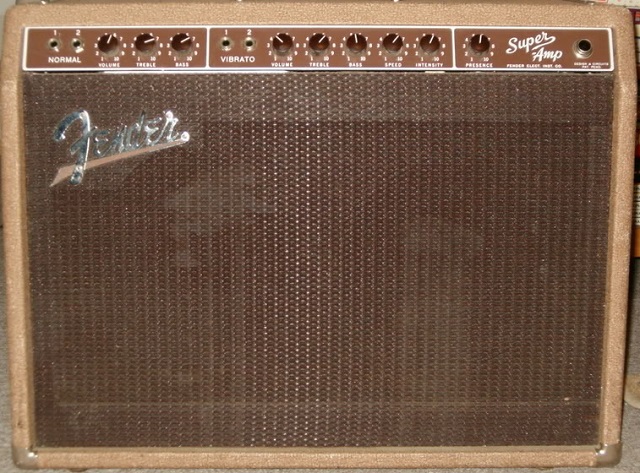 
It’s the period between the Tweed and Blackface models: ’59 - ’63. Brown Fenders sound cleaner than the Tweed amp, but still warmer and dirtier than the blackface models. Like the Tweed amps, brownface amps are very collectible. More information.​
According to Wikipedia, the Super originated as a renamed version of the Dual Professional, supposedly the world’s first twin-speaker guitar amp. Remember, this is the Super, not the Super Reverb which is a different amp.

And we've got a classic amp here, again. According to Vintage Guitar the sound of a Tweed Super "in the estimation of many a vintage-amp fan, is among the sweetest and most delectable of any amp ever made”. The Tweed-version of the Super (single channel, 30 watts) is the most sought-after version of the Fender Super and was Leo Fender’s personal favorite, according to Vintage Guitar. The ’57-’60s Fender Super occupies spot #12 on Vintage Guitar's list of the 25 most valuable guitar amps. The Fender Super is also very famous for its built-in vibrato, which in fact is a tremolo, sometimes called a "harmonic tremolo".

It has two channels: Normal and Vibrato. The Fractal Audio model is based on the Vibrato channel, with these controls: Volume, Treble, Bass, Presence and Vibrato (the vibrato is not modeled). There’s no Middle tone control, so keep this at “5” in the model for authenticity. No Master Volume either, so keep the Master control in the model dimed.


Note that the range of most Fender models is 1 to 10, while the model controls range from 0 to 10. For the OCD-crowd, here's a translation table, created by forum member Barhrecords.​
The Super provides two inputs per channel. Fractal Audio models of Fender amps are always based on the input with the highest input level. To get the equivalent of using the lower input, set Input Trim to 0.500.


A full collection of IRs from this amp can be purchased in Cab Pack 15, The American 2x12 Collection:http://shop.fractalaudio.com/Cab_Pack_15_The_American_2x12s_Collection_p/fas-801-0015.htm.​
With the stock cab, and a strat or telecaster, there's not a lot of tweaking required IMHO. Amp controls at default, dial back Bass, Input Drive at 4, and you have a great vintage Fender tone. Increase Input Drive to 6 for a little more bite.

A selection of vintage Fender Super videos on YouTube:

Can't be said enough, but thanks again for collecting all the info yek and making these great little write ups. The youtube example videos are a great touch too, very informative an helpful!
R

This series is great! Best first-thing-in-the-morning read ever.

Oh... and perhaps those with experience could offer advice on which drive pedals might work well with each amp?

Thanks Yek for putting all this info together, much appreciated.
A

These should be aggregated into a subforum (that only Yek or the admins can start new threads in). Great info in these.
-
Austin
S

And here's how to add harmonic tremolo, which will sound closer to the amp's "Vibrato" than the Tremolo/Panner block:

(That thread is seeking to emulate the Strymon Flint, which in turn is emulating the harmonic tremolo from early 60s brownface Fenders).

these are really great, yek...keep up the good work!

i also agree, these should all be grouped together in a subforum, so they don't get split up

Tried this last night. Man, I love this one!

simeon said:
these are really great, yek...keep up the good work!

i also agree, these should all be grouped together in a subforum, so they don't get split up
Click to expand...

I've made myself simple presets from scratch based on each of these threads so far. It's a really awesome learning experience on the amps themselves. I especially enjoy the constraints of the original controls, and keeping myself limited to period-correct effects (like non-tap slapback tape echo, or harmonic tremolo with the Super).

The timing is perfect as well since I only recently got my AX8 and was just starting to build out some "amp-based" presets.

I've read all three posts so far and agree that they are great!

But I wonder if rather than a sub-forum maybe a sub-section of the wiki might not be better?

This is great stuff. I'm reminded of a feature request I made a couple years ago: it'd be great to somehow mark controls on the AFX screen that were not present on the amp the model is based on. Too easy to miss your tip to leave the mid at noon, for example.

simeon said:
these are really great, yek...keep up the good work!

i also agree, these should all be grouped together in a subforum, so they don't get split up
Click to expand...

Amazing idea and well executed. This series needs to be tucked away for convenient searching and re-reading.

Does a marvelous job!

Yek's amp model write-up's can be found in the amp models section of the wiki: