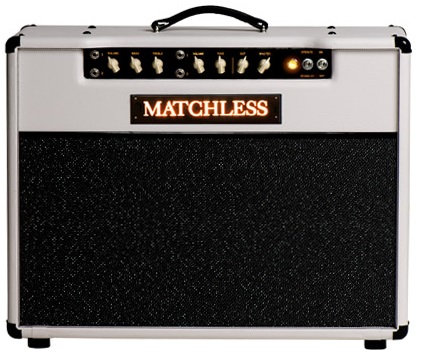 Matchless initiated the boutique amplifier craze in the '90s. One of its founders was Mark Sampson. The amplifiers that were made during the time that he worked at Matchless are considered the best (“Sampson-era”). Matchless amps are often associated with country music (Nashville) but they are also used by rock bands. More information about Matchless

Matchless takes the Class-A tone to a higher level. We already discussed the Chieftain. The C-30 is their most famous and even legendary amp. The DC-30 is a 2-channel, Class A, 30 watts combo version with EL84 tubes and two inputs. The HC-30 is the head -only version.


“In achieving Matchless founder and designer Mark Sampson’s goal of being “…an AC30 that wouldn’t break down,” the DC30 also became one of the best-loved and most-used amps of hard-working players in the studio and on the touring circuit. These EL84-based class-A beauties are entirely hand-wired in the lauded point-to-point style, and deliver classic British chime, shimmer, and crunch, but with a certain modern clarity and fidelity and a bulletproof robustness relied on by countless pros. Bolted into one of Matchless’ rare exotic-wood cabs, they look awful sweet, too.”
More info about the DC-30​
Matchless:


“This is what changed the amp world. The DC-30 was the company’s first design and still leads the lineup.

Thirty very conservatively rated watts from a quartet of EL-84’s, through two channels, each with unique voicing and tone control layouts, produce a world of tone choices. True “Class A” configuration gives rich, complex harmonics whether played clean, mildly overdriven, or with all out power tube saturation. This means you should sound great in any situation, in any music style.

The preamp sections are based on a layout of two 12AX7’s in Channel 1 and one EF86 in Channel 2. The two 12AX7’s in Channel 1 create a parallel-triode circuit with interactive bass and treble. The one EF86 in Channel 2 consists of a high-gain pentode coupled to a six-position tone switch. Outright benefits include quick dial-in of new tones and an easy return to the settings you prefer. Also “high treble” cut control, master volume, with a bypass feature that offers flexible control of the power amp section. The power amp is fed by a 12AX7 phase inverter, which drives four EL84 power tubes. The rectifier circuit gives you the flexibility of using one 5AR4 for a quick attack or you can use two 5V4’s for a smooth, round response. Other professional features include an effects loop, half power-mode switch (a conservative 30 watts switching to 15 watts), output impedance selector (4, 8, 16 ohms) and a speaker phase-reverse switch.

Sound on the 212 Combo is delivered through two dissimilar Celestion speakers: a G12H30 and a Greenback 25, each specially modified through a proprietary MATCHLESS formula. All of this is encased in an extremely sturdy hand-made 11-ply, 3/4” Baltic birch cabinet, wrapped in richly textured black vinyl. The finishing touch is our signature backlit nameplate and control panel, which lets you (and the audience) know when the power is on.”
​
Manual:


“MATCHLESS amplifiers are cathode biased and operate mostly in a Class “A” mode. This means that current flows continuously through the output tubes whether a signal is present or not. Most amplifier designs employ the more popular “AB” or “AB1” biasing technique, which although capable of producing more power for a given tube configuration and transformer size, produces crossover distortion and more odd order harmonics. This is why MATCHLESS amplifiers are described as having a smooth tone that won’t fatigue ears even at a high volume. The MATCHLESS design also does away with controlled or corrective negative feedback, allowing the amplifier to run “open loop” or wide band. This is why your amplifiers sound full and rich at low or high volume levels.”​
Cliff:


"The DC-30 is basically an AC-30 copy. The voltages are a bit different but the topology is nearly identical. However, IMO, it does sound better. Not sure why. Perhaps the better quality components. AC-30's have kind of crappy OTs."​
Channel 1 has a 12AX7 preamp tube, while channel 2 has a EF86. The two channels are very different in sound.


"Channel 1 has three controls, VOLUME, BASS, and TREBLE. This is the “triode” channel. This channel offers a two stage active tone circuit employing a second pair of triode amplifiers. This circuitry is popularly referred to as a “tone-boost” or “treble-boost” circuit. The Bass and Treble controls are highly interactive and capable of a wide variety of textures. Channel 1 may be preferred for that early British sound that we have become so endeared to. If you play a RICKENBACKER or GRETSCH guitar through this channel, you will recognize this familiar sound instantly.​
Channel 2 utilizes a “pentode” vacuum tube as the first preamplifier stage and is followed with a six position rotary switch to control the tone envelope. This preamplifier tube is capable of more gain than channel one and is capable of being overdriven harder. The tone control for this channel is passive. This may become the channel of choice for a “heavier” sound, especially when overdriven and used in conjunction with the MASTER volume control option. The multi-position rotary tone switch varies the dimension or width of the tone envelope. The minimum position (counter clockwise) will procedure a thinner sound that will become thicker and thicker with each clockwise click of the switch. This switch has a total of six tonal textures."​
Our model is based on channel 1 with Master bypassed.


“The CUT control varies the bandwidth, or high frequency response of the power amplifier. This is characterized by fewer heights or less top end. The CUT control is used to soften or take the edge off a harsh instrument or tone setting. The effect is subtle before the halfway point on the control and increases the amount of cut from midpoint to full. The CUT control is most effective when the Master volume is bypassed or set for maximum gain.”​
Sample amp settings

The Matchbox model in our Fractal Audio devices is a favorite of many players, for clean tones with chime as well as crunchy work.


I keep Bass and Treble pretty much at default, turn up Cut to about 3.00 (depends on guitar), and then vary Input Drive between 2 and 8, depending on my needs. This model is very input sensitive, you can really dig in, and get that juicy compressed tone.​
Matchless amplifiers commonly use a combo of custom 30 watts G12-H and 25 watts G12-M speakers. We’ve got them in our devices: look for the Boutique stock cabs. I use cab #30.

Imagine if Cliff only modelled the AC30 Normal Side and didn't model the Top Boost side ?

I know I'm a broken record, but to this day, I am completely flummoxed as to why Fractal only modelled the 12AX7 [Ch1] side of this amp and not the EF86 [Ch2] side ?

Not exactly the same but try changing the preamp tube type to EF86.

Imagine if Cliff only modelled the AC30 Normal Side and didn't model the Top Boost side ?

I know I'm a broken record, but to this day, I am completely flummoxed as to why Fractal only modelled the 12AX7 [Ch1] side of this amp and not the EF86 [Ch2] side ?

Very interesting description / story on this particular amp....the note re: Channel 2 with it's 6 position rotary dial up "texture" is quite intriguing.

The basic amp controls in axe edit are blank?

He G3'd it, so he had to have had it fairly recently. i'd love to see that channel as well.

the thing i don't get about a lot of those demos is they use the master volume so much....the amp just sounds so much better when it's cooking.

...as is true for all class A amps. The tubes have to be driven hard to deliver what they are built for.

The downside is that you need a new set of tubes every ten or so gigs due to excessive tube wear.

Moderator
Such a rotary tone knob is not unique though.

yek said:
Such a rotary tone knob is not unique though.

yek said:
Such a rotary tone knob is not unique though.

it's not the rotary knob, it's the EF86 channel as a whole. just changing to EF86 in the Axe is NOT the same thing. it's different than the 12ax7, but doesn't truly mimic how that channel reacts/behaves.

For some reason I'm having a harder time with this amp than I did way back when, around Firmware 17-18. Back then it seemed to have some midrange girth that is lacking now. Need to look into that, change IRs, etc.

Years ago I got smacked upside the head with this amp: I was at a James Taylor concert. Mike Landau breaks into a solo, and I was sitting there thinking "what the hell was that?!" Then I started noticing the cleans more, and the overdriven tones. Fantastic tones. I had to get closer to the stage to see what it was. I was a die-hard Mesa guy at the time.

I got the distinct impression that this was an amp that liked very much to be very loud.
P

I just want to add myself to the number of people here asking politely for a model of channel 2.
G

Although I never used a DC30 in real life it is a staple for me in the AXE. I didn't even know there was another channel. I use it for a lot for rhythm and somewhat broken up leads. I've often wished for a more over driven solo sound with the same qualities as the rhythm channel. Who knew? Maybe Cliff will get curious and revisit the lead channel. Hope so.

parlopower said:
I just want to add myself to the number of people here asking politely for a model of channel 2.
Click to expand...

I'll be joining that list as well, love this amp.

gibvictory said:
I've often wished for a more over driven solo sound with the same qualities as the rhythm channel. Who knew? Maybe Cliff will get curious and revisit the lead channel. Hope so.
Click to expand...

You could try Input Trim/Boost or the Sat switch... play around with those and it might get what you're looking for. I find a number of the cleaner amps sound really good w/ Input Trim set around 2-3. (Fenders, USA Clean, Class A types, Dr Z...) In fact, I think on my DC30 patch I have the rhythm on X at regular settings, and then basically the same settings on Y but Input Trim in the 2-3 range for more crunch and a sweet solo tone that compliments the normal sound.