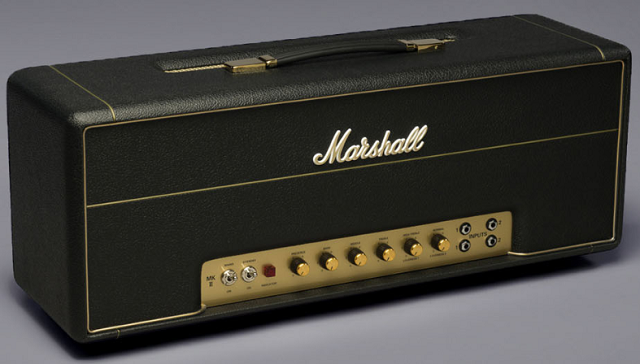 The world’s greatest rock amp is a Marshall “Plexi”. These came to the market in the mid ‘60s, when Marshall and Fender started to make loud amps. These amps are referred to as “Plexi” because of the gold Plexiglass front panel, later: gold aluminum. Plexis with 4x12 cabinets gave rise to the "Marshall stack". The Plexi was built for almost 20 years, and was then replaced by the JCM 800. Even today's amp builders still design amps based on the Plexi, such as the Bogner Helios, Friedman Smallbox etc. Its looks are still being copied for all kinds of guitar amps.

Why has the Plexi become such a popular amp? According to Legendary Tones:


“Many things. First and most important perhaps is the sense of dynamics and rich harmonics. No large-production amp created before or since the early Marshall plexi series has been able to capture the feel of the player through varying degrees of dynamics and coloration from the (mostly) EL34-based tube circuits of these Marshalls. Call it a lucky accident with the folks at Marshall, but they were able to create amplifiers that really responded well to the guitars that played through them. A wide palette of distortion color that is rich and full and just powerful and timeless in tone is what these amps deliver. It takes some time to really get used to playing a basic amp such as a Marshall plexi. No multi channels or reverb or effects and no master volume controls. Turn up the amp and play – play hard and the amp rewards you with fullness of tone and smooth distortion. Back off your playing and the amp will respond, and move into lighter shades of overdrive. Roll down your guitar volume a touch and you’ve got a warmed up clean sound. There just isn’t anything like the ability to feel a set of power and preamp tubes overdriving together musically.”​
The ‘60s Marshall Super Lead was one of the original 100w Plexis, a very desirable amp (#9 on Vintage Guitar's list of valuable amps). It's raw, unrefined, honest and touch sensitive. Hit a chord and feel that explosion of sound in your face and body.

The Plexi came in various incarnations. Many (but not all) have a JMP logo. We already discussed the reissues: 1959SLP (Super Lead Plexi) and 1987X. But we’ve also got models of the originals:

PLEXI 50W HI 2: High (Treble) channel of another 50w from the ‘70s. Its second triode stage has a 0.68uF cathode bypass capacitor, added in the early 70’s, for a slightly brighter tone.

In what aspect is a 50w different from 100w? Not a lot in volume (50w is also very loud, the difference is just a couple of dB) and not a lot in gain. The 50w Plexi is a little more aggressive and compressed, while a 100w Plexi sounds more open and bigger (more headroom) with more “kerrang”.

The rhythm (Normal) channel has a flat response. It's dark and has loads of bass. Cliff:


"Don't be afraid to turn the bass all the way down or the treble all the way up. Just like with the actual amp. For example, on the normal channel of a Plexi most people turn the bass way down. Otherwise it's too flubby."​
The lead (Treble) channel has a boosted bright tone, even bordering on painful. A popular “amp mod” of the real Plexi was to clip the bright cap. In the models that’s easy: you turn off Bright (not possible on the Normal models). Or you can adjust the Bright Cap value on the Adv page. Note: turning off Bright will result in noticeable loss of amp gain. Cliff:


“One of the first mods people make to real 'Plexi' Marshalls is to "clip the bright cap". The bright cap varied over the years, supposedly depending on what was lying around in the shop. The model defaults to the bright cap in the circuit. If you turn off Bright you're effectively clipping the bright cap. The bright cap in Marshalls can be very bright and harsh. However, if you crank the Master you might find the extra brightness helps compensate for the power amp getting darker.”​
Controls: Volume, Bass, Middle, Treble and Presence controls. Cliff:


"My settings for a "typical" Plexi tone are Bass: 2, Mid: 8, Treble 7.5. Adjust Presence to taste."​
Eddie Van Halen had all the controls dimed. And to emulate his VARIAC: set the parameter “AC Voltage (Variac)” on the model’s Advanced page to 75 or so. Legendary Tones:


“A VARIAC (“Variable A/C”) is an unit that changes the voltage coming out of the wall to a lower amount. Like a light dimmer. When a VARIAC is used in conjunction with a SLP, it can act loosely as a Master Volume. You can crank the volume controls up to 10 on the Marshall and then bring down the overall sound using a VARIAC so it can be controlled. There is debate about whether damage can be caused when reducing the amplifier’s voltage. Undoubtedly, the tone will change somewhat as the bias of the power tubes will change corresponding with the reduction of voltage.”​
Some people complain that a Plexi can sound fizzy. Cliff:


"It's the way a Plexi is supposed to sound. That's due to the cathode follower. That raspiness helps it cut through in a mix. I own three of them and they are that fizzy."​
Some players of a real Plexi use patch cables to “jumper” them. This enables them to have the benefits of both channels at once. This is modeled in the “Jumpered” models. These have two Drive controls. Set them at the same position, or keep Normal Drive lower than Treble Drive.

Like the originals, the models don’t have a Master Volume, so keep the Master control in the model dimed. Without a Master Volume control, Plexi amps rely on power amp distortion. To achieve a nice overdriven rock tone, you need to turn up Input Drive a lot. This makes it a very loud amp in real life.


If you like to experiment, turn up Supply Sag in the model for more compression. Note that high Sag settings may cause "ghosts notes". Exactly like on the real amp at high volume: check the interview with J.D. Simo below. If you don't want ghosts notes, switch Supply Type to "DC".

Another tweak is to turn on Boost on the Advanced page, to slam the model's input stage for more gain.​
You can’t discuss Marshall amps and leave out speakers, in particular: greenbacks. Early Marshall amps were used with 4x12” cabinets with Celestion G12M speakers. Greenbacks have a sweet midrange and good bass reproduction. The rear of those speakers was green, and the nickname “greenbacks” was born. They are the reason that 4x12 cabinets were designed: the G12M was only 20 of 25 watts, so you needed four of them to prevent blowing them up.

Another popular speaker in those days (and it still is): the G12H. A 30w Celestion speaker that compresses less than a greenback and has a flatter response. It’s the “Jimi Hendrix” speaker.


You check this page for the stock "greenbacks" cabs.​

One of my absolute favorits in the Axe! I don't know the original, but since it can only be as good or better than the simulation this amp is definitely a killer!
L

Some of my favourite amps, and I have '78 50 watt modified to '68 spec schematic and output transformer. For some reason I haven't done anything with the plexi models in my Axe-FX yet. I think it's because I have become wired up over the years to think of these amps as only for use where I can play outrageously loud. Think I'm pretty well there with the 2203 100 watt Master Volume, and have a good and I think pretty convincing array of good sounding Fender models, so I think some Plexis need to be next on the list. Cliff's right about them being fizzy in real life, but it's at such ridiculously high SPL that it kind of smooths itself out when you're in the room.

Great work yek - love the knowledge and experiences. Such a great series and loads of information.
Last edited: May 7, 2016

For me, the amazing thing about the FAS Plexi model is how it behaves like a great Plexi having a great day. I have never been able to really dial in a "roll your eyes back in your sockets because it's so good" tone on a vintage (genuine) Marshall. It's definitely operator error, because obviously plenty of great players have gotten heavenly sounds from those amps. But in the AxeFX, I've been able get really gorgeous Plexi tones with little fuss. I'm curious at this point, and next time I get a chance to play an older Marshall, I'm doing to see if my experiences translate back to the physical amp. As I'd said before, I am quite certain the Marshall models in the AxeFX are spot on, because everything in the AxeFX is that good. My AxeFX has changed the way I play, and probably has taught me how to properly interact with a Marshall.

These amps are part of my musical DNA
R

Smittefar said:
These amps are part of my musical DNA
Click to expand...

Man, like to get my hands on the one owned by Kossoff! That one sounds amazing. Interesting how they all sound different but have that instantly recognizable Marshall sound

One of the first things I did was match the Axefx to my '74 Marshall Superbass. Within 15 min, I had it nailed, in tone and feel. The Axefx Plexi is excellent, they really got it. I've since sold the Marshall! It was scary loud, I had to attenuate it a ton at gigs and who wants to do that?

Moderator
I'm surprised this didn't get more comments. It's my 'go to' on so many songs that it's silly. I'm with Smittefar in that this is in my DNA...it just sounds RIGHT to me. The 50W Bright I have dialed in where I could use it all night and never move on (vol knob, the FX I have on the preset...love.) For some reason the 100W versions don't have the same mojo with me (and boy have I tried...) Even now as I say this, I'm going to give it another go...

And oddly, that tone speaks to me regardless of FW upgrades. Mild tweaks and welcome to paradise...

Hey @yek. Another great write up. I hope 'real work' isn't keeping you too busy.

I wonder who decided to give the model numbers 4 digits and make them look like a year.......?

I gotta say though, I'm really surprised just how very different it is from the other Plexis. I would have expected it to be a slight shade of difference from the PLEXI 100W JUMP model, as the 1970 is described as basically just being a darker variant. But its way different than that... my ears say waaayyy more gain. Comparable maybe to the JCM 800 model, but with more of that in-your-face Plexi vibe.