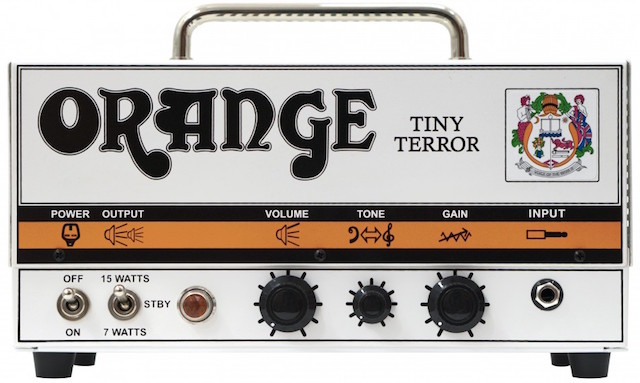 The English company Orange has been around since 1968. More company background. You can’t miss the bright orange amps on stage, and they are found on many stages.

The Tiny Terror is a simple and portable amp. Single channel, EL84, and switchable between 7 and 15 watts. At 15 watts it is still loud enough to keep up with a drummer and fill a room, when combined with an appropriate cabinet. The Tiny Terror was modeled in 15 watts mode.


“Often imitated, but never equalled, the iconic Tiny Terror quite literally turned the guitar world upside down upon its launch. Heralded by Guitarist Magazine as ‘the most important guitar product in the last 30 years‘, Tiny Terror ownership now stretches to well over 30.000 players worldwide. This is the original ‘lunchbox’ amp head, and continues to set the standard by which all other low wattage valve amplifiers must be judged.

Combining ultra-portability with an outstanding array of valve tones, Tiny Terror head delivers an exceptional range of British valve tones made possible by a single channel with just three controls. A unique preamp section and gain structure goes from clean/bluesy crunch to Punk and Classic Rock, all controllable by your guitar’s volume knob.

The intuitive tone circuit acts as a roll off for the upper frequencies whilst always retaining the character of the instrument, even when driving the amp to its absolute limits.

Whilst the philosophy behind the Terror series began with the gigging musician on the move, their huge sonic range, supreme usability and switchable output options has made them the ‘go-to’ amps for studio engineers and producers alike.”​
Typical for Orange amps are the symbols describing the panel controls, instead of names. The controls are very simple: Gain, Volume, and a single Tone control.

It really is an amp for dirty tones only, useless for clean tones. Cliff:


"It's inaudible when clean.”​
"The tone control is actually a high cut control in the power amp and is therefore replicated by the Hi Cut parameter. The Hi Cut set fully CCW is equivalent to the amp’s tone knob fully CW. The model uses a neutral tone stack. Set T/M/B to noon for authentic sounds or adjust to taste."​
Of the Citrus amps, I like this one the best. Gain around 7, Hi-Cut at 2.50, and control the gain with the guitar’s volume knob. That's all.

The Tiny Terror combo comes with the G12H speaker. But it works well with the larger Orange cabs with V30 speakers as well. There are several Orange (“Citrus”) stock cabs with V30s of which I like #126 best.

Never felt any love for any of the Orange models.
Tried the Citrus Terrier and really liked it.
Then tried the A30 and played it for over an hour.
Matched it with the 4x12 Citrus 421 Cone from cab pack #5
Never would have done this without this thread.
T

I was glad to see it finally pop up for the AxeFX. I had asked Cliff about adding one at the last AxeFX West, and he wasn't familiar with it. It's one of the few amps that I keep around, just because it sounds so good (and looks so cool -- always loved the Orange look...)

Hey guys, I used the info in this thread to build an app that replicates the Tiny Terror amp panel to control your Axe-FX: 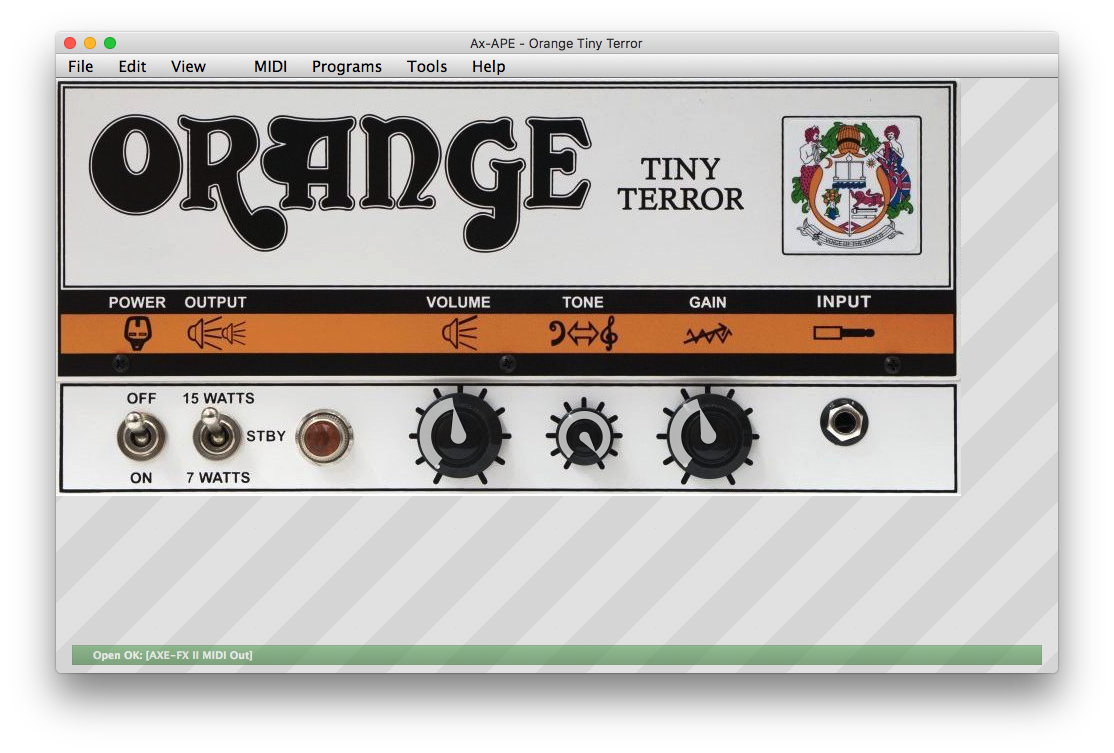 sumitagarwal said:
Hey guys, I used the info in this thread to build an app that replicates the Tiny Terror amp panel to control your Axe-FX:

Great idea! I wonder if this could be expanded to other models - it'd solve the demand for a "simple", "life-like" Axe interface!

This is one of the features I've wanted for AxeEdit or the AxeFx in general, a more graphic user interface a la what UAD has done with their plugins. I totally agree that the actual sound is the most important thing and I wouldn't want FAS to neglect that end to work on interface improvements, but it would be really nice if we had these model specific interfaces, it just adds to the vibe.

I thought yesterday to try some new amp out I usually never use. After a few FW upgrades it's worth again of trying some of them again. And I stuck with this one. It's not perfect but has some nice interesting texture when driven harder but not to hard. I found myself too that the drive at 7 sounds the best, coincidentally the same value like yek has mentioned above. I usually never go that high with drives but with this amp you have to. Have to check that Hi-Cut setting next time.