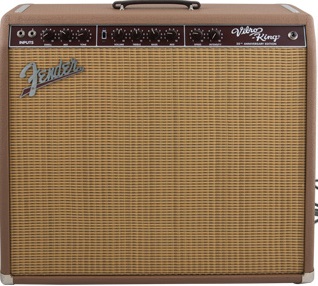 VIBRA-KING: based on custom Fender Vibro-King


Fender:
“Fender introduced the Vibro-King in 1993 to great acclaim, marking a return to a great hand-wired amp tradition while including a previously unavailable selection of sought-after features. In the two decades since, guitarists and amp aficionados everywhere have prized the enduringly classic Vibro-King as one of the most touch-sensitive amps ever, with sparkling-clean shimmer at lower volumes and powerfully thick overdrive when cranked up.”​
The Vibro-King is called the “King of Fender amps” by some. It’s a “modern” take on classic Fender tones. Vibro-King players include gary Clark Jr., Erc Clapton, Pete Townsend and Robert Cray. Fender made an expensive 20th Anniversary edition of the Vibro-King in 2013.


Fenderguru:
“Players seem to either love or hate the Vibro-King. If you’re not into reverb or tremolo you can steer away from this amp. 56% of the controls on the faceplate is about reverb and tremolo. The reverb has the same controls as a Fender standalone reverb unit offering a wide selection of reverb tones. Personally we like to reduce the tone and mix and go for a longer dwell. The tremolo can go really deep and slow, more than you might be used to with the blackface and silverface Fenders.”​
The modeled one is a custom version.


Cliff:
"The model is based on the custom version which has higher plate voltages which causes more overdrive on the power tubes."​
The amp has two 6L6 tubes for 60 watts power, a solid-state rectifier and built-in reverb and vibrato. It’s said to be an incredible heavy amp.

As usual this amp has two inputs. Fractal Audio models are always based on the input with the highest input level. To get the equivalent of using the lower input, set Input Trim to 0.500.

The controls are: Volume, Treble, Bass, Middle and a Fat switch. The amp also has vibrato and reverb controls.


Note that the range of most Fender models is 1 to 10, while the model controls range from 0 to 10. For the OCD-crowd, here's a translation table, created by forum member Barhrecords.​
It's a bright amp. There's no Bright switch to turn off, so turn down treble to tame the highs.​
The Fat switch switches the amp from clean into a cranked mode for soloing. We’ve have models of this amp with the Fat switch engaged and one with the Fat switch disengaged. As mentioned in this Premier Guitar article, some players only play with Fat engaged.

The Vibro-King comes with three 10” speakers. We have got these as a stock cab: 3x10 Vibrato Mix.


Fenderguru:
“This amp came originally in 1993 with the vintage style blue Eminence Alnicos, and after that Jensen P10r followed by different sorts of speakers from Celestion. Changing the speakers is an easy move for Fender to attract new and old customers again by altering the tone a little bit and calling the new model for “Anniversary model” etc. We find that the original blue frame Eminence give you more of a brownface tone while modern and louder speakers, (like the Weber 10a125/f125) points you into a more scooped blackface direction. We have found some of the best modern Jimmie Vaughan and Robert Cray tones with the blue frame Eminence Alnicos in this amp (maybe also with the Jensen P10r). The tone is very direct, snappy, responsive and you will hear all the trebly details from your fingers and strings. This tone is not for beginners but for those with a serious attitude for tone. If you are into more rock’n roll, or a fat, chunky clean sound, you should go for other speakers with more low end.​

Looks like someone had a day off? Does this qualify as a hat trick (3 in one day)?

Thank so much, Yek! This amp series has been very educational and enjoyable.

I owned one of these for a few years, beautiful sounding amp. The cleans on this amp were stunning. One thing I think maybe was modeled incorrectly is on the real amp if you put the tone controls all to 0 you wouldn't get any volume, the tone controls played an active part in the volume & gain of the amp.
Last edited: Jun 2, 2016

Perdikament said:
I owned one of these for a few years, beautiful sounding amp. The cleans on this amp were stunning. One thing I think maybe was modeled incorrectly is on the real amp if you put the tone controls all to 0 you wouldn't get any volume, the tone controls played an active part in the volume & gain of the amp.
Click to expand...

Cliff is known to leave out strange behavior of the original amp in the model.

I had a Prosonic that also would go quiet with all tone controls at 0.

Outstanding amp - one of few Fenders I've "bonded" with.

Here's some more Vibro King information, one of the more unique Fender amps.

• 3×10″ speakers are able to deliver both sparkle and punch. And you’ll have tons of it from this 60w amp. But you won’t get 60w out of this amp unless you hook it up with an 8 ohm extension cabinet. You see, 3×10″ with 8 ohm speakers gives a total impedance of 2.67 ohms. Adding another 8 ohm speaker in parallel reduces the speaker impedance to 2 ohms. One more speaker is 1.6 ohms. You will get the most power from this amp with a 2 ohm load where the power tubes see the correct/ideal speaker impedance, for example by using a 1×12″ @ 8 ohm extension cabinet. A 2×12″ is also nice and will give you more spread even if not as loud in decibels.
Last edited: Jun 3, 2016

The VK tone circuit is identical in topology to a BF/SF. A few of the components are of different values (the caps), but the circuit is the same. The reason most SF/BF amps don't go to zero is, most don't have mid controls. The ones that do, drop output when all zeroed.

The VK is more or less a Fender outboard reverb unit tacked onto the front of a "Vibrato" channel from a BF/SF amp. The big tone difference is, no negative feedback.

AdmiralB said:
The VK tone circuit is identical in topology to a BF/SF. A few of the components are of different values (the caps), but the circuit is the same. The reason most SF/BF amps don't go to zero is, most don't have mid controls. The ones that do, drop output when all zeroed.

The VK is more or less a Fender outboard reverb unit tacked onto the front of a "Vibrato" channel from a BF/SF amp. The big tone difference is, no negative feedback.
Click to expand...

Do the ones that do, (have all three tone controls) have zero volume when all the way down? On the VK if the tone controls are all the way down, there is no sound no matter how high you turn up the volume. One of the "tricks" with the VK is to crank the Vol all the way, put the tones at 0 and then just crack open one of them a tiny bit.. This way the amp distorts at lower, much much lower volume.

I did not know that! That came from fenderguru.com. The only old Fender amp I owned was a Silverface Bassman Head. It's been awhile since I sold the VK but I remember on the VK forums that the tone controls were regarded as something as an oddity, cause it was mentioned a fair amount.

What's odd is the fact that the VK rearranges the gain stages and volume/tone a little bit.

The VK's input - actually the 'return' from the loop (IOW, the amp input, rather than the reverb unit input) has a gain stage, followed by volume, followed by a gain stage, followed by the tone stack. So what you're talking about - diming the volume - overloads the second gain stage, but the tone thing lets you limit the output to the power amp. Can't do that in a classic Fender circuit, since there's nothing to overdrive 'this side' of the tone stack.
You must log in or register to reply here.
Share:
Facebook Twitter Reddit Pinterest Email Link
Top Bottom