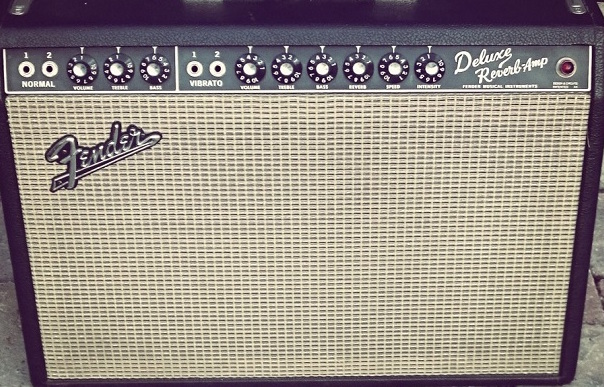 The Fender Deluxe Reverb, aka DR, isn’t the Deluxe with reverb added. Well, it is, but it does sound different, it's more scooped.

The Deluxe Reverb was introduced in ’63. The modeled amp is a ’65 blackface edition. It delivers a great, chimey tone and breaks up nicely when you push its volume. This amp has the AB763 circuit, delivering 22 watts through 6V6 tubes. More info.


"The Deluxe Reverb 1x12″ has for decades been one of the most popular amps among all Fender amps, and its popularity is still growing as the demand for low wattage tube amps increases. The combination of size, weight and performance makes the Deluxe Reverb a true road warrior on gigs and practice. The DR is a small/medium-sized amp with an ability to deliver both sparkling clean tones and low wattage breakup at 22W with 6V6 tubes and relatively small transformers (power and output). It has found its way in to more recording studios, clubs and bars than any other Fender amp. It has met many players’ expectations. It is just powerful enough to cut through in practice in a band with a drummer and, unlike some bigger amps, it will reach its sweet spot at a reasonable volume. It has the typical blackface 60′s sparkle with a scooped clean sound just like the bigger Fender brothers, just with more smooth breakup, sag and compression."​
ToneQuest:


"An equally fine choice for a versatile small club amp is the Vibrolux Reverb’s little brother, the Blackface Deluxe Reverb (1964 through 1967). It is rated at just 24 watts or so (with two 6V6 power tubes), but the overall circuitry in the amp is virtually the same as the Vibrolux Reverb. It has two channels, but I only use the second channel, again, due to the extra stage of gain. It drives a single 12" speaker. Most of the Deluxe Reverbs that Fender built have a very inefficient Oxford 12" in them. The first thing you should do to make this amp really worthy is to install a much larger ceramic magnet speaker. A better 12" is essential to having a Deluxe sound as good as it possibly can (and that is very good indeed.) The Deluxe Reverb will not have as much bottom as a Vibrolux Reverb, due to its smaller power tubes, but anyone who’s heard a Deluxe Reverb set at about "6" for leads knows how sweet the 6V6 power tubes sound. Again, you need to run this amp at "6" or above in terms of volume to really bring out the classic overdriven Fender tone. I find that setting my guitar’s volume knob on "10" for leads works wonderfully, then when I back it off to say "7" or so for rhythm, the amp naturally cleans up. That’s a neat trick to use. If you are hesitant to change your original speaker, consider acquiring a second speaker cabinet for your new and improved speaker. But remember, amps are tone machines, not museum pieces, so if you are torn between swapping out the speaker, keep in mind that you can always store it away and reinstall it if you decide to sell the amp later. I have an extension cabinet with a 15" Electrovoice SRO speaker in it, and I sometimes run my own Deluxe Reverb through that setup. It dramatically improves the tone—huge fat bottom, low mids, and much more overall volume."​
Fender still manufactures Deluxe Reverb reissues:


"We got our reference Deluxe Reverb out of storage today, hooked it up and measured and compared. Gain measures spot-on and A/B testing sounds identical. With a Suhr Modern guitar with stock pickups both the amp and the model were starting to break up around 3 (which equals 2.2 on the Axe-Fx since the knobs start at zero not one). A Deluxe Reverb breaks up easily since it has 6V6 power tubes. The preamp is virtually identical to a Twin Reverb but 6V6s break up earlier than 6L6s. For a given voltage into the power amp a 6V6 has about 70% of the headroom compared to a 6L6."​
"The values for the Deluxe Reverb model are based on measurements of an actual 65 Deluxe Reverb, not some hypothetical values on some spec sheet."​
The Deluxe Reverb has Normal and Vibrato channels, which both have been modeled because of their different characteristics. Most people will use the Vibrato channel and model, but the Normal channel is pretty cool too, especially for single note runs and jazzy tunes, IMHO.

Each of the channels has two inputs. Fractal Audio models are always based on the input with the highest input level. To get the equivalent of using the lower input, set Input Trim to 0.500.


Note that the range of most Fender models is 1 to 10, while the model controls range from 0 to 10. For the OCD-crowd, here's a translation table, created by forum member Barhrecords.​
Each channel has Volume, Bass and Treble controls (plus Reverb and Vibrato controls on the Vibrato channel). No Bright switch.

If you like the DR sound, also try the Car Roamer model.

yek said:
Deluxe + Reverb = Deluxe Reverb? Not quite.
The Deluxe Reverb was introduced in ’63. The modeled amp is a ’65 silverface edition. It delivers a great, chimey tone and breaks up nicely when you push its volume. This amp has the AB763 circuit, delivering 22 watts through 6V6 tubes. More info.
Click to expand...

Hi Yek - just checking...you say the modelled amp is a '65 "silverface". The wiki says "blackface" and Ampwares says that the silverface didn't come out until '68.

Moderator
Yes, it's a blackface for sure. I have no idea why I put down "silverface". Corrected in OP.

No denying how many recordings and performances have been done with these amps. Sadly, after owning several of them (including the re-issue), I've never been able to get them to take pedals well unless I modified them a fair amount. I do like the Fractal results better than the actual amps I've owned.

^agreed, I like the Axe Fx model better than my real one.
P

Boogieman said:
I do like the Fractal results better than the actual amps I've owned.
Click to expand...

I've owned at least 5 blackface DR's over the years, as well as 4 or 5 Tone Kings... which are 4 6v6 amps, created to be "double deluxe reverbs". I'm now starting to sell them off, now that I'm so pleased w/ the post-Quantum DR tones I'm able to get.
I recently was at a show, where a former guitar student played the '65 DR that I recently sold him for $2500. I was wondering if hearing him play thru the amp, would create some buyer's remorse on my part. Not a bit!

There it is again - the famous Teddy Bear recording trick! :-D

I'd say it contributes considerably to the amp's sound since that video contains the best sound of the amp by far IMHO...

Where would the axe's mid control need to be set to match the actual amp?

So I recently dusted off my 2002 Deluxe Reverb Reissue for an out-of-town guitarist who was doing some shows in the area. I did a little practicing on it the other night for really the first time since I got my Axe FX three years ago. I decided to see how close I could match the AxeFX to the real thing, and came up with this patch.

I was running through a Xitone cab, which is a little on the dark side, so you might find this patch a little bright, depending on how you're monitoring it. I found that the actual Deluxe Verb sim was a bit darker and fuller than my amp, which still sounded great, but in the interest in nailing it, I switched over to the 6G12 Concert, which is a bit thinner and brighter. I used the Deluxe Verb factory cab, and found that using the graphic EQ in the Amp block to take away from 250 and 500 and add some 2k really helped. The result is extremely close A/B. The FX Loop in the patch was running out to my real amp, and I had two expression pedals hooked up to the Volume blocks to test. External 1 is set to the volume block for the Axe FX Amp block.

This was done on a Mark II using the Quantum 2.04 firmware.

Yek, one thing I just can't find is the Fender Blackface models volume pot function. Is it an input gain, preamp output to power section (master), or does it filter both at the same time? When creating Axe FX presets, I'm having a hard time determining whether to turn up Input Drive or Master Volume to replicate the amps. Thank you!

Moderator
old Fenders don’t have masters. The equivalent in the models is setting the Master to 10 (default). Leave it there for authenticity. So, use Input Drive. And use decrease Input Trim to 0.500 to simulate the amp’s Low input, if desired.
B

yek said:
old Fenders don’t have masters. The equivalent in the models is setting the Master to 10 (default). Leave it there for authenticity. So, use Input Drive. And use decrease Input Trim to 0.500 to simulate the amp’s Low input, if desired.
Click to expand...

Thank you, Yek. It's what I thought to begin with but tweaking the model that way sounded really off. I found out the tone controls make a huge impact on the breakup when set low, especially the mid (needs to be at 5!). Your verification is super helpful!
You must log in or register to reply here.
Share:
Facebook Twitter Reddit Pinterest Email Link
Top Bottom