Why is the guitar the coolest instrument ever?

We're creating an infographic titled "Why the guitar is the coolest instrument ever!" and I'd love your input. It could be anything - serious, whacky, funny, ridiculous - anything.

So, why do YOU think the guitar is the coolest instrument ever?

What do I think? It's the coolest because it's the only instrument where faking it is an international competition! Air Guitar World Championships Kidding of course (but half serious ;-) )...

Also, the greatest players are often referred to as Gods. I refuse to believe it's because of the 'double g' sound - 'guitar gods'. It's because the guitar is THAT COOL!!!!

Because, Nobody gives a crap, or even knows what kind of bow YO YO Ma used on what ever album he recorded in '96!
But any 10 year old into guitar prolly knows the string gauge, the type of pots, make and model of every guitar EV has ever used! (just kidding...kinda)
Also... if Jimi played it, it's cool!

That's awesome Kevin - I didn't think of that type of reason yet (the yo yo ma vs ev equipment reason) - so true!

And Jimi, that goes without saying But I'll probably say it.

I think it's the coolest because it's the most diverse and easiest to express your self instrument on the planet. Most everyone wants to play it and it can be made from beautiful and rare woods or a bits of junk.

Was thinking a little more about this... it is an intriguing question.
This don't necessarily MAKE it cool, but it is an instrument that has spawned multiple separate industries.
From Amps to people modding those amps, to people Modding THOSE mods.
Pedals and effects... the choices are endless, and most of which to support and target the guitar player...
The same holds true for other instruments, but to a much lesser degree!
J

I actually thought about this the other day. Guitar playing has gotten me exactly 0 chicks in my life. HOWEVER, I was married at 22 with no shortage of women prior to that, so maybe I just wasn't available during the age where chicks are attracted to guitarists.

This is why guitars rock:

I can't sing, but I love music so the guitar enables me to do something that I otherwise would not be able to do. I also think that it's the single most versatile instrument in terms of going from beautiful and soothing to thrilling to downright terrifying.

And you can strap it to your body and still have freedom to move and you can stand up in front of the crowd and ham it up if that is your thing. You aren't going to run around with a set of drums or piano on stage; you're stuck behind them.

before my time, but when Elvis broke big and played a guitar, I gotta think that made a huge impression. Also, the Beatles on Ed Sullivan

Because even 3YO girls find it irresistible! 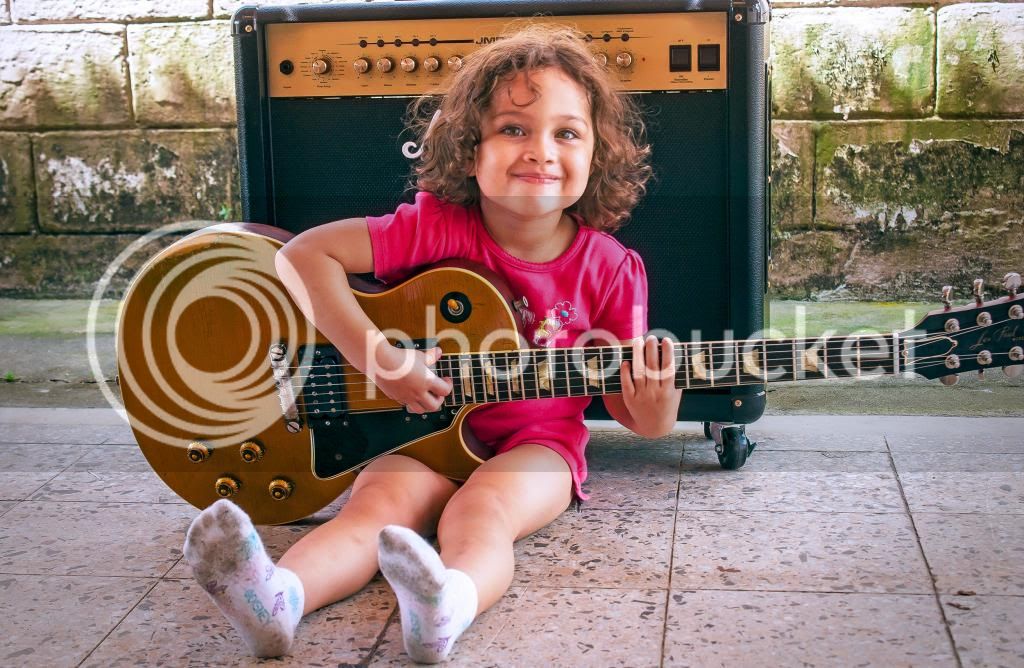 
nicolasrivera said:
Because even 3YO girls find it irresistible!

"While you may never be able to match the magnetism that Lenny Kravitz has with women, there is one hint you can take from the musician—playing guitar boosts your sex appeal. Even science says the cliché is correct.
According to a study published in Psychology of Music, a woman is more likely to give her number to a guy carrying a guitar case than a man holding a gym bag. For the experiment, an attractive man approached 300 women and after complimenting them, asked for their phone numbers. He did this in three different scenarios: holding a guitar case, toting a sports bag, or not carrying anything at all. Over a third of the women gave their digits when the guy was carrying the guitar case, 14 percent responded positively when he was empty handed, and only 9 percent shared their number when a gym bag was in sight."

shasha said:
And you can strap it to your body and still have freedom to move and you can stand up in front of the crowd and ham it up if that is your thing. You aren't going to run around with a set of drums or piano on stage; you're stuck behind them.
Click to expand...

I guess that's why key tars are so cool, then.

Very interesting question. Just throwing some ideas out there, but I think it is the electrig guitar specifically that is "cool". Nothing wrong with acoustics, but they seem more like a prop that allows a singer songwriter guy or gal to be cool.

Hmm... Got lots of half formed ideas about this. I think I need to come back later after thinking on this for a bit.

theblogjammers said:
According to a study published in Psychology of Music, a woman is more likely to give her number to a guy carrying a guitar case than a man holding a gym bag.
Click to expand...

And yes, growing my hair out and playing a guitar got me far more attention in school from the ladies than when I just had a bag full of Dungeons and Dragons books. +3 to all charisma checks, right there.
You must log in or register to reply here.
Share:
Facebook Twitter Reddit Pinterest Email Link
Top Bottom