Show Us Your FX8 Rig!

For now I'm running the FX8 via 4cm into a Mesa MK V25. Doing the channel switching from a block. I made a pair of hum buster cables from a 30' mic cord, soldered 1/4" Switchcraft ends on. I also have a Boss FV 500 set up as a master volume. Not a bad rig and easy to move in and out. I leave a cab there.

* edited to say* Wow, my picture looks sad but that's my gig what can I say?

Not much to say really, very simple..... initially I kept a couple of drive pedals on the board as a security blanket but now it's FX8 4CM PT100 and the Suhr for a whole gig. Simple.

Worked with a new sound company and operator on Sat, threw a mic in front of the cab with a clean sound that was comp/chorus/rev/delay and a pinch of the esoteric RC....single coil Suhr ML pickups... strummed one chord and he went 'holy fk that sounds amazing' 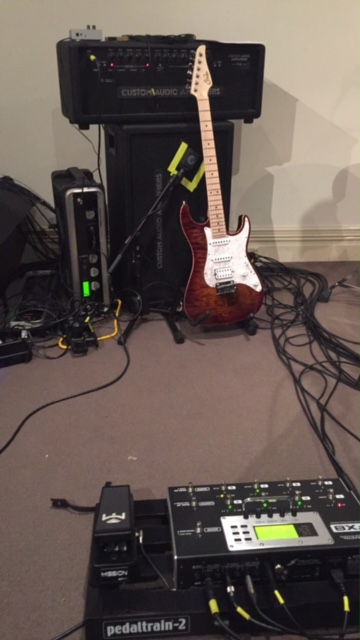 FX8 with a Moog expression pedal for volume and a Mission SP-1 for wah and other stuff. I really like how the Moog feels for volume. I'm using the small footswitch to control the 3 channels on my HK Tubemeister 36 since I don't want to take up a block for channel switching and I don't want to use midi until the firmware allows 4 scenes and 4 stompboxes in a preset. I have a ridiculous wire loom running back to the head (you can see it in the background). Here I was not using a speaker cab but simply took the XLR redbox out of the head into an Alto ts110a or 112a. It sounded surprisingly amazing. I'm between bands, but was gigging this rig sending the redbox out to FOH for consistently great sound out front and through a Mesa Thiele with an EV for killer on stage sound. Even on 18 watts I use a plexiglass shield.

The wireless is a Sony. I think it works better than my Line 6 G55. The first Sony I received had a problem with noise. I sent it back and this replacement has been perfect. Nice sound and fits on my board. Board is a trailer trash.

I have a lot of nice guitars, but for cover band gigs, my most used guitar is my PRS Swamp Ash Special with a 5708 in the bridge. Incredibly versatile and plays great. Same with my PRS Special 22 which I need to put back together after starting a piezo bridge installation that I mothballed after finding I received some bad parts. 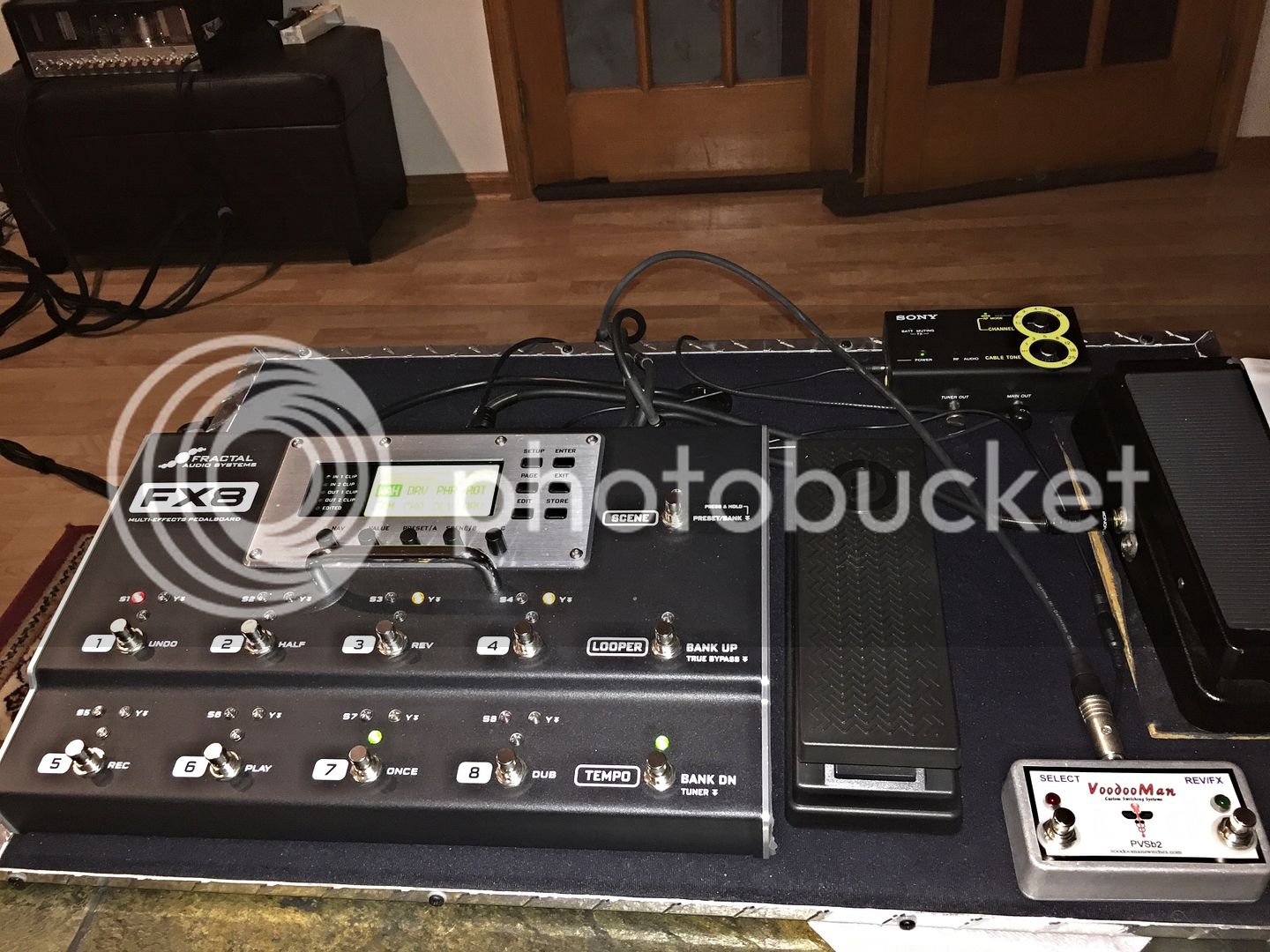 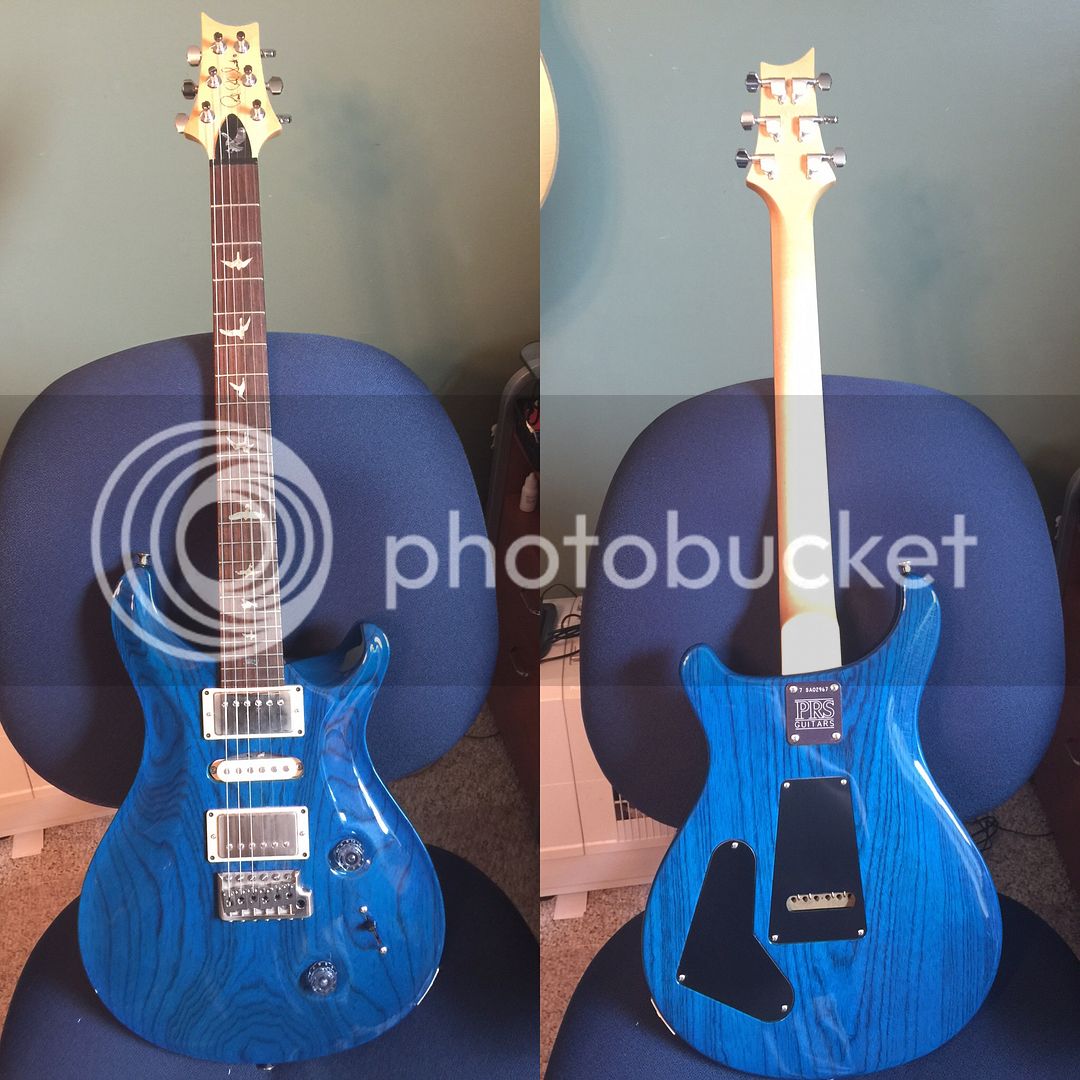 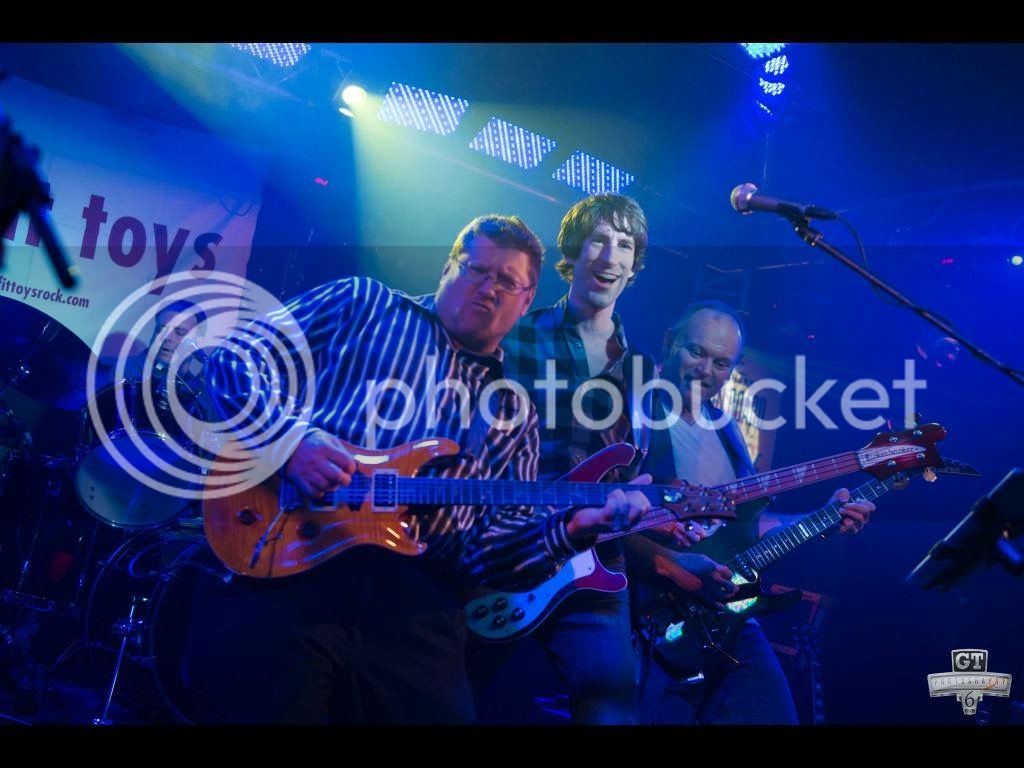 Whick model from pedal trash is your board?
And the measures?

My FX8 board stays he same, but I use it with a few different amp rigs!

feliperigby said:
Whick model from pedal trash is your board?
And the measures?
Click to expand...

feliperigby said:
Whick model from pedal trash is your board?
And the measures?
Click to expand...

reilly said:
My FX8 board stays he same, but I use it with a few different amp rigs!

What board is that?

Perfect size for the FX8 and two EV-1's did you make it yourself?

Also do you find you need two EV-1's? Can't work out whether I need one or two...

I went with two EV-1's to keep all future options open.

Plus, It looks better with a matched system IMHO.

Davus PG said:
What board is that?

Perfect size for the FX8 and two EV-1's did you make it yourself?

Also do you find you need two EV-1's? Can't work out whether I need one or two...
Click to expand...

I just grabbed a piece of wood from home depot, cut it to size and painted it black. I used L brackets to attach the FX8 and EV1's. I removed the feet from the EV1's and mounted them to the bottom of the board. Fits perfect in the Monobag i ordered for it..

I wanted 2 EV1's so I could have wah, pitch or delay quickly. You could get away with one but I figured two would give me the most flexibility.

Now all I gotta do is learn how to play!!

This is a Pedal Train Pro, my full ground rig. I don't usually bring the Mark IV channel switcher, usually I just use relays via scene changes.

brads4 said:
This is a Pedal Train Pro, my full ground rig. I don't usually bring the Mark IV channel switcher, usually I just use relays via scene changes.

Nice rig Brads. I also use the Decimator II G String - I have it between the amp FX send and the FX8 return. One thing I noticed was how much quieter the FX8 is compared to the G System I have. M G System board has the Decimator at about 1 o'clock and the FX8 at about 11.

I think the FX8 has it's own version of the Decimator built into the noise gate (intelligent) but I'm sticking with the Decimator becuase its so easy to change on the fly.

Below are a series of images of my new FX8, mounted on a LYT Pedalboard with two Ernie Ball VP Jr's. This is also a tutorial on how I did this. This was a first attempt and it came out really well. The LYT Pedalboard is 24" X 14", to fit in a Mono Tour pedalboard gig bag (on order). I wanted to bolt the FX8 and VP Jr's to a pedalboard, so it became one self-contained unit. I prefer the controller as close to the ground as possible, as that makes the buttons the optimal height off the floor. I have multiple pedalboards (3 Pedaltrains and 1 Trailer Trash). The thing about those boards is they ALL elevate the effects and 2 out of the 4 tilt them toward you. IMO, neither the FX8 or the VP Jr's need to be higher off the ground OR tilted. I got in touch with my buddy Mark Day and found out the size the of the screws FA uses to attach the feet. The screws are "pitch 6/32 (m3.5), length is 3.8" (10mm) pan head screws. I went to Home Deposit and picked up the following parts:
The LYT Pedalboard is 1/4" thick, so I figured I need 5/8" screws, which, naturally, they didn't have. SO, I bought both the 1/2" and 3/4". I wasn't sure if I was going to use the original feet, just the fender washer or both. As it turned out, the 1/2 inch was a little too short for either just the foot or the fender washer, so I ended up using both with the 3/4" screws. The feet on the VP Jr are s little smaller, and the thread depth into the bottom of them are pretty shallow, so I used the feet and 1/2" screws on the VP Jr's. I put the feet on for two reasons: 1) I know where the feet are, if I take this rig back apart and 2) the feet under the FX8 hang down almost the same amount as the LYT feet, so that's 6 more feet to add support and to help keep the board from sliding. If a little's good, then a lot is better, right??!!

THE TEMPLATE AND ATTACHING THE FX8:
I used 24" wide brown Kraft shipping paper and wrapped it over the board and taped it on the back with blue painter's tape. Then I had to figure out how to mark the template. I decided to rub olive oil on the feet and place the board and VP Jr's on the paper. You'll notice that I Dual Lock my expression pedals to the side of the FX8. I did the same thing with my previous rack setup, with a Midi Raider. I did THIS for 3 reasons 1) It puts a little space between the FX8 and pedal 2) I set my delay mix pedal so, when the front of the pedal is flush with the top of the FX8, I have exactly the amount of delay I want on a solo (via the slope adjustment) and 3) it makes the connection between the FX8 and pedals even more solid. This worked perfectly. The olive oil left little round wet circles where the feet went. I only had to ream out one hole slightly to get the screws to line up with the holes in the bottom of the FX8. The reality IS, those 1" fender washers give you a lot of room for error, so even if you make the holes way bigger than you want, the board isn't going to move, once all six screws are tightened.

After I was done attaching the FX8 and happy with the placement, I then drilled the holes for the VP Jr's. This time, I wasn't quite the superstar on getting the holes exactly in the right place to line up, so I had to ream a couple holes out. AGAIN, the feet still cover the holes and make the process more forgiving, so you don't have to be perfect.

FINISHING TOUCHES:
To clean it up, I attached my Rapco 4-channel snake (for now) and used surface mounts and zip ties to clean it up. My goal was to have the snake, power cord and guitar cord semi-permanently attached to the pedalboard, so I could just roll everything up and throw it in the Mono Case Tour bag. Dave Friedman of Friedman Amplification and Tone Merchants/Rack Systems is making a 4-channel Humbuster snake for me, so that's why I say "for now" on the Rapco. I also ordered a "left angle" power cord, so both the snake and power will exit the left side of the board.

A buddy of mine turned me on to using the glow in the dark tape and black on clear Dymo labels to label the board.

CONCLUSION:
So, there you go. An all-in-one, fairly lightweight effects unit, with tuner, and channel switching pedalboard that is less than 1/2 the maximum weight of airline baggage. The board with the snake, power and guitar cords weighs in at 22 pounds. That's less than 1/2 the weight of my previous rack alone, not counting the Midi Raider foot controller. Between 14 screws thru the bottom and 4 pieces of Dual Lock this thing is SOLID!! You can easier lift the entire board by the handle to pack it into your pedal bag, Pelican or SKB case. THAT is just the functionality of this setup. We ALL know how great the effects sound from this unit.

My thanks to Mark Day of Fractal, Dave Friedman and Rob Navarette of Tone Merchants/Rack Systems and Daniel at LYT Pedalboards. I LOVE my new setup.

Attaching Kraft paper to board

I labeled it "olive oil" so no one would think its urine. LOL

Under side of rig with feet sti

Dual lock holding VP Jr to side of FX8...

View of the FX8 feet and LYT feet

View of the FX8 attached from the under side

The LYT board is meant to flex. The feet appear to be slightly above the ground. Note the feet are deforming a little, I'm thinking that this will act like a lock washer to help keep the screws from coming loose.

Under side with everything attached

Snake, power cord and guitar cable all attached. It's time to MAKE SOME NOISE!!

I shined a flashlight on the glow-in-the-dark tape and underexposed the image a little, so you can see how the labels stand out.

AND the finished product in normal, ambient light.

I'm happy to answer any questions, if anyone likes the setup and wants more info.