Poll MFC vs LiquidFoot vs Something else

jjozwia said:
I cringe when I see posts stating the lack of an editor...
Click to expand...

Next, most people don't see paid software from a 3rd party in the same light as a free editor provided directly by the hardware manufacturer.

1) You're not an employee of Fractal Audio, and
2) Your editor isn't free.

Ok, so it's only $16, which is a steal for people who are in dire need of a way to edit their setup on a computer.

You shouldn't be shocked or offended when people don't know about your editor.

Even so, had I gone the MFC route I would have purchased your editor, no doubt. When I was originally on the wait list for the MFC (before I got skipped/passed over), I had a link to your site in my fav's. Unfortunately being skipped on the wait list is what started my search for alternatives which ultimately led me to my LF+Pro+, and it comes with its own editor provided by the company that makes the pedal. Software that is also advertised on their website and provided in their downloads section.

Maybe a great partnership between you and Cliff is in the works? Who knows? /wink /wink /nudge /nudge

jimnov said:
Will it allow me to move scenes to the front row and place presets above them like on the MMGT?
Click to expand...

No, that's a cable swap that "may" void your warranty. There's a video tutorial demonstrating how to do that in the MFC101 section somewhere. It's a pretty simple mod really.

EJ James said:
No, that's a cable swap that "may" void your warranty. There's a video tutorial demonstrating how to do that in the MFC101 section somewhere. It's a pretty simple mod really.

Thanks EJ!
How long did you have to wait for the LF Pro+?
I like the unit, but I've never seen it in stock?
I hate wait lists...

I hate wait lists too. Especially after being on the list for the MFC for a couple of months and then being completely skipped over. I was slightly pissed that even when they became available on the website I refused to order one.

It was a bit of a fiasco to get LF unit, if I'm being honest. I was never able to reliably receive notifications from their automated system (at any email address I tried), so I actually missed my first one. It was ready to ship to me within 15 days of ordering, or so I'm told.

It was actually the 3rd unit that got to me, but only because I opened a support ticket and checked in every 3 to 5 days requesting a status update. Even when the 3rd unit was ready their system never sent me notification. Thankfully "Tyler", the support guy who was working my tickets, was on the ball and made sure I got it this time.

I placed my first order on Jan 12. On Jan 16th I got a notification that it would be ready within 10 days. After that I never got another email from their automated system. The 2nd unit was delayed due to waiting on parts to upgrade the main board, and the 3rd (and final) unit took a little time to get more foot switches back in stock. I never got a notification when that unit was ready either.

My Pro+ finally shipped on April 11th and I got it on the 17th, so just a little over 2 months wait from initial order to delivery, but there were two units in between.

If you stay on them and keep following up you'd probably get it quicker than I did. Thankfully this seems to be the last midi controller I'll ever need. It was worth the wait, but the wait may not be even be a factor if you can get notification from their automated system. They don't charge you until the unit ships, so it doesn't cost you anything to reserve one.
Last edited: May 4, 2014

No offense taken, my post didn't come out quite right to further promote visibility of the Fedit editor. As far as scenes in first row here is a thread discussing:
http://forum.fractalaudio.com/mfc-d...ant-get-great-answer-one-but-here-goes-2.html

I appreciate your honesty.
I'll check it out and see what happens.

I would love to see a mark 4 MFC with the full programmable labels like the MM stuff.

Between being able to change label text and label color, that is a terrific feature.
J

barhrecords said:
I would love to see a mark 4 MFC with the full programmable labels like the MM stuff.

Between being able to change label text and label color, that is a terrific feature.
Click to expand...

the rest is crap compared to Little Giant....

i never understood why Fractal uses this Loud Switches and why the MFC is so hight....
You can not see the LED if there is Sun Light or Heavy Light on Stage... etc...

For me the GORDIUS are the best foot controllers in the World!!!!!

But also there are the MasterMind Footcontroller with everything mentioned here...
I hope to have a chance to test the units one time...
But well very Expensive...
https://www.rjmmusic.com/store/product.php?productid=16240&cat=108&page=1
Last edited: May 5, 2014

the rest is crap compared to Little Giant....

For me the GORDIUS are the best foot controllers in the World!!!!!

That is the ugliest thing I've ever seen. Can't imagine it being lighter than an MFC, and definitely not as light as a Liquid Foot.

See what I did there?

On a serious note, do you have any pics of your rig? I'd be interested to see how the LG integrates into a pedal board/controller setup.

I appreciate your honesty.
I'll check it out and see what happens.

I got on the Fractal MFC wait list on Oct 5th. Units were supposed to be ready "in time for Christmas", but come the 2nd week in January I still hadn't received my invite to purchase one. That's when I found out that people who got on the list a few days *after* me HAD received their invites. That's when (and why) I started looking at alternatives.

Considering the MFC101 is currently out of stock you may have a better chance at getting the LF unit before you'd get the MFC.

Let's face it. Fractal and FAMC are both boutique shops. Production and delivery times will always vary based on parts availability, or other unforeseen circumstances they may face when trying to keep up with production demands.

I've already said it once, but I'll say it again. The wait for the LF+ was worth it in my opinion. Having had this experience with buying from them, now that I know what to expect, I'd still order one again if needed. It's just that good of a unit.

That is the ugliest thing I've ever seen. Can't imagine it being lighter than an MFC, and definitely not as light as a Liquid Foot.

See what I did there?

On a serious note, do you have any pics of your rig? I'd be interested to see how the LG integrates into a pedal board/controller setup. 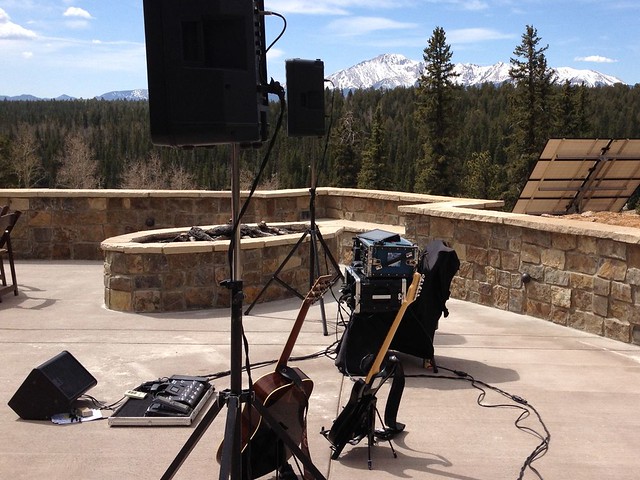 Gig was a bigger deal than it appeared. I was informed afterwards 4 security advisors of current French president and the model/ex-wife of former Pres of France were among the attendees. Glad I didn't know that during the gig!

What a beautiful setting to play a gig. I just hope the guests weren't put off by the hideous foot controller!!
J

Got my RJM Mastermind GT-16 this weekend.

I couldn't be happier!

Got everything programmed (using the easy and intuitive MMGT Editor) exactly the way I envisioned with 5 Scene's in the row closest to my feet, Tap Tempo in the same row, 5 Amps and a "Reveal" button in the next row up and then Bank Change, Looper and Tuner in the upper row.

The reveal button is programmed to jump to 2 pages of pedals.
Tuner shows up on the main display.
Tap Tempo button shows the BPM rate in the button. (How cool is that?)
Have the Mission RJM pedal setup for Volume and with a click of the toe switch, Wah, Delay Mix or whatever parameter I choose.

I can't believe how cool the actual LCD's look in real life.

No more glow in the dark labels that fade. Yeah!
Every switch has the right label, all the time.
Can't imagine a better solution for my needs.

Forgive the iPhone pics, but hopefully you can see how good the lcds look: