Poll MFC vs LiquidFoot vs Something else

yek said:
It'a bit weird ... on the FAS forum.
It's like opening a poll on the BMW forum: Which car would you buy: BMW or Mercedes? ;-)
Click to expand...

Well it is under other Midi controllers. But yeah, I get what you're saying.

Gordius Little Giant.
What I need, it does, and nothing else can do. That's why I have it.

solo-act said:
Gordius Little Giant.
What I need, it does, and nothing else can do. That's why I have it.
Click to expand...

What specifically? Related to the AxeFx II or something else in your rig?

barhrecords said:
What specifically? Related to the AxeFx II or something else in your rig?
Click to expand...

Mostly with other gear/software, but I do operate axe-fx manually about half the time. The other half it's automated by backing tracks.

What specifically for Little Giant vs. other footswitches? A lot!
I need everything below, the LG has it all, and AFAIK others can only do some.


That's off the top of my head.
Just thought of a couple more:

I've only seen mainstage (apple software) or such for show automation but pretty cool that a controller has all the capability built in. Impressive.

I've only seen mainstage (apple software) or such for show automation but pretty cool that a controller has all the capability built in. Impressive.
Click to expand...

You should check out Digital Performer.

I could be wrong, but I believe Apple's logic with MainStage requires each song (and it's midi automation track) to be opened/closed separately, which is extremely inefficient. In DP, all your backing tracks are in a list and you simply cue/play from that list remotely using any command in the midi protocol, very similar to Ableton, but DP had that capability at least 15 years ago.

Metric Halo is nice hardware, and the MIO console interface software can either be told to listen to Mackie HUI protocol or EuCOn for midi commands. Doesn't matter because the LG sends the full library.

Problem is backing tracks, plugins, DAWs, and mixing board interfaces all run on computers and the commands get in through a USB cable. Most midi footswitches don't come with a routable midi interface built in.

The LG has a 2x2 interface and you can select routing on it's editor software or on the unit. 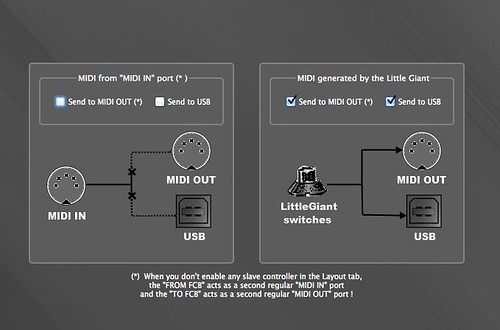 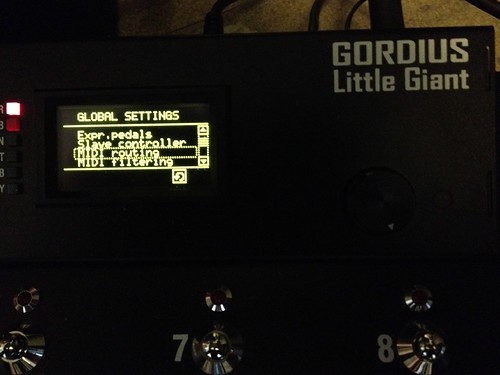 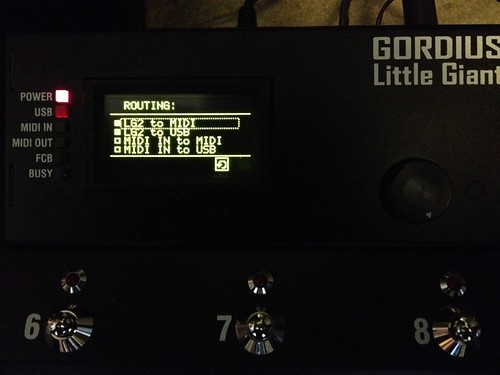 It even has an on-board midi monitor. I dig it so much I had to get a backup unit.

I've only played as a sideman on automated shows so it was all out of my hands.

It's pretty surreal though, when everything syncs, every night.

barhrecords said:
What specifically? Related to the AxeFx II or something else in your rig?
Click to expand... 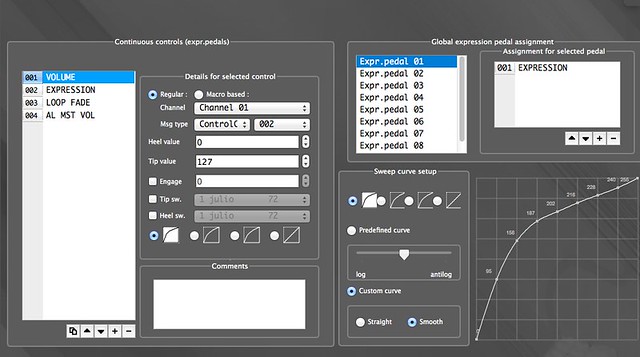 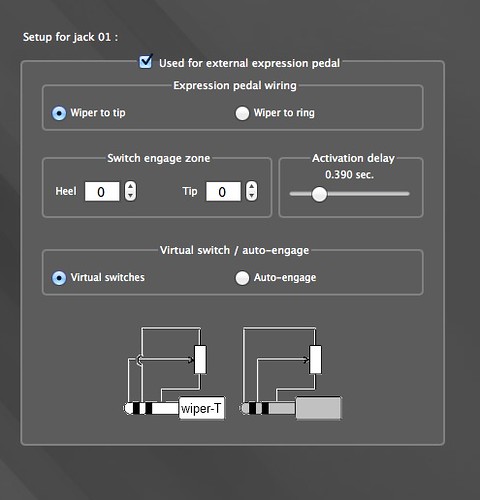 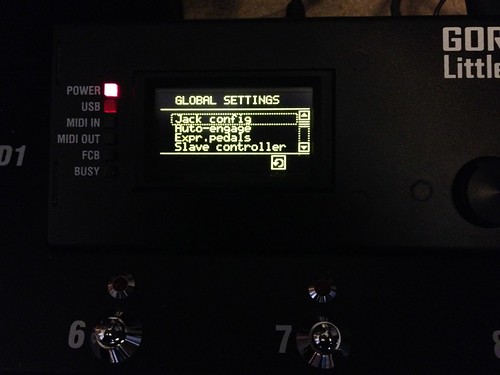 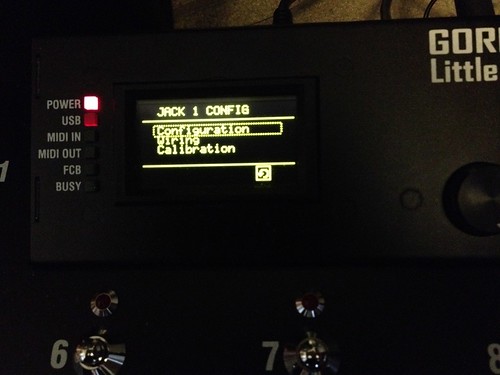 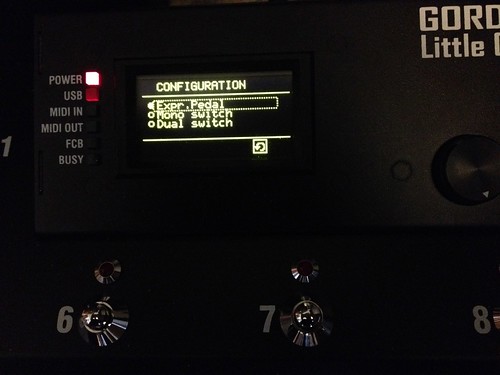 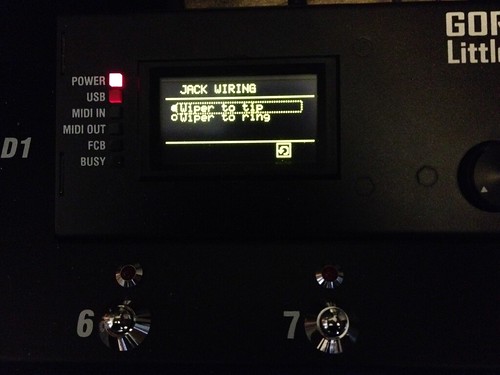 barhrecords said:
I've only played as a sideman on automated shows so it was all out of my hands.

It's pretty surreal though, when everything syncs, every night.
Click to expand...

Strange at first, but very cool. All I do now is sing, play and perform…imagine that.

liquid foot... works with anything, down the road you could change preamps add stuff in your rack, get rid of axe, great support. 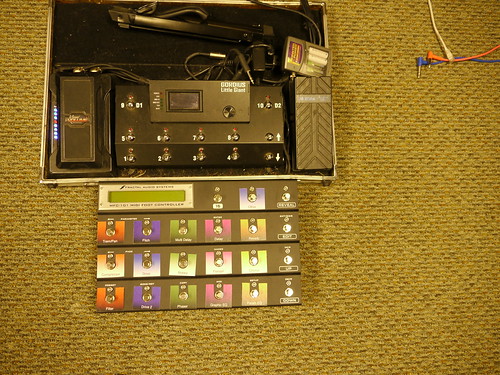 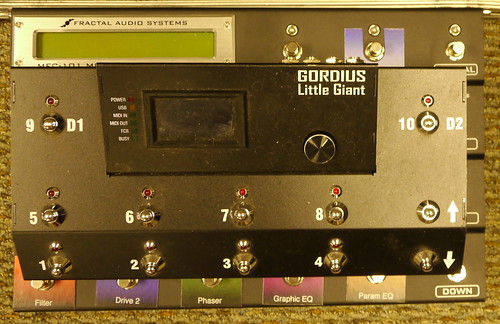 My Rocktron All-Access controller served me VERY well for many, many years, but being that the new controllers offer so much more with software integration and such, I chose that I would upgrade to accommodate my AFX purchase.

I believe that you can't go wrong with any of the choices you have in the poll... all depends on what "perks" you want and what fits your needs best. The MFC is a great controller, I'm sure, but I really wanted a controller that offered the integrated LCD screens, so that put the MFC out for me and left me with the LF+ and the RMJ MM. I did a lot of research on both and loved each one for specific reasons.

The LF 12+ offers a lightweight, small-footprint controller that is beyond powerful and would have no problem controlling anything from a single AFX to an entire rack full of gear and more. From my experience with the emails, I personally got a very quick response (30 min. or less) with their "trouble ticket" system when I was inquiring about the products. The price was obviously pricey, but still cheaper than the RJM. Back in the day when the Rocktron AA came out, it was around $1K, so I was expecting to pay somewhere around that range anyways. One of the downsides I found with the LF+ was that, after watching many of his videos and such, I always felt somewhat lost in what Jeff was trying to convey in the vids. A bit over my head sometimes. I know that I'd have a large learning curve with this unit to fully use it to its maximum potential.

The RJM MM looks like a nice product as well... but for the GT, it's VERY expensive! The 10-button is also VERY expensive. The MMGT, like the LF+ offers SO much! It also can control a single AFX or an entire rig without breathing hard. Obviously also has the LCD screens (bigger than the LF, BTW) and has larger typeface fonts since they're graphic screens and not just text screens. The 10-button was too small for my liking and the large GT was too big, so I was going to go with the LF+ until the MMGT-16 was offered for the price of the 10. Then I was intrigued. I contacted RJM directly and had a few great conversations with Ron and Sherri. VERY nice people to deal with. I own one of their rack gizmo's and they went above and beyond to help me set it all up... all via phone, so the customer service is 2nd to none!

In the end... due to limited pricing, the fact that the RJM offered a 6-button across layout (which I like for my needs) and the customer service that they offer, I went with the RJM. I also like their software (for it's ease of use) as well as their vids and can relate to what is being said, rather than feeling like everything is over my head or being stated in a very misunderstood manner. I'm a musician and not a computer science engineer and frankly, have enough to deal with in learning the AFX. The last thing I need is a controller that I can't figure out as well. I may as well never try making music again and just be content fiddling with gear. Haha!

Either way, I think that you'll be set with whatever you choose. The controllers today are so powerful and deep, there's no reason to think you'll outgrow any of them anytime soon. If they fit your size requirements, options and price range, I think you'll be good with most any out there, but in speaking of the LF+ and RMJ line specifically, I think both are great and will offer you everything you need.

What is The Thing with the LF+? How would it make my life easier? It has Lcd's, ok, but what does that mean to my stomping?

aziz said:
What is The Thing with the LF+? How would it make my life easier? It has Lcd's, ok, but what does that mean to my stomping?
Click to expand...

My ideal controller would be a mix of the LF+ and the Gordius.
Gordius for it's dynamic memory:
almost no limit on the number of presets so you don't need scenes
Conditional programming
Variables
The problem is, if you have different layouts with different IA's,you need the little screens.
And that's what I'm missing with the Gordius.

ok I am interested now too. I do have 2 questions about these controllers. 1. Is their performance the same on all these? meaning is there any latency in one design opposed to the other? 2. How expensive would cracked/damaged lcds be to replace?

Sorry mate, but that is one butt ugly controller!!

aziz said:
What is The Thing with the LF+? How would it make my life easier? It has Lcd's, ok, but what does that mean to my stomping?
Click to expand...

Just more feedback. The labels can change depending on the function of the switch. Also the color can be programmed too. For me, some of it is the aesthetic too; I just dig the way the colors and LCD look on stage.

And I think the Mastermind looks better than the LF too.
S

I also bought a MMGT16, just the right size and features I need.

spacebard said:
I also bought a MMGT16, just the right size and features I need.
Click to expand...

Nice! Are these in production?