it might have been covered already, but I guess I am no good with searching the forums because I haven´t found what I am looking for ...


so my question is about the output level knobs behavior - I know that the ideal position should be at noon, I believe, but I found that the sound is not only louder, but a lot different if the knob is set lower - it seems the amps sound more distorted (in a good way - they have a more overdrive sound to them) than when I put it higher. The thing is the difference is not really subtle. So I was wondering if there is something I am doing wrong or whether this is normal and I have to deal with when dialing in tones.

And if it is the infamous fletcher munson thing, than so be it, but I don´t like it I want the tones to be at least somewhat similar in the gain department ...

any opinions on this?

output knob is just a level, I don't think it effects the amps tone.. I think what you are experiencing is Fletcher Munson effect, which when you turn it up louder stuff sounds different. Even real amps sound different cranked.

What are you running your Axe FX into and does it expect the signal level you are giving it? All outputs are +4dBu.

Output knob position did affect for tone slightly when i did some compare tests ,spectrum analyzer did show some high end difference there when i was recording clips. I did thread about that some months ago can`t find that anymore ,but its there somewhere i think so. But good news is there is now those Output Knob digital values you can set that always same position ,I`m still whit older Firmware i don`t have that feature unfortunately that why i always make sure no one touch those knobs.

Output knobs will have no effect on amp gain levels. They are located after the digital to analog converters and have zero impact on the rest of the Axe's signal chain. Analog outputs are spec'd at 600 ohms impedence (pretty low) so you should not be getting any kind of loading losses unless the next device in the chain has an input impedance of less than 6k. If you are hearing a noticeable difference in tone (aside from fletcher-munson), something is not right. I would suspect the input of the next device in the chain. What are you plugging the Axe into?
Last edited: Aug 3, 2015

Which knobs are we talking about, the level knob in the amp block or the 2 physical knobs on the Axe?

What are you plugging the Axe into?

I am going straight to FOH and for monitoring I use some cheap active small pa going from output 2 so that I have independent control over it. Most of the time I can hear FOH sound a bit too and that is why I noticed the difference. For my monitor I make only small changes and usually run the level from 9 to 10 o´clock. But for FOH the output level 1 is set on noon, sometimes I forget to change it from when using it at home with headphones at 9 ish to noon. - that is when I noticed the difference and was curious why it is happening.

There is really no discernible difference with the physical output knobs, other than the normal reaction with the room, FM curve, etc that is apparent with any "level" or perceived volume control.

Dimebucker is referring to a test he did where there was about 1 dB change when we compared a 20% knob position with a 80% position (or something like that) then increased the gain of the 20% recording to match that of the 80%. There was no discernible change, but yes in some analyzing program, there were minute differences.

He also said he can for sure hear a difference between 48% and 49% on the out knob, for example.

So I believe he has the best ears in the world and I wouldn't let his application apply to you, Gytaxor.

There is no applicable difference regarding physical out knob position.

Tonal variation between different monitoring devices can be huge, especially at different levels. Best way to narrow it down is to use the Axe's looper to play the same thing repeatedly and record some samples at different output knob settings (make certain you are not clipping the input of your interface), normalize the levels between samples, and then compare them. That would help eliminate fletcher-munson effects. If you can't detect any difference, then you know the issue is outside of the Axe.

Dimebucker said:
Output knob position did affect for tone slightly when i did some compare tests ,spectrum analyzer did show some high end difference there when i was recording clips. I did thread about that some months ago can`t find that anymore ,but its there somewhere i think so. But good news is there is now those Output Knob digital values you can set that always same position ,I`m still whit older Firmware i don`t have that feature unfortunately that why i always make sure no one touch those knobs.
Click to expand...

Whao. Hang on a sec. Let's not let this response get buried in the conversation. People are saying "no, there's no difference...", but we have someone who's tested this with a spectrum analyzer and obtained numeric data that there is a difference. That seems rather significant to me. More significant that people saying "there shouldn't be a difference" or "I don't hear a difference".

Hook the Fractal up to a DAW and record the different output knob positions and compare the results in a spectrograph plug.

I like the BlueCat Audio analyzer because it can overlay multiple freq plots from different tracks and show the difference plot too.

I wouldn't be surprised if there were some very subtle differences between larger changes in the output knob. In theory it shouldn't matter, but in the real world, no circuit is perfect. However OP seems to be having a more drastic tonal change. You might hear a very subtle tonal shift, but you should not be getting any drastic differences unless there is some serious loading or clipping going on in the following device.

ok, I did not mean to start some hot debate over whether there should or should not be a difference. Personally I do not care, because it sounds great with almost any value of the ouput knob. If there was a difference I would want to know so that I could tweak my patches accordingly. My aim was simply to understand the AXE better so that I could get the best out of it and not shoot in the dark.

so my conclusion pretty much is, that I simply need to adjust for the volume difference and tonal response of various monitoring devices I use.

cool, thanks for your replies guys. you are the best

No sweat Gytaxor. Yeah, you'll have to tweak for each output device. Unfortunately there's no way around that. In some cases you might even want to make different presets for each situation. I try to keep separate presets for recording/practice and live tones. Same bones, but my live presets are usually more midrangy and have way less reverb and delay.

jdosher said:
Whao. Hang on a sec. Let's not let this response get buried in the conversation. People are saying "no, there's no difference...", but we have someone who's tested this with a spectrum analyzer and obtained numeric data that there is a difference. That seems rather significant to me. More significant that people saying "there shouldn't be a difference" or "I don't hear a difference".
Click to expand...

the problem with the internet is that if 1 person finds a difference and claims to hear a clear difference between 48% and 49% on the volume knob, suddenly it is a flaw and a real issue. many people freak out and suddenly can hear what that 1 person has reported. and if they use gear to measure it then it just has to be true!

i'm sure there is some minute difference in the frequency spectrum of the output knob between large range differences. but it's generally so small that it is does not affect the real world usage of the gear. that's what really matters.

there is not a discernable difference between 48% and 49%, sorry. there may be a difference between 20% and 80%, but if the perceived loudness goes from 75 dB to 95dB when making that change, any differences caused by the knob being changed are completely overshadowed by the physics of sound in a room and the dB change.


Gytaxor said:
ok, I did not mean to start some hot debate over whether there should or should not be a difference.
Click to expand...

don't apologize. you had a question and you asked. that's a good thing! i just think it's important to point out a very isolated experience that is not an example of normal.

i'll try to find the thread so people can draw their own conclusions. let me know if you hear a clear difference in the high end between 48% and 49% on the output knobs though
Last edited: Aug 3, 2015

Quite true. An astonishing number of players out there still can't even hear when they are out of tune. :lol

i found the thread dimebucker is referring to. i'm honestly not trying to present anything or anyone in a bad light. i just happen to completely disagree with his findings. this was done before we had the Out knob % indications.

unfortunately i have deleted the recordings posted in that thread. my first test was different performances of the same riff at different output knob settings. i didn't use a looper and at the time wanted the slight variations, though i tried to play the riff exactly the same.

here is a screenshot of his analysis comparing a recording of Out 1 at 9 o' clock gain adjusted to match the 12 o' clock (he said the gain adjustment was needed for his analyzer). 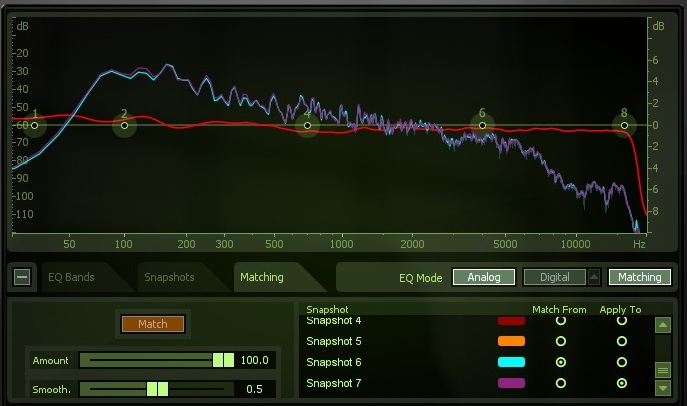 you might find it hard to notice 2 lines - blue and purple - for the frequency response. those 2 lines represent the similarity of the takes. it's almost exact, the most visual variation being around 125 hz, probably due to me hitting the strings slightly differently.

the red line near the x axis is what you'd need to change in EQ for them to be exactly identical. it's less than a dB of change here and there for 2 different performances of the same riff. i doubt those changes come from the out knob position.

Yeah its impossible to adjust those output 1 and 2 knobs 100% exactly same positions ,if you have move those knobs little bit. And your tone will chance a lot ,if you chance/move your output levels knobs.
Click to expand...

i made a 2nd recording using a looper this time to take out any performance variations. in this recording there were multiple sections, some repeated for closer comparison as the clip got longer. section 2 was a copy/paste of section 3, for reference sake. dime was sure he heard a difference between those 2 sections. but they were exactly the same.

i am not saying what HE perceives is wrong. but i do disagree that it is the same with my Axe, and most likely majority of other Axe users.

at any rate, we now have % indicators for the out knobs. but dime isn't using the FW with that feature, so he unfortunately has to make sure he doesn't bump his Out knobs at all for his usage.
Last edited: Aug 3, 2015
You must log in or register to reply here.
Share:
Facebook Twitter Reddit Pinterest WhatsApp Email Share Link
Top Bottom