I'm a sucker for player grade guitars, and stumbled across a fun one. This is my first SG, and so far I love it!

It's a 1969 SG Standard. The "bad" parts about it when I got it is that it had been refretted, the tuning machines were changed, it did not have the original pickups, it was missing the witch hat knobs, the Maestro Vibrola was removed and they actually turned it into a string through body tailpiece. The good part is that there is no neck or headstock damage. And no cracking around the control cavity. The body is in great shape.

I put vintage style tuning machines back on it. I ripped out the EMG pickups and all EMG related electronics, which included all the pots and input jack. I replaced the pickguard (they had an un-original 3-pickup configuration), and I put in a set of David Allen Powerage pickups. Just a side note: I have a 1973 Les Paul with original T-Top pickups. I've tried both David Allen and Brandonwound T-Top replicas, and they both are pretty darn close to the original. 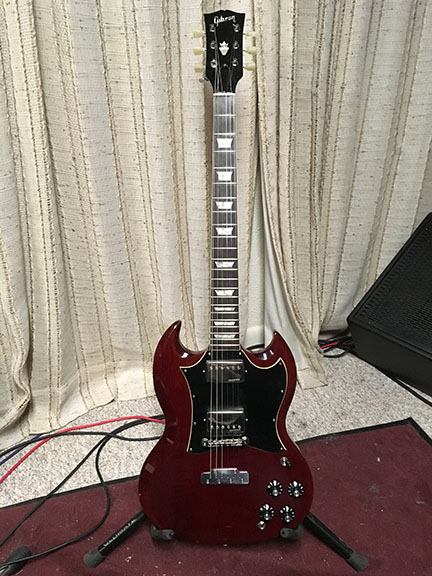 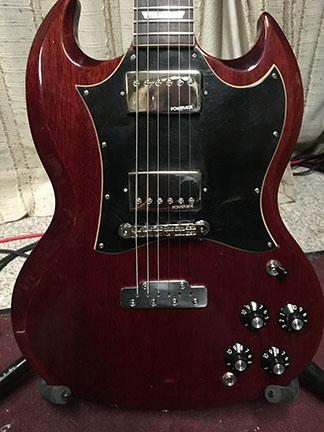 and the back side so you can see the string through. 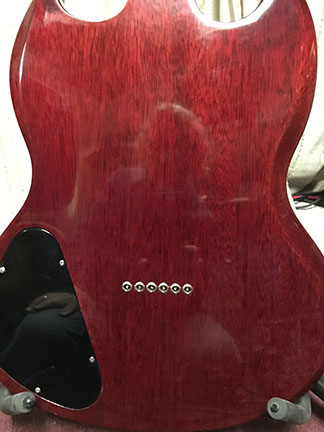 And this is what is was like when I first got it. 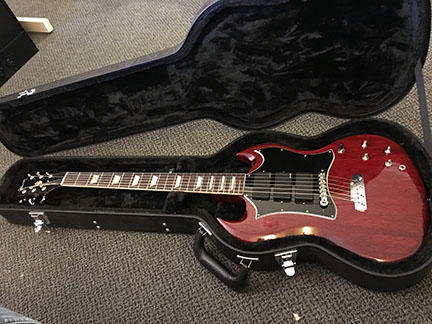 And a sight that is just plain wrong. You should never ever see a 9v battery in a 1969 guitar. LOL 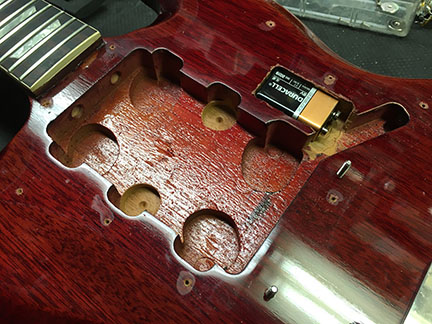 I'll probably just leave the actual tailpiece part as is. I had thought about adding a mock Maestro piece to it like the Derek Trucks model so that it looked a little more original. But the chrome of the tailpiece doesn't bother me as much now that I changed out the pickups. It kind of balanced out the look. I don't have another SG to compare it to, but I would be curious to see if the string through the body increases sustain or not.

I bought an 07 US Explorer and someone I know told me the original 73 Explorer he owned had Tarbacks. So I found a set from an original 73 SG and they sound great in my Explorer.

Sorry, didn’t mean to hi-jack your thread. Your SG looks like a beautiful guitar. Just learned to play Elevation...would love to give it a try on your SG. If Imrecall, think it’s pretty close in age to Edge’s SG.

Toopy14 said:
I bought an 07 US Explorer and someone I know told me the original 73 Explorer he owned had Tarbacks. So I found a set from an original 73 SG and they sound great in my Explorer.

Sorry, didn’t mean to hi-jack your thread. Your SG looks like a beautiful guitar. Just learned to play Elevation...would love to give it a try on your SG. If Imrecall, think it’s pretty close in age to Edge’s SG.
Click to expand...

Pleas, hi-jack all you want. I love talking shop. An Explorer is on my list to get at some point too. I'm just playing that game of selling some things and buying more of others, lol. I was a Tele guy for years, and still am. But I'm finally forcing myself into the world of humbuckers. There is a lot to love about a T-Top. I'd be curious to hear the difference with the Tarback. Is it just a wax potted T-Top? More winding? Longer magnets? It looks like from a little more searching online that 72 was the last year for T-Tops on the SG. My 73 Les Paul has T-Tops, but I think the Les Paul may have had them for longer after the switch on the SG. Sounds like the Explorer also had the Tarback about the same time as the SG then. Funny, I had always assumed that Edges Explorer was T-Top, but I suppose it really is a Tarback?

I almost bought an Explorer in the late 80's. One of the Designer series. But I bought a Desert Sun Yellow Ibanez RG550 instead. To think how different things would have been if I got the Explorer!

Fro said:
I'm just playing that game of selling some things and buying more of others, lol.
Click to expand...

You must be married too then!

My mistake, my Tarbacks are from a 74 SG, so you were right on the money. Not sure about the magnets or the winding, in the Tarbacks, I can tell you though that mine measured at, Bridge 7.86 k & Neck 5.38 k and they are definitely filled with wax on the back. In the Explorer they sound very woody, lots of nice mids.

Not sure if you heard some of the Beautiful Day clips I posted, recorded with my Axe-Fx into my AC30, but they absolutely nail the tone in my Explorer. Lucked out on this guitar, the grain is beautiful and I think I only paid $700 CDN ($540 US) for it! Of course I had to make it look like the real deal, in terms of knobs, etc. lol

Now, as for T-Tops...the story I read, was that the T was put there to indicate the top of the bobbin so the winders would wind them all the same way. Not sure how true it is. However, they are great sounding pickups, so there must be something about the material they used to make them, that factors into the tone.

Edge's Explorer is a 76, but it's from the first part of 76 so it has the fatter, baseball-like neck, as Edge and Dallas would say. Apparently Edge prefers that neck, so any time Dallas comes across one, he buys it. His original Explorer has been retired now. His yellow LPC sold for $240,000 at auction, just imagine what the Explorer would be worth...bet you wish even more now you would have bought a 76 Explorer, back in 80!
Last edited: Sep 19, 2018
2