My 10th Year with The Magic Box

2018 marks my first decade with the Axe-Fx. In 2008 I had an 11 space rack with state of the art rack gear. A Custom Audio Electronics 3 channel preamp, Eventide Eclipse, Lexicon MPX1, Roland SDX-330, Boss SE-50 with a VHT 2502 poweramp into two CAE 1X12s loaded with Vintage 30's. Switching was via a Digital Music Corp GCX. The shock mount Kriz-Craft rack weighed 100 lbs empty. Loaded it was 200lbs.

I was a member of the now defunked Huge Racks message-board. There I had learned of the Axe-FX Ultra. Most of the leaders there scoffed at this digital abomination but I thought the sound clips sounded pretty good. There wasn't any place where I could try one. Eventually I decided to pony up and try it. Either I would be convinced or sell it right away. In those days the black box required a lot more tweaking. I spent a lot of hours going back and forth between my preamp and the Ultra though the VHT and 1X12s. When it got to the point where I would get confused which one I was playing through, I knew I was on to something. After a few days I decided to go against the current mind set and do the unthinkable. Keep the Axe-FX and sell my preamp and some of my rack gear. Everyone thought I had lost my mind. There were a handful of us that switched to the Axe-FX but trying to say that this digital demon was equal to tubes was blasphemy. Therefore a non-starter conversation. Some swore us off as an apostates.

My first Axe rig was using the VHT and 1X12s:

This was good but a lot of the amp sims sounded similar. For example, I couldn't get a spanky Fender clean or a proper VOX. The FRFR gurus talked about how guitar speakers colored the tone and that the only way to get the full meal deal was to use monitors. At that time QSCs were the big deal. I took my rig down to a music store and plugged them in. It was night and day difference. It was like putting ketchup on every meal. That Celestion flavor was on everything. It was time to sell the VHT and speakers.

The QSCs were a good and major step forward. There still was a slight tone to them that wasn't reproducing audio honestly. So in 2009 I bought the new big deal: FBT 12MA.

This photo is actually from 2010. By then I had switched to the Liquid Foot controller and added a rack interface to make cabling easier. FBT is no longer in vogue but the serve me just fine.

That same year I flew to Kenya Africa where the electricity is sketch. I used a voltage regulator and the Axe performed without a hitch. I used a Liquid Foot mini. EAW monitor not included. Fly rig: 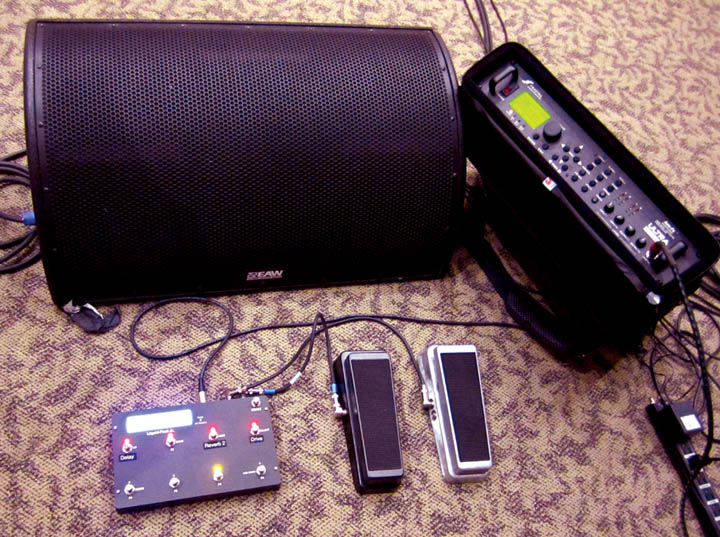 Over the next few years I upgraded to II XL+, an MFC 101, added a DBX IEM processor that is providing room simulation to give depth and less isolation with IEMs and a Shure PSM900 to transmit to my IEM pack. Actually this photo is from 2015 but nothing has changed.

Every once in a while I daydream about getting a tube combo and a pedelboard but every time I think it through, it doesn't make sense. The Axe-FX is still the best solution for me for the type of gigs I play. It's not that I'm loyal to Fractal. I would switch if something were better. But until that day comes, I'm sticking with the black box.

Fractal Audio Systems
Moderator
Thanks for the support. BTW, most of the pictures aren't showing for me.

I can see a few of the pics, but not all. I too spent many years on the rack. Took a chance on an Ultra back in 2010. Been using Fractal gear ever since. I have an Axe in my home studio and use an AX8 live. Never been happier with my tone.

Congrats! I am coming up on mine this summer. Hard to believe.

Sorry. It's a strange DNS issue with the server. It'll be fixed shortly.

All fixed now. Thank you for your patience.

Awesome man, one of the oldskool

I don't know what year I picked up my first Axefx but have loved the ride.

A world class company, many world class products, 100% dedication, can't ask for more than that.

xpenno said:
Awesome man, one of the oldskool

I don't know what year I picked up my first Axefx but have loved the ride.

A world class company, many world class products, 100% dedication, can't ask for more than that.
Click to expand...

Hi mate, I remember you trying out my Ultra a long long time ago. Back on board recently with and AX8 after a while away and thoroughly impressed. Hope all is good with you!

Happy anniversary.
So cool seeing the the rig progression, thanks for sharing.

MKeditor, I used to hang at HRI too. We've visited a few times throughout he years, brings back some memories. Nice to see you posting your rig. I picked up an Axe about 3 years ago but I've never used it out yet. I think that's goin to change soon though. Might hit you up for a few tips as things progress?

Moderator
I remember HRI. It was either there or TGP where I first spoke with Cliff who was posting there. I think I'm at 12 years (I think...2006.) Fractal was just an upstart at that time, and someone (Armand, Ar...something) was posting clips of this 'new thing' that was a game changer. There was SO little information on it at the time. Sadly, there were 3 reviews on the dreaded Harmony Central that I read over and over. Waiting list for 3 months, and the Axe Fx Standard was in the house. Went from Standard to AxeFx II, then + not long after that for FASLink.

My journey much the same after that. I started with a Mesa 20/20 and a V30 upright cab (Standard), but like you it had the 'sameness' of that cab. I went to FRFR for a more diverse sound, and tried a few options that didn't quite sound right. For years I played a pair of Atomic 50 watt tube poweramp/cab's, and they did the job, but didn't work out as they accentuated bass freq's too much. I upgraded to powered CLR's a few years ago, and have been have not been happier.

I would have never thought that after all the amps I bought before Fractal, that I'd be here 12 years later with zero GAS (for amps.)

My Guitar stable sure is purty tho...

POB said:
Hi mate, I remember you trying out my Ultra a long long time ago. Back on board recently with and AX8 after a while away and thoroughly impressed. Hope all is good with you!
Click to expand...

I do remember, yes!

Good to have you back

HRI was a great forum, had unique perspectives and some really knowledgable members.
That where I got turned onto the axefx also.

Reade said:
MKeditor, I used to hang at HRI too. We've visited a few times throughout he years, brings back some memories. Nice to see you posting your rig. I picked up an Axe about 3 years ago but I've never used it out yet. I think that's goin to change soon though. Might hit you up for a few tips as things progress?
Click to expand...

I'd be happy to share what works for me.

I’m coming on two years with my fractal gear. It has been the most satisfying years of my guitar playing life. It’s good to year this joy can last for a decade. Friends don’t let friends play tube amps.

Mine does not work so well.

I used to tell everyone I would NEVER use anything but a tube amp...