Status
Not open for further replies.

DaAxeMan said:
The issue isn’t that at all. We buy preset packs or download presets from other users. Nobody wants to take the time to combine presets at that point. Yek makes a great point of needing presets per song as well and don’t forget getting rid of factory patches is something we all would love to avoid.
Click to expand...

Maybe there needs to be a way to save and combine scenes into presets.

I have AB’s 1000 tone bundle and only use a few scenes from a few amps. I’d love to easily combine 8 different presets worth of stuff into one preset with scenes from each amp so that I’d have one preset for a bunch of BF, Tweed etc tones. Don’t needs tons of presets, just want everything I like in one or two.
D

unix-guy said:
Please don't presume to speak for everyone.

Many people here do in fact remove all factory presets. If you came from a pre-XL Axe Fx II it was almost a requirement.
Click to expand...

Ok gee sorry, I personally would love to keep factory patches as a bonus but some people consider them poison and must immediately dispose of them.

DaAxeMan said:
some people consider them poison and must immediately dispose of them.
Click to expand...

some just want to free up 300+ preset slots for their own. which is the point of this thread *shrug*

i've never been in a situation where i

if people want to keep them there for some safety net, then that's up to them. but that's also where you get "more presets" from.

some of us are official Beta Team members and test things all the time, so we leave them on the unit for that specific reason. but if i wasn't an official tester, and i needed more preset slots, they'd be gone in an instant and i'd have over 50% more preset space.

have you ever changed to a factory preset that you've never used before at a gig or any situation?
D

Factory presets were an example of what SOME people would like to use the slots for. Just an example. You can debate factory preset use with someone who has nothing better to do. Good day sir.

decreebass said:
With user customizable banks - like if I only want 4 presets in one bank, cool; 13 in another? Then you could view all your presets by either the current method (000-511) or through your custom view (banks).
Click to expand...

There are at least 3 issues: (1) available active hardware memory capacity (currently limited to 512), (2) the number of possible presets each of us might want to keep around "on-board" not requiring a computer (edging to 1024 or 2024), and (3) their on-board management/organization

In some dream world of possibilities...

To address (1) and (2)... For on-board memory capacity, perhaps in the next hardware iteration (III XL or IV), an user-expansion SD card slot or USB drive provide the best of both worlds to be able to store multiple banks (e.g. 64 banks of 128 presets or 256 banks of 32 presets) that could be copied into active bank memory. Or, if folks are willing to have potentially longer preset load times (from expansion storage), this extended storage could simply extend the number of hardware banks (e.g. from 4 to 64), ideally with banks being able to be named.

Regarding (3)... Playing off of @decreebass's suggestion, for truly flexible bank management, customizable preset "sets/banks" (~song sets) structure that can be selected or dragged-and-dropped into active Axe memory. Each "set/bank" could be configured to be closed-ended (preset +/- keeps you in that group), wrapping (preset +/- wraps between last and first preset in the group) or continuous (preset +/- will cross into the next group - like current behavior). Of course there would be UI challenges, as well as dealing with different bank sizes, aligning them, and making sure they fit in avail active memory.

DaAxeMan said:
Factory presets were an example of what SOME people would like to use the slots for. Just an example. You can debate factory preset use with someone who has nothing better to do. Good day sir.
Click to expand...

i am speaking to that example. is that not allowed?

You people sicken me. Always wanting MORE and MORE !
Oops , sorry. This is just a WISH thread.
If it’s easy and possible , it might happen in the future. If it’s not easy and/or possible...... it won’t.
The debates get unnecessarily deep sometimes. It’s all good fellas. It’s all opinions.
FAS - wants ideas and opinions. I’m sure they are capable of sorting them out. I’ve got to remember to unwatch this thread though. Lol
D

chris said:
i am speaking to that example. is that not allowed?
Click to expand...

But of course. You can even speak to my fetish for staring at empty preset slots even after factory presets and all my other patch needs are met.

PS - Assuming it doesn’t effect your life in the slightest I am still baffled why anyone gives a f*** about why other people want these slots.

DaAxeMan said:
But of course. You can even speak to my fetish for staring at empty preset slots even after factory presets and all my other patch needs are met.

PS - Assuming it doesn’t effect your life in the slightest I am still baffled why anyone gives a f*** about why other people want these slots.
Click to expand...

i'm on the Beta team. i guess you didn't read my earlier posts in this thread. it affects "my life." i'm not retyping what i said already.

Cliff decides ultimately on everything. if he can do it, great. but there are limits. there are wishes for more everything right now.

if all of these wish threads only had the first post and no discussion, i don't think as many wishes would be implemented. so consider that i'm actually trying to help.
D

Writing that answer was far more helpful than slamming the need for keeping factory presets which is a personal preference. Thank You.

DaAxeMan said:
Writing that answer was far more helpful than slamming the need for keeping factory presets which is a personal preference. Thank You.
Click to expand...

slamming? i'm presenting an alternative. i've helped customers for over 10 years with this Axe stuff.

the thing i do most with 1-on-1 consultations is have almost psychological talks discussing why someone is doing this or that, and it almost always ends up being for no real reason at all.

deleting the Factory Presets that someone truly doesn't use at all, ever, isn't "slamming" anything. it's an excellent suggestion.

if anyone wants to keep the Factory Presets, they are giving up almost 1/2 of the Preset storage. if they truly aren't ever using it, that seems like a waste, doesn't it?

i think the desire to keep the Factory Presets on the unit at all times comes from the fact that many other devices have permanent Factory Presets that can't be removed or adjusted at all. and honestly, people usually don't use many/any of those anyway. but because devices in the past "always had Factory Presets", they want all their future gear to have it as well.

i wonder what would happen if the Axe3 was sold without any Preset data on it at all? all 512 slots are "user slots" and you can add the Factory Presets on if you want. i truly think that would change the view of many people regarding the 512 slots. why give them up to presets we aren't using?

when i work with people on the Axe from a fresh starting point, the first thing i do is have them move the Factory Banks up so Preset 1-128 are blank. this immediately gives them an "aha moment" compared to starting their presets on #385 or whatever. suddenly everything seems easier since it starts on number 1. i believe this approach was even considered briefly when the Beta Team was painstakingly creating and editing the Factory Presets before release. but it was agreed that to ship a device with a blank sound when turned on would be confusing to most people.

i love the Factory Presets. i and others here spent a very, very large amount of time working with them. but if you don't use them, you're allowed to delete them and give more space to things you do use. and if you want to keep them, then keep them, knowing that you're using up space.

it's pretty straightforward and non-emotional.

more preset slots would be great, but i think many would agree not at the cost of losing features in the future. didn't we see that exactly with the Axe-Fx II at some point?
D

I understand and appreciate that. I just wanted to know the technical cost of getting more presets. I naively assumed it was minimal given Axe FX 3 memory and hard drive space is jacked. Now I know and knowing is half the battle.

Guys, it is boring to hear your humble arguments for not having more presets. Really! 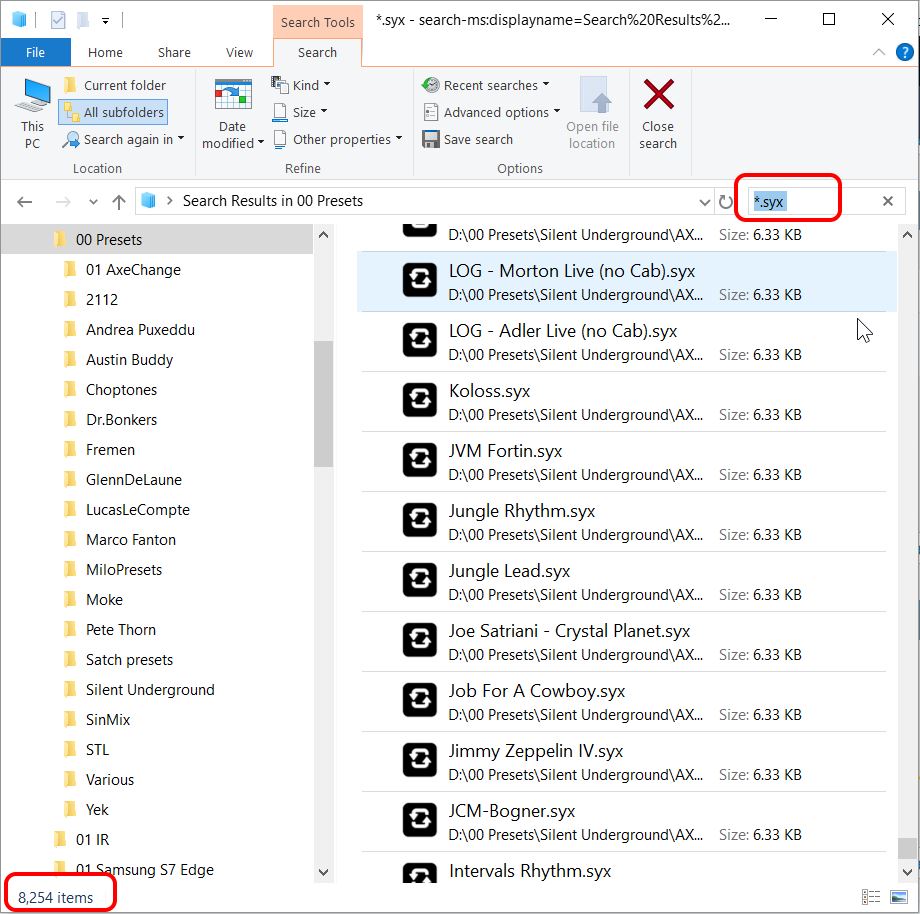 Piing said:
Guys, it is boring to hear your humble arguments for not having more presets. Really!

I just want 1 really big preset for everything.

I'd also love to have more presets.

If it were simply a question of adding more memory, I'd be happy to buy more memory sticks and plug them in.

Fractal Audio Systems
Moderator
The hardware is not capable of supporting more presets. I'm closing this thread because it's just senseless bickering.

Status
Not open for further replies.