Fractal Audio Systems
Moderator
Went to the show last night. All I can say is: he is the best guitar player on the planet.
Y

Cool. Was he using the Axe Fx II live?
A

No Axe-FX II live yet. Just a pedal board into a Laney amp. He said he was using that "because it was available" . Guthrie is still in the process of evaluating different monitoring solutions for live Axe-FX II use and he doesn't yet having a touring rig.

Here's a picture from the show.

Awesome picture. Would love to have been there. Really interested in what monitor solution he chooses. Thanks for the update!

FractalAudio said:
Went to the show last night. All I can say is: he is the best guitar player on the planet.
Click to expand...

The total command he has over his instrument is mind boggling.
A

I saw him last year at a clinic in Queens. It was a small intimate thing for Suhr, and I was 15 feet away, and my brain just couldn't understand how his hands could make those sounds out of a slab of wood. And he barely uses any gain! The feel is just as top shelf as his pyro-technics. Not fair.
H

One of the all time great players, imho. Incredible technique that's as flawless as a concert violinist, but he doesn't just play covers like them. Great improviser and musician.

I am surprised nobody (that I know of) has commented on GG's resemblance to early 70's Ian Anderson. 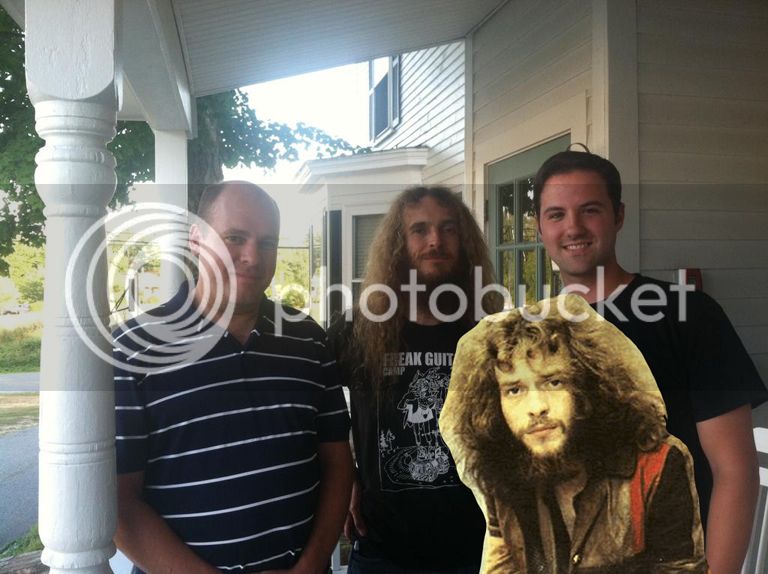 
cobbler said:
I am surprised nobody (that I know of) has commented on GG's resemblance to early 70's Ian Anderson.
Click to expand...

Wow, the resemblance is remarkable and kudos to GG for wearing that shirt.
A

I've now seen Guthrie in person on 3 occasions over the past year and on 2 of them he was wearing that shirt. We'll have to get him some Fractal attire to fill out his wardrobe .

NOTE: I posted this in another Fractal sub-forum, (Preset Exchange) but I figured it would apply well here too!

As a HUGE fan of Guthrie Govan for the past 4-to-5 years, I've seen him live three (3) times and listened to his Erotic Cakes LP and his more recent Aristocrats fusion-trio LP (with Bryan Beller and Marco Minneman) over & over, and I've transcribed a couple of his tunes & solos (BTW, NO I CANNOT play them up-to-tempo - LOL!) and I can never get enough of Guthrie's playing and music! Guthrie may occasionally remind listeners of Steve Vai (when he plays over Lydian Tonality especially - LOL!) or Shawn Lane (musical note-density,) or Steve Morse (staccato alternate-picking with brilliant use of chromaticism,) or Brett Garsed (killer hybrid-legato,) or Derek Trucks (killer bottleneck/slide-guitar!) or even Jeff Beck (with his AMAZING ability to uniquely phrase a single note or just a few notes in a very vocal-like inflective way through outrageous whammy-bar control or just amazing finger string-bending techniques!) That all said, at the end of the day, the more one listens to Guthrie Govan, the more you realize that he has develped an incredibly diverse and phenomenally skilled & articulate "voice-of-his-own," and his "cheeky" Brit-humor, incredible "ears" (as evidenced in his unfathomable improvisational-skills!) and extremely high intellect ALL come out (in droves!) in his music/playing.

Now that y'all know EXACTLY what I think of Guthrie Govan, I will also attest that he is very old-school - as evidenced by the minimalist-rigs he used when I saw him live - Cornford half-stack with a couple of pedals the first two (2) times I saw him at The Middle East Club in Cambridge, Massachusetts - U.S.A. in 2009 & 2010, then a Suhr Badger-30 with a 2x12 cab and a few pedals when I saw The Aristocrats show in September of 2011 at The Berklee College Of Music Peformance Center in Boston, MA - U.S.A. FWIW, I thought his tone was much better with the Suhr Badger-30 amp at Berklee, but then again Berlee's Performance Center sounds way better than The Middle East Club, so that could be an unfair "apples-to-oranges" comparison - LOL! BTW, Guthrie rides his volume-knob incessantly whilst playing (very dynamic!) and NEVER uses any sort of amp channel-switching. He (usually) uses traditional single-channel EL34 type-amps, and his idea of achieving his go-to five different sounds (with an infinite number of subtle variations in-between each of these tones) while performing is shown below (again - all utilizing one single-channel amp):

NOTE: I cannot stress enough how little gain Guthrie uses (in general) compared to his shred-instrumental contemporaries (I.E: Vai, Satch, even Eric Johnson, who use less gain than Satch & Vai!) Govan is the only player I have ever seen with enough confidence, musicality, and "balls" to go into full-shred with his barely-edgy /"guitar-volume on 3" sound! He is truly "one-of-a-kind!" - LOL!

*NOTE: Sometimes if Guthrie's hands are tied-up, (playing) he'll use a volume-pedal instead of his guitar's volume-knob.

That's it folks! So to hear that Guthrie is just taking a few solid-prests on the Axe-FX II and just disabling the reverb & delay as well as boosting the treble a bit in the amp-block is actuallly not surprising to me! I've always thought that Guthrie likes his tones generally "brighter" than most! I will say that his tone with the Suhr Badger-30 at Berklee Performance Center in Boston, MA - playing with The Aristocrats in 2011, was less "spikey" in the high-end/treble than I remember his Cornford rig when he was playing with The Jon Finn Group at The Middle East Club in Cambridge, MA in 2009 & 2010...but then again, the differing rooms could've influenced those perceptions!

I just think it's incredibly exciting that a player of Guthrie's caliber, who (up until using/trying the Fracatal Audio Systems Axe-FX II) was (probably) a self-confessed "tube-snob!" This is just yet ANOTHER example of a great-player lending "street-cred" to the Axe-FX II as a great guitar-tool as far as I'm concerned. This will probably eventually translate to added (and much-deserved) business sales for "Team-Fractal," so good for them!

Congrats to Fractal Audio Systems!...You now have the blessing of one of the world's greatest (albeit, not as well-known as some) electric guitarists in Guthrie Govan!

cobbler said:
I am surprised nobody (that I know of) has commented on GG's resemblance to early 70's Ian Anderson.

He is at the top of the guitar food-chain for sure; love his playing, tone, expression, phrasing, and overall musicality...great player.