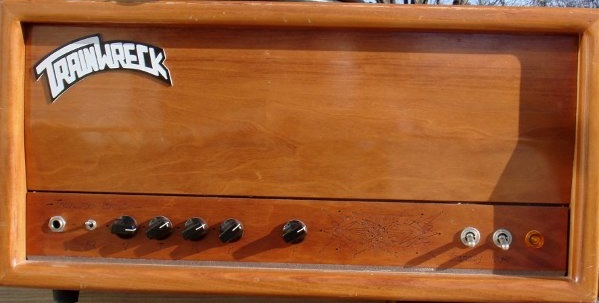 Wrecker Rocket: based on Trainwreck Rocket

Trainwreck Circuits amps are the most expensive guitar amplifiers, after Dumble. These boutique amps (heads only) with their remarkable wooden enclosures were designed by (the late) Ken Fischer. More about Ken Fischer.

The model is based on the Trainwreck Rocket. Only a few Rockets exist. Some say that it's the best-sounding Trainwreck amp ever made. Go here for more Trainwreck info and discussion.

Cliff owns a Trainwreck. AFAIK the exact model is unknown.

Powered by EL84 tubes, the Trainwreck Rocket is based on and sounds like a Vox AC-30 Top Boost with a rectifier.

"While all Trainwreck models are quite rare, the Rocket is by far the rarest with only about 8 ever made. The Rocket was the 3rd and last official Trainwreck model built by Ken and his increasing illness prevented him from building very many. This is a real shame because she is truly the finest, most magical sounding British style EL84 amp ever made. The clean tones are rich and gorgeous with a crystal airiness enveloping the chime that no other EL84 amp possesses. The overdrive is warm and creamy with singing sustain and magnificent harmonic complexity. Ken often referred to his personal Rocket amp as Reality Check because once you played her all the other great amps sounded less special. "Marcy" sets the tonal benchmark and is deservedly one of the most valuable guitar amps in the world.

Trainwrecks are very responsive amps with rich harmonic complexity and beautifully balance tone. The amp’s gorgeous clean and benchmark overdrive tones can be controlled with the guitar’s volume control or by merely altering your touch. Trainwrecks set the standard for warmth, fullness, responsiveness, note articulation, touch sensitivity, string to string separation, fret board feel, clarity, dynamics and singing sustain. Most people feel a Trainwreck Rocket is the finest sounding, tube rectified British style EL84 amp ever built and finding one has become next to impossible."​
We also have a Ruby Rocket model, which is also based on the Trainwreck Rocket. The models sound different though, and need different tone settings.

The Rocket is a simple amp: Volume (model: Input Drive), Bass, Treble, Cut (model: Hi Cut). Cut is a passive tone control in the output stage of the amplifier, to adjust the contour of treble frequencies. Because there’s no Master the Volume control not only sets the volume level but gain as well.

Note that the model is quite bass-heavy, I have to turn Bass down. But other than that, I can pretty much leave all controls at default.

I prefer to use the model with IRs of G12M (greenback) speakers, just like old Vox amps.

I have been using the Wrecker Express, but I had never tried the Rocket. So many killer amp models, so little time...

I have been using the Wrecker Express, but I had never tried the Rocket. So many killer amp models, so little time...
Click to expand...

Me too. I always stuck to the Express but I may like the Rocket the most of the three Wrecker models. Everything at default, except for less Bass and a little Hi Cut, and stock cab 54.

Thanks Yek-yet again............
I always thought this was a great video also for a trainwreck and nice playing - all volume knob
Hope I was allowed to post this in this thread. If not sorry

Whoops - sorry about that. I saw the wrecker vs express comparison. Thought it was just the Trainwrecks all together............I can delete it if need be to keep the thread straight.

Stratman68 said:
Whoops - sorry about that. I saw the wrecker vs express comparison. Thought it was just the Trainwrecks all together............I can delete it if need be to keep the thread straight.
Click to expand...

Damnit Stratman68!!!
Thats why we can't have nice things. I enjoyed the video anyway.
And of course A BIG shoutout to Yek for these great amp threads.

Vendor
I recently discovered that if you dial back the input gain on the model a little bit from default, one can get some stunning Vox-like bass amp tones with this model. Increase gain, mv, crunch, and amp sag to move into that 70's live rock album distorted bass vibe.

I liked this demo.

Rocket is a sweet amp!

Tex Axe said:
Question .... Cliff would you consider including control over every tube in preamp including Phase Inverter ?
Not only that is it now possible with this technology that we can now tone match actual tubes themselves ie mullards bugle boy phillips rca siemens ect Because Because Because Because it would be kinda fun to cherry pick through 90-600 dollar preamp tubes and never worry about them burning out or going away...... Since you included V1 V2 would I be insane to ask for the phase inverter to be added or for that matter the entire preamp section... I think it would be great to be able to cherry pick our tube compliment it would also be quite nice to be able to input voltages there..

Thank you for including V1 V2 and I bet your saying sheesh just more more more but the method to my madness is I want to mess with the voltages throughout the entire preamp section and the phase inverter.. Since power tubes are not so important as the preamp tubes for tone sculpting I felt the extra detail to attention on those tubes even tone matching the best in the world might be a worthy idea. getting the values and readings from said brands and perhaps listing an option to cherry pick which tubes we want in the preamp section..Once we put those in place it would be splendid if in fact we could tune specific locations of those to produce well Blooms... having input control over each tube and say over which style goes there would be just the cats meow.

Granted it would be advanced settings and no mans land for some I cant see how anyone could mess things up its virtual where as in the real world things would be on fire.. But I could see how one could fine tune any amp too their own specific guitar....
And thats how.... btw im not bitching or complaining about anything I just learned something this week and found a possible reason why my tube amps were not passing signal so I think I found that issue and I was told something about Trainwreck amps and it deals with how they were tuned to get the bloom..


I was curious if its possible to have that ability added into axe fx control over voltages of each tube slot v1-v6 specific to amp called,
and if it was possible to actually tone match tubes themselves pre amp tubes specifically...
at 90 dollars per tube up to 600 for preamp tubes that could get costly to retube amps every 3 months but we dont worry about such things..

Is this possible to Tone match actual tubes by brand ?
I know its possible to include a box to input numbers manually for voltages so adding v3 and v4 or Phase Inverter with that ability
should be possible..

I dont know so I ask and you bet I have a method to my madness for asking..

Im about to tune several amps in a row in the physical realm if I get sound that is..
I have voltages and the schematics drawn by hand just no sound...

DOH found the issue tonight with that I think..

These builders are real clever they hide things right in front of your face where you cant see them no matter how close you can look at them and part of that magic is in the way things are tuned voltage wise..

So id love to see something like this happen...

3) probably ought to put it in the "wish" subforum.

ezvictor said:
Damnit Stratman68!!!
Thats why we can't have nice things. I enjoyed the video anyway.
And of course A BIG shoutout to Yek for these great amp threads.
Click to expand...

Not sure I get the "Thats why we can't have nice things" part but glad you enjoyed the video. I actually posted this video many years ago also. All versions of the wrecker-since the beginning have always been in my top 3 amps in the axe.. Standard to now

Anyone guess the Mystery circuit yet or how to tune it...... ?

I've loved the Trainwreck Express for a long while now. Hadn't yet tried the Rocket, other than the factory preset. Set one up tonight. Daaaaammmnnn...this amp is incredible. Certainly can give a Vox AC30 some serious competition. I can't wait to record with this amp panned left and the Vox panned right. Between the Vox, the Rocket, and a Matchless Chieftain, I've got all the edge-of-breakup amps I could ever hope for. There are other great amps in this style that the AxeFx offers, but those three are the holy trinity for me right now.

Moderator
I have no idea Tex

Moderator
I like the sound of this model...by itself...but it really seems to get lost in a mix.

electronpirate said:
I like the sound of this model...by itself...but it really seems to get lost in a mix.
Click to expand...

To my ears right off the bat it has a lot less mids than the Express.. Maybe that's why?
D

I don't know what I'm doing wrong with this amp, but I cannot bond with it. I just do not like the sound of it, even with its legendary status, just not my sound, I guess.

I found the amp rather weak, compared to other similar amps, until I turned cathode follower compression (CF Comp on the preamp page) to about 70%.
It's strangely set to 0% per default, as the Rocket designs to my understanding have a cathode follower, other than an Express or Liverpool.
The Ruby Rocket has the same issue...
You must log in or register to reply here.
Share:
Facebook Twitter Reddit Pinterest Email Link
Top Bottom