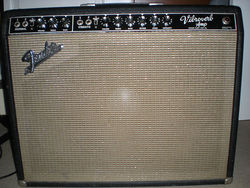 The Vibroverb is possibly the most sought-after vintage Fender amp. Mainly because Stevie Ray Vaughan (SRV) used to play two of them. The picture above is Cliff's own original ’64 Vibroverb. Mark Knopfler played a ’63 brownface model.


Fenderguru.com:
"Stevie Ray Vaughan’s musical influence has made the Fender Vibroverb the most sought after and hyped of all Fender amps. He played many other amps too, Super Reverb, Dumble and Marshalls. In studio he used dozens of amps that were thrown at him. For some reason the Vibroverb has become the most famous and is now widely associated with his signature tone (though you can reproduce his tone with most Fender amps with the right speakers). On the vintage amp market the blackface Vibroverb sells for three to four times as much as the price for other 6L6 Fender amps, sometimes even more than the legendary 4×10″ narrow panel tweed Bassman. Since Fender did not continue the Vibroverb after the CBS takeover in 1965, most likely because players didn’t desire 1×15″ amps at that time, there are only a few blackface Vibroverb amps out there. Given the hype and popularity, these few Vibroverbs are extremely valuable and collectible. So, what is so special with the Vibroverb? First, the 15″ speaker sets it apart from most guitar amps. While most guitar amps have multiple 10″ and 12″ speakers the Vibroverb came with one big Jensen C15n or JBLd130f, the last one with a aluminium dust cap that can be hard to tame. Otherwise the blackface Vibroverb is very similar to the other blackface and silverface AB763 Fender amps. In fact, there aren't any different features or technical improvements in the Vibroverb that justifies its popularity. It’s all about emotions. But that’s what music is all about; emotions.
The Vibroverb belongs to the 6L6 Fender family. It is powerful and loud, but in a different way than the 10″ and 12″-amps. The Vibroverb did not sell very well in 64 and 65. Players probably thought the amp was suited for bass amps, we’re not sure. The Vibroverb did score among steel guitar players at the time. The 15″ speakers are firm in the bass and have lots of sparkle but most importantly, they have an enormous spread carrying the lower mids to anyone on stage. Mid frequencies is exactly what you need on stage in an electrical band. The mids will blend in nicely with the bass, drums, piano and horns. It will not interfere with the bass like a 4×10″ setup does. Of course this is a matter of taste, but a guitar tone with strong mids will contribute to a rich overall melodic footprint in an electrical band."​
Wikipedia:
“The Fender Vibroverb was a 40-watt combo guitar amplifier originally manufactured in 1963 and 1964. It was the first Fender amplifier to incorporate on-board reverb which became a standard feature on many high-end Fender tube amps during the 1960s and 1970s.

(Blackface era) The Vibroverb, likewise, was given the new blackface cosmetics and somewhat different circuitry (AA763). Still rated at 40 watts, the new design possessed the new blackface "optical coupler" vibrato circuit (in place of the tweed-style vibrato found in its immediate predecessor), and a bright switch. Gone also were the two ten-inch Oxford speakers; in their place was a single fifteen-inch speaker. Both JBL and Jensen speakers were used, depending what was on hand at the time of production.
Production on the blackface Vibroverb was discontinued in late 1964.
Due to low production numbers and their use by Stevie Ray Vaughan, 1964 (blackface) Vibroverbs have become highly collectable. Vaughan acquired two 1964 blackface Vibroverbs in the late 1970s or early 1980s at two different times and locations, with sequential serial numbers. The Vibroverbs used by Vaughan were also modified by Cesar Diaz in a number of ways.“​
The blackface Vibroverb has 6L6 power tubes, low and high inputs, and a Normal and a Bright channel (model: Bright channels). It has Volume, Bass and Treble controls and a Bright switch, plus reverb and vibrato controls.


Fractal Audio models are always based on the input with the highest input level. To get the equivalent of using the lower input, set Input Trim to 0.500.​
The range of most Fender models is 1 to 10, while the model controls range from 0 to 10. For the OCD-crowd, here's a translation table, created by forum member Barhrecords.​
We have 4 models of various Vibroverb amps:
About the Custom re-issue: Fender produced a Vibroverb Custom re-issue, in collaboration with Cesar Diaz, between 2003 and 2008. This was a modified version of the SRV’s blackface Vibroverb. It was switchable between tube (original) and solid-state (diode) rectification, and the Normal channel and Vibrato effect could be disabled for more preamp gain.


Cliff:
"The Transformer Matching value for the CS model is based on the output transformer in the actual amp. Legend has it that SRV used a Bassman transformer which would lead to significant overmatching. To replicate this increase Xfrmr Match to around 1.8.​
Blackface Vibroverbs and re-issues were paired to a 15" speaker (Jensen C15N, JBL D130 or Eminence.

I like to select the AA model, dial back bass a little, add a some treble, turn up Input Drive beyond 6, use the 1x12 Empire stock cab, and you're done: a kick-ass crunchy Fender sound.

Tyler Grund's video was what really drove me to mess with this amp. One of my favorites for a clean or slightly driven sound.