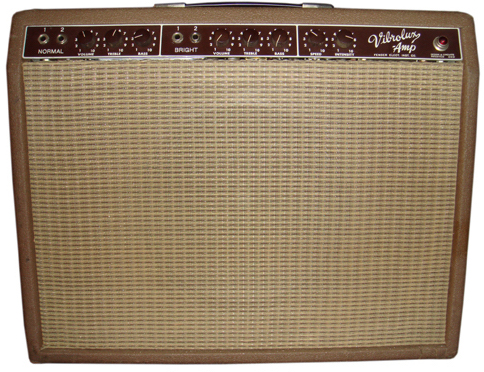 This model is based on a rare brownface Fender Vibrolux (not the Vibrolux Reverb), which were produced between 1961 and 1963 only.


Fractal Audio models are always based on the input with the highest input level. To get the equivalent of using the lower input, set Input Trim to 0.500.​
The controls on the Bright channel are: Volume, Bass and Treble, plus vibrato controls. There's no Bright switch.


Note that the range of most Fender models is 1 to 10, while the model controls range from 0 to 10. For the OCD-crowd, here's a translation table, created by forum member Barhrecords.​
I turn down Bass a little, increase Treble a little and that's it: a great vintage Fender tone.

For those Knopfler fans out there, here are some small clips of him playing through his Vibrolux:
I guess we all have our favourite 'private moments' with the Axe. Mine is playing a bit of Sultans through the Vibrolux

I'm surprised there's not more love out there for this amp - it's my 'go to' on the Axe. I think it sounds great with the input trim cranked as well as for cleaner stuff.

Jon Fogerty, of whom I am a massive fan, used these on many of the CCR studio recordings. He played a Les Paul which is maybe why I need to crank the input trim to get in the same ballpark with my Tele.
A

Guys why I'm not getting the same distortion from this amp like some video I watched? Namely this one

I have mimicked all the settings but on the axe fx it's a ton cleaner...
EDIT: I'm able to reacreate similar tone with input trim at 5.
Last edited: Feb 20, 2018

alphahot1 said:
Guys why I'm not getting the same distortion from this amp like some video I watched? Namely this one

I have mimicked all the settings but on the axe fx it's a ton cleaner...
EDIT: I'm able to reacreate similar tone with input trim at 5.
Click to expand...

Might be just higher output pickups, he got there.
Also, he is using a Tube screamer, according to the website (Did you add a tube screamer?).

Also, not sure if that's relevant here, but do note that the Master volume in the axe is not exactly the same as on real amps....
Last edited by a moderator: Feb 20, 2018
A

Thanks, that's what I though, but the tubescreamer is engaged later in the video (btw he has crazy settings, everything is on 10 but the level on 3). On the axe the master volume is already on 10. But you have a point here, I rised my pickups, I have splitted humbucker, probably I have less output. I actually found a great tone this way! Drive on 7, input trim still on 4...
Maybe you are you saying that I could increase the master volume trim? I'll try that!
Last edited: Feb 21, 2018

alphahot1 said:
Maybe you are you saying that I could increase the master volume trim? I'll try that!
Click to expand...

What I'm saying is, that I've read somewhere that many amp master pots are so: They get really loud at low settings, but don't go that much louder when you go crank them up. That might be so to give you an impression that it's a really loud amp.
The master knob on the axe is coded to be perceived as linear.
So, a 3 on the amp might be the same as like 6 on the Axe FX or something like that...
Though I might be completely wrong. I'll research it.
Last edited by a moderator: Feb 21, 2018
You must log in or register to reply here.
Share:
Facebook Twitter Reddit Pinterest Email Share Link
Top Bottom