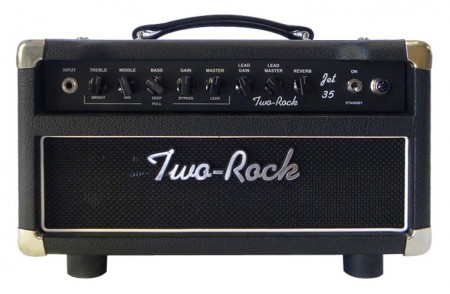 Two-Rock is most famous for being the manufacturer of amps used by John Mayer. Their Jet 35 is a D(umble)-style amp.


"A peerless small venue or studio amp, specifically designed to deliver killer Two-Rock tone at a lower volume than any other series in the line. It can produce 22W through 2 6v6's or 35W through 2 6L6's. The Jet 22 and 35 have a Custom Reverb-type circuit but are more basic in their features. The Jet does not include the EQ1/EQ2 switch and has a simpler feature layout than the CR V3. It offers the basic EQ settings - bass, mid & treble - and it is closer to the EQ2 or the CR Sig in voicing. Same serial effects loop as the Custom Reverb, and same all-tube spring reverb. The Jet 35 has a pull bright, mid and deep boost, as well as the bypass and lead switches available by a "pull" pot on the front of the amp."​
Cliff’s comments:


"It's very smooth but there's this unique chirp or something that I've never heard in an amp before. When you hit the note there's this blast of high end that rapidly decays so it has an almost vocal quality. The frequency shaping is very different than most other amps."​
"The Two Rock is the most unique amp I've ever modeled. Almost like a violin but with this really cool chirp on the pick attack."​
The Jet 35 is a 35 watts head with 6L6 power tubes. It has a single input and two channels: clean and lead.

We’ve got two models of the Jet 35, both covering its Lead mode. “1” is based on the amp with Bypass engaged, which cuts the EQ section out of the signal path, allowing more input signal to hit the gain stage. In the “2” model the Bypass is off.


Even though the J35 model is supposed to be a D-style amp model, I've used it successfully for rock leads. It cuts through the mix nicely and it's easy to generate musical feedback.​
Two-Rocks cabinets are usually equipped with G12-65 speakers. These are not represented well in the stocks cabs, but you can use stock cab #020, which is an IR of Two-Rock TR-1265 speakers (similar to G12-65) in a Fender Tweed Twin cabinet.

No love for the Two Rock?
This is a great amp. The JS2 model is fantastic for that volume controlled edge of breakup and this is an easy amp to dial in. It's got a great lively feel and tone.

Buddy's Botique Cab Pack has great IR's for this amp with both a Two Rock cab and a Bludo Cab with 65's.

The Two-Rock has a nice, wide range of control via the guitar's volume knob. You can pull a lot of stuff out of a single preset.

gave em both a quick shootout, loving the model with the tone stack bypassed. both sound great but the thickness from the direct signal is super nice to smash chords out on with the bridge pup on my tele

I had a Jet 22, really loved the amp for it's tones, but it requres some volume to shine. Much more than my Duende or Astroverb. So I had to let it go. This problem has been solved with the AxeFx, great sound even with headphones, the Jet is one of my all time favourites!