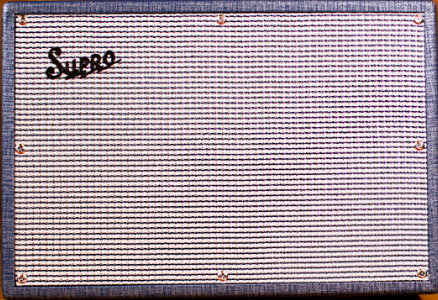 Supro is a legendary amp manufacturer. Supposedly Jimmy Page used the Supro 1964T (with a single 12”) to record a couple of Zep albums. Supro was bought by Valco, that’s why you sometimes see the old amps mentioned as “Valco” instead of Supro. In 2013 the Supro brand was brought back to life by Absara Audio. Users of the current models: Snarky Puppy, JD Simo, Steve Stevens.


“The legendary Supro logo with signature lightning bolt stirs several images simultaneously for most guitarists. Sum these up as unique looks, individual tone, and a near-mythic cool factor that is unmatched in the world of vintage tube guitar amplifiers; but the most common reactions to all of these sensations are best rendered simply as, “I want one!” Jimi Hendrix, Jimmy Page, Albert Lee and countless other stars wanted one too—and got ’em, using Supro amps to lay down the foundations of blues and rock. But the roots of the Supro brand go way back to a time well before the period for which we best know them now, to the very birth of the electric guitar.​
Supro’s origins date to the pre-electric guitar days and the formation of the National Resophonic guitar company around 1926, with roots in the resonator guitars that became a blues tone standard prior to amplification. National and Dobro merged in the early ’30s to form Valco, and Supro. Soon, Valco-made Supro amps were tearing it up on Chicago’s south-side scene, establishing a tone that has been synonymous with gritty blues ever since. By the mid 60’s, Jimi Hendrix was playing a Supro Thunderbolt amp on tour with Little Richard and the Isley Brothers. A few years later, Jimmy Page, inspired by the raw tones of the Chicago blues scene, cut seminal Led Zeppelin tracks on a Supro Model 24… and so the chain of influence goes, full circle from Chicago blues, to London blues-rock, with Supro the hip tone to beat.​
Player upon player has since discovered the sonic splendor of Supro’s extremely original circuits and unique build style, as well as the surprising versatility hidden within the appealing simplicity of these amps. Plug into one of these beauties, and you know you are striding out onto original and inspiring sonic ground. There’s a girth, depth, and dimension to the tone of these old circuits that is simply unattainable from the other brands, and a dynamic playing feel that definitely puts a smile on my face every time. Keep them clean, and they are sweet and rich; crank them up, and even the smaller Supro models issue a bold, furious roar that retains its edge and cutting power amid heavy overdrive.​
From authentic Chicago blues to all-out rock’n’roll, the Supro brand has distinguished itself as a sound for players who want to make their own mark on music, rather than merely chasing some tired standard that has gone before. Players who know Supro amps and understand what they can do have always appreciated them for their ability to help you sound like you. Supro has always presented a great alternative way to get your music made, and to get it noticed. For years, the only way to achieve that legendary Supro tone was to track down an original amp, get it running well, and hope it stayed that way. Not any more. Supro is back—and the lore, the legend, the tone, and the total attitude is back with it. Check out Supro’s growing lineup of American-made amplifiers that honor the original circuits, while presenting value and performance unparalleled in today’s market, and a tone that is truly all your own.”​
We’ve got a model of the 1964T Dual-Tone, Supro’s flagship amp. The "T" stands for tremolo.


"The “Dual-Tone” 1×12 combo amplifier is the undeniable rock star of the mid 60’s Supro amplifier lineup. Vintage 1624T amps have been sought-after for decades because they embody the most desirable aspects of the Supro sound. As the Dual-Tone’s volume knob is turned beyond noon, a fat and compressed clean tone evolves into an immediately recognizable grind that remains articulate and listenable even when turned up to full blast.​
This 24-Watt, 1×12 tube combo can easily be driven to glorious saturation at a manageable gigging volume while retaining exceptional clarity and bandwidth, at any level of gain. This amp’s unique mojo is largely defined by the use of 6973 power tubes in the amplifier’s output stage. These robust 9-pin tubes were employed extensively in the mid- and low-power Supro amps made 50 years ago. 6973 tubes look like EL84s but they deliver a distinctly American voice that has been missing from the world of tube amplifiers for far too long.​
The Dual-Tone’s linkable channels each sport volume and tone controls as well as a shared tremolo circuit. Plugging into IN 1+2 links both preamp channels in parallel for double the input signal and double the gain. This clever topology lets you hit the power amp as hard as necessary and even allows “channel switching” in its purest form, using a simple A/B switch.​
The 1964 reissue Supro Dual-Tone’s vintage-correct, lightweight cabinet—combined with our breathtaking custom 12” Supro speaker—kicks out surprisingly plump low end with all the detailed midrange and high end articulation that defines the Supro tone players have been chasing for decades. Loud enough to gig with a band, yet easy to haul around town, the Supro Dual-Tone is the perfect small club and recording amplifier."​
It has two channels, which AFAIK are identical. On the real amp the channels can be linked for more gain.

Old and current versions of the 1964T offer just a Volume and Tone control on each channel, plus shared tremolo controls. The tone control is mapped to Treble in the model.


I love this model. It’s vintage and simple. Has lots of mids. Sounds edgy and dirty, recognizable and has its own character. I could -easily- do an entire gig with just this model.​
Review of the current model in Guitar World.

The speakers in Supro amps range from very small to very large. We’ve got a couple of them (6", 12", 15") in the stock cab collection.

The Supro website refers to the amp as 1624T (at least the reissued version), and if I google 'Supro 1964T' the only reference I can find is to this forum

To get the channel linked sound is that parallel or series?

I suspect I'll soon be going down a rabbit hole of Snarky Puppy offshoot recordings soon. That Lenburu track kills! I just discovered the Mark Lettieri album last week and totally dig it!

I love this amp. Is this amp G3'ed? Does G3 matter after Quantum? Is it quantum-ized?
L

Using the stock 6x9 IR in the Cab block with R121 mic sim. Crank the drive and treble to 10 with my Telecaster and it's great.

BillyZeppa said:
I love this amp. Is this amp G3'ed? Does G3 matter after Quantum? Is it quantum-ized?
Click to expand...

G3 is a dead horse

Edit: checked the stock cabs, im a doofus, carry on! (the settings do sound great on my tele as well though!)

Thanks Yek. Do you have a Supero preset for us?

Knuckles said:
Yek, do you sleep?
Click to expand...

I must say, I never listened to any legendary recording done with supro, I just heard about it. I tried the model after this review, and I must say I think I just found a new favorite - it does have a character I don't hear in other amps.

Thanks Yek. Way cool of you to do this.

Gytaxor said:
I must say, I never listened to any legendary recording done with supro, I just heard about it. I tried the model after this review, and I must say I think I just found a new favorite - it does have a character I don't hear in other amps.

Thanks Yek. Way cool of you to do this.

This song is all Supro and Telecasters.

Having no prior experience with this model, I decided to give it a spin.

I loaded it into my preset template, reset the block to default and made a couple minor tweaks: input drive to 8 and Treble to 7.5.

I found it to sound very balanced with the IBZUSA humbucker in the bridge position of my 1988 Ibanez s540 Pro.