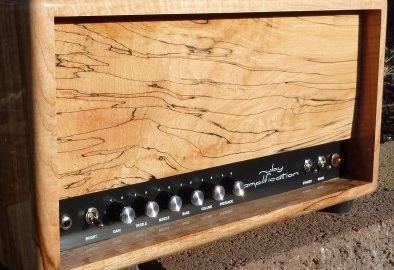 Trainwreck Circuits amps are the most expensive and sough-after guitar amplifiers, after Dumble. These boutique amps with their remarkable wooden enclosures were designed by (the late) Ken Fischer.

Paul Ruby hand-builds amplifiers which resemble these Trainwreck amps. He is – in his own words - an amp hobbiest, a weekend warrior. He builds just a smal number of amps each year.

"The Ruby Rocket is not the same as an actual Trainwreck Rocket. There are topology differences and the amps don't sound the same."​
Powered by EL84 tubes, the Trainwreck Rocket and Ruby Rocket sound like a Vox AC-30 Top Boost. And like the Morgan and Matchless amps, may people think that the Ruby is a “better” version of that British amp.

The Ruby Rocket is a simple amp: Volume (model: Input Drive), Bass, Treble, Cut (model: Hi Cut). Unlike the Trainwreck Rocket, there’s also a Bright switch which adds gain.
Because there’s no Master the Volume control not only sets the volume level but gain as well.

We have two models, one with Bright engaged, and one without.


I especially like the slightly overdriven tone of the models. Volume around 3.50, Bass at 3.50, Treble around 6.50 and Hi Cut up to 5 (applies to both models).​
I prefer to use the model with IRs of G12M (greenback) speakers, just like old Vox amps. The amp is bright enough by itself, no AlNiCo needed.

I didn't find online videos of the Ruby Rocket that represent the amp well, yet.
Last edited: Aug 14, 2016

I really like this amp a lot, along with the Rocket. Both are great flavors of a gainy, responsive, breathing Voxy amp. I agree with Yek- it's a bright amp for sure. It matches better with my Tweedy SG than with my strat, but it's really a well balanced, responsive amp. It shows every mistake I make with it (and there are plenty of them), but man, do my better moments sound good on this thing.
You must log in or register to reply here.
Share:
Facebook Twitter Reddit Pinterest Email Share Link
Top Bottom