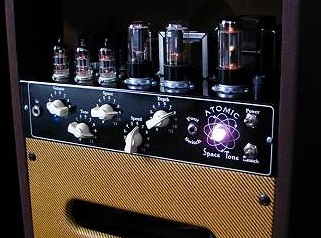 The amp has a wonderful bias-regulated tube tremolo and tube reverb. Other controls are Volume and Tone. Tone is mapped to Treble in the model.


“In just a handful of years, the Swart Atomic Space Tone has received some of the most glowing raves of ANY amplifier in recent memory.   This amplifier has 20w of twin 6V6 power in high Class A biased AB and brings some of the most soulful, rich, near three-dimensional tone you have ever heard. This has to be one of the most expressive amplifiers made to our knowledge, and we've tried more than a few. TUBE REVERB and TUBE TREMOLO, something virtually nonexistent in today's marketplace, is just part of the picture. Includes a 12" Custom British Vintage Series BV-25m that screams TONE with body and soul; This amp has excellent breakup (wait till you hear the samples). This all new circuit is housed in a lacquered TWEED pine cab with dark Tweed panels. This amp is in its own league.​
The idea of the Atomic Space Tone hit me when I was working on a vintage Gibson Scout guitar amp. It had Reverb, Tremolo, and 15 watts of pure rocking vintage tone power but only three preamp tubes and two EL-84 output tubes. I thought to my self - I have never seen an amp that could do so much with so little and sound surprisingly good. But I knew it could be even better. I knew something could be built revolving around my favorite little tone generator, the 6V6. I sent a note of thanks to my cohort for the inspiration for one of the best amplifiers I have ever built and the only thing I have found to equal the soul and amazing tone of the ST-6V6se but with MORE power.​
I call it the ATOMIC SPACE TONE. And damn if it's not a winner - this beast sounds amazing.​
This amp brings more tube soul than I thought possible, even compared to some of my favorite vintage amps. We are talking ALL TUBE circuitry, even the Tremolo and Reverb, all leading into the excellent 12" Mojotone BV-25m speaker.​
I am actually so excited by this amp both aurally and visually. It's the second in our Tweed Series which takes our excellent finger jointed pine cabinet and covers it with top quality tweed, adding a lacquer to give it durability and that vintage, timeless look. We then add a rich, dark lacuer tweed on the sides which gives this amp a totally distinctive appearance. When we play out with this beast, everyone that "knows" comes up to inquire about the AST, this on the sound AND looks. Just like the original ST-6V6se, there is nothing out there like it.​
The AC is cleaned and rectified by the reliable JJ 5AR4, this a very robust tube providing excellent sonics due to the total lack of solid-state circuits in the rectification stage (SS rectification leads to a more hard/harsh tone and slams the tubes on power-up causing excess tube wear). A heavy duty, JJ 500V Surface mount capacitor is the mains filtering device."​
The amp looks gorgeous too. This is an amp that fits right into your living room. 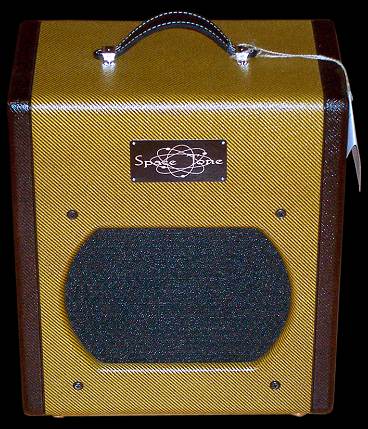 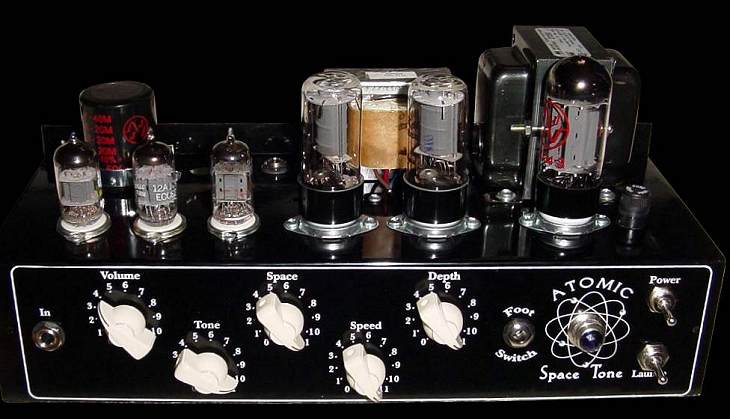 
"It's unique character comes from the PI. It's a cathodyne phase inverter so it doesn't drive the grids as hard."​
Reviews:


http://www.electric-guitar-review.com/2006/09/25/review-swarts-atomic-space-tone/​
http://www.guitarplayer.com/miscellaneous/1139/swart-atomic-space-tone/14652​
IMHO the Nuclear-Tone model (and the Gibtone Scout) is a real gem in the amp model collection. It combines characteristics of a Fender Tweed and a Vox. You’ll find yourself playing endless “solo” sessions and drifting away. Axe-Fx only: don’t forget to turn on that Tremolo in the AMP block (set Depth at 100%). I set Input Drive around 4.00 for a clean tone with body, and bump it up to around 7.00 for more drive. Treble is around 4.25.

my daily read from Yek has again opened my ears to yet another great amp that I will start using. I would have never choosen this amp as I'm still in the middle of getting my standard sound for home and gigs. but after listning to video 1, i have to include this amp

Absolutely love this model and the Scout both... those amps are just begging to hang some modulation effects and delay around them and play little roots-y inspired atmospheric soundtracks. If Ennio Morricone scored a jet age sci-fi film this amp would for sure be the center piece of the orchestra.

Lovely amp. I heard a real one a couple of weeks ago. It's round, fat, smooth, and pushy when it wants to be. The model in the Axe-Fx captures that beautifully.

Thank you yek! Always always appreciative of your amp posts.

As someone who missed the whole tube amp revolution and boutiques, these post are tremendously interesting and educational. More, it helps me really better understand the AXE FX! Keep it going bro ...

This is one of my all time favorite amps. I liked the amp model so much back in the Pre-Quantum days that I bought the AST's little brother, the Space Tone Reverb.

The STR is easily the most grab-n-go friendly amp I've ever used: it's barely over 10lbs, loud enough to annoy the neighbors, has a lot of tonal options for both single coils and humbuckers (the latter not getting much of a clean tone, obviously), and sounds brilliant. I also like the different tonal options I get from being able to run a 6L6, or a GZ34 instead of a 5Y3, etc. It also takes pedals really well; throwing a delay and a drive in front brings out even more possibilities.

One of my favorite amps.. the model in the Axe is one of my most used as well.

Thanks again Yek! This is a nice model. As Yek mentions, the tremolo is modeled in the Axe-Fx II which is great. On the AX8 you can add a Trem block after the amp block as is done on the built-in "Nuclear Tone Clean" preset that uses this model.

Wow - I would never have known about this amp, but boy is this nice. 45 minutes just blew by with this amp and my strat (just set volume and tone/treble, the standard cab IR, drive block with the Kl*n settings, Stereo Tape Delay, rotary and spring reverb). Extremely dynamic and touch sensitive and the notes just bloom.

I have no use for this sound in my gigging life, but it will be a new friend at home

Thanks again Yek! I also spent 30 mins that quickly turned into 90 mins last night noodling away on this one. I would never have tried it without this article prompting me. It sounds great.

I've swapped out a edge of break up Bassman patch from my live presets that I wasn't gelling with for one based on this amp. I'm looking forward to trying it. It seemed to work well with a number of different IRs too. I settled on a couple of the Vox ones from OH Justin York collection.

Keep up the good work Yek!
B

An undiscovered gem. Thank you so very much for these amp write ups. I'm not sure I would have bumped into this had you not done this Yek. Bravo!

This tone sits smack in the middle of my wheelhouse. I've promised myself not to buy another amp until I sell off some of the stack in my equipment room but dayum I could see myself buying this!!!

This model became one of my favorites the day it was released. I don't see it losing it's loftily position on my go to list anything soon.

Thanks for the write up Yek. You are the best!

I am surprised at the fact that AX8 Nuclear-tone model does not have the modeled Tremolo that AXe does, I was under the impression the the amp models were identical on both units? is this the only amp that varies from the Axe II ?
Last edited: Apr 20, 2016

thinking this might be my new go to clean instead of the jazz chorus or SF twin...just sounds so much more musical and pleasant to play through. the tremolo is really great too!

bradlake said:
I am surprised at the fact that AX8 Nuclear-tone model does not have the modeled Tremolo that AXe does, I was under the impression the the amp models were identical on both units? is this the only amp that varies from the Axe II ?
Click to expand...

. Does this have something to do with the way the SHARC chips are set up?

None of the Ax8 amp models have the tube tremolo I guess it is in order to make it fit within the limited CPU available.

Smittefar said:
None of the Ax8 amp models have the tube tremolo I guess it is in order to make it fit within the limited CPU available.
Click to expand...

Thanks for the clarification ...easy enough to stick a trem block between amp and cab, I guess....

Smittefar said:
None of the Ax8 amp models have the tube tremolo I guess it is in order to make it fit within the limited CPU available.
Click to expand...

It would be great to get a model of the tube tremolo in the tremolo block if there is no way to dial it in.

dr bonkers said:
It would be great to get a model of the tube tremolo in the tremolo block if there is no way to dial it in.
Click to expand...