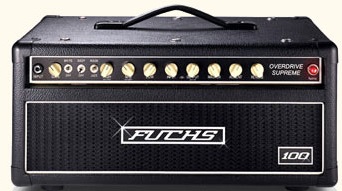 
A Dumble is THE most expensive amplifier available, no.1 on Vintage Guitar’s list of most valuable guitar amps.​
Famous Dumble players include Robben Ford, Larry Carlton, John Mayer, Carlos Santana, Keith Urban, SRV, Eric Johnson, Joe Bonamassa.​
There’s always a lot of talk on the forums about Robben Ford's Dumble tone. It’s an elusive tone, worshipped by a lot of jazz / blues / fusion players. It's a thick, mid-heavy, smooth lead tone, very touch-sensitive.​
Replicating an original Dumble amp is hard. The amp’s circuit often has goop all over it, hiding the electronics.​
Fuchs:


“The Overdrive Supreme excels at everything it does. From crystal clear and detailed clean sounds to its harmonically complex and articulate overdrive, the amp holds its sonic integrity at any volume level. If you've ever heard Larry Carlton or Robben Ford live, that's the tone! "The Overdrive Supreme nails the Dumble sound to a tee, and then some!" (20th Century Guitar).​
“The Overdrive Supreme has received glowing reviews in BOTH domestic and foreign publications. We recently received a very favorable review in Japan's "Guitar Magazine," as well as Guitar Player Magazine (February 2005). The Overdrive Supreme is available in power ranges from 20 through 150 watts. Available in heads or 112, 210 or 212 combos. A spacious Accutronics 3-spring long decay reverb pan is used for a natural warm, yet detailed reverb.​
The clean channel has brite and deep switches, as well as a rock/jazz switch, which changes the way the tone controls operate. Rock is a more aggressive and punchy bright tone, which jazz is lean and audiophile-like, being more balanced and smooth. There are passive high mid and low controls. The high control pulls for a mid boost, the mid control pulls for gain boost (which bypasses the tone controls). The clean channel acts as a preamp to the overdrive channel, and the tone controls and EQ switches are all active during overdrive use, including all boosts.​
The overdrive channel features separate OD in and OD out controls. OD-in sets the level of saturation in overdrive, while the OD out control sets the final balance between clean and dirty channels. There is a global master volume, master reverb and accent control, which adds presence and edge to the output stage.​
The entire audio signal path is fully tube (except reverb). The ODS features a regulated high voltage DC supply for lowest noise, consistent tone despite line voltage variations, and also features regulated DC preamp tube heaters for additional noise reduction. These techniques are used in the finest audiophile and tube studio equipment, and are unique to guitar amps.”​
Cliff:


"Supposedly a Dumble ODS clone but our reference amp has way more gain than our Dumble."​
And indeed: of all D-style amp models in our Fractal devices, the Fox models provide the most gain. Apart from that, it sounds familiar to the Bludojai model.

It’s a 50 watts amp, running on 6L6 tubes. It sports the same channels and controls as the Dumble ODS. The clean channel, apart from being the clean channel on its own, also acts as a preamp to the Overdrive channel.

Our models are based on the Overdrive channel. In the “Fox ODS” model the amp’s Deep switch is turned off, in the “Deep” model it’s turned on. The deep switch shifts the overall tonality of the amplifier, slightly increasing the low frequencies. This is often useful for single-coil guitars, which sometimes need a low-frequency boost. Both models are modeled with the Preamp Bypass (PAB) active.

There are two gain controls for the OD channel, available as Input Drive and Overdrive. On all amps like this, including those by Engl, Fryette, Carol-Ann and Mesa, the first control sets the “sensitivity” and the second one sets the amount of distortion. Cliff:


“Input Drive increases the gain amount as you rotate the knob clockwise. As the gain increases the tone is shifted from a treble and upper mid emphasis, which produces an up front sparkling tone, to a lower mid and bass emphasis, which produces a thick meaty tone.​
Overdrive increases the gain amount as you rotate the knob clockwise but with no alteration of the tonal balance.​
Different combinations of Input Drive and Overdrive settings will have a dramatic effect on the response of the amplifier and the personality of your instrument. It is easy to get familiar with the action of these controls and you’ll be amazed with your ability to make any guitar sound mellow, fat, soulful or aggressive.”​
Models with Input Drive and Overdrive controls always feel “elastic” and spongy, a real joy to play.

Because the model has so much gain, I turn down Input Drive to around 3.0.

It’s a Master Volume amp. This means that the amp’s distortion is created in particular by the preamp tubes, not the power amp. The Master Volume, which works in the power amp section, is still very important to the tone and feel. You have to decide for yourself what setting in the model works for you best. The default setting is a good point to start of course.


http://www.musicradar.com/reviews/guitars/fuchs-overdrive-supreme-50-watt-2-x-12-combo-240208​
About the cabs: Fuchs uses mainly Eminence speakers. We haven’t got those in our stock cabs.

Alternatively try stock cab #011. It's the IR of Buddy's dual-ported 1x12 closed-back cab. While Larry Carlton uses an old EV-12L in his, this one uses a modern replacement for an EVL-SRO, a Blackhawk AlNiCo WGS. There are more IRs of this cab in Cab Pack 17.

Friend of mine has one of those. Very smooth.

I would mention Steve Segal also as a famous Dumble player.

He is actually a decent guitar player but more famous as a Hollywood action star.

In amp circles he is well know for his Dumble collection. IIRC, John Mayer bought a Dumble from him?

In the last video at 00:48 the teddy bear mic holder is a technique used by top engineers in the field.
Undoubtedly the reason for the superior tone of this amp in particular.

barhrecords said:
I would mention Steve Segal also as a famous Dumble player.

He is actually a decent guitar player but more famous as a Hollywood action star.

In amp circles he is well know for his Dumble collection. IIRC, John Mayer bought a Dumble from him?
Click to expand...

Yup, he's not too bad of a guitar player at all. I thought I read somewhere that Joe Bonamassa also bought a Dumble from Steven Segal?

Moderator
"Hey Joe, buy this terribly expensive guitar amp from me or I will punch you in your face".

any chance of getting the non PAB model?

Vendor
How do you replicate the jazz/rock switch behavior? Which position is baked into the current models?

But this is not about Dumbles. This is about a Fuchs impersonating a Dumble. I don't know anyone that has a Dumble. Pretty good chance there is no Dumble in The Netherlands. I saw Robben Ford play one in the Hague once. I think he took it with him, though.
Last edited: Apr 15, 2016

I think I'd like to have more of these models with the PAB off modeled as well, like the Bludodrive is. On my amp, I use PAB to boost volume and tone for a solo, but always drop back to the off mode for rhythm.

Then again, I'm a little puzzled: we have an amp model like this Fuchs with PAB on, which bypasses at least the mid and treble pots in the tone stack. So in a real amp those controls would have no effect. But we also have a tone stack defaulted where the mid and treble still work. Which is cool, but then I start saying to myself, "Self, for the models without PAB on, how was the stack set up when the amp was modeled?"

So I don't know which way of doing things might be better, or why. Especially without intelligent defaults on the tone stack controls. All we know is that noon is a default that isn't intentional.

Well, there's one in Finland:


Dutch said:
But this is not about Dumbles. This is about a Fuchs impersonating a Dumble. I don't know anyone that has a Dumble. Pretty good chance there is no Dumble in The Netherlands. I saw Robben Ford play one in the Hague once. I think he took it with him, though.
Click to expand...

Watching the last clip in OP (by Greg Koch?) I realize this amp is not for me. He makes it sound great. But I have seen many of his videos, and he makes everything sound good (guess it's the teddy bear). I just like the sound better, when he plays almost any other amp.

It sure sounds good, but it doesn't sit well with my taste.

I like several of Buddy's IRs, but I saw something that I thought I should weigh in on.

Back when I was building more amps, I went through a LOT of speakers. So I've had several SROs (coffeecan AlNiCo) and a Blackhawk. The SROs are pretty amazing speakers, and my favorite cab is a Forte 3D Vertical with a G12-65 on top and an SRO in the bottom. The SRO really has the EV flavor, but has its own thing going, especially if you push it a little.

It weighs a ton.

I was hoping that Tex-Axe would weigh in on this thread......his multi page missives on Dumbles and related ephemera are some of my favorite reads.................

Smittefar said:
Watching the last clip in OP (by Greg Koch?) I realize this amp is not for me. He makes it sound great. But I have seen many of his videos, and he makes everything sound good (guess it's the teddy bear). I just like the sound better, when he plays almost any other amp.

It sure sounds good, but it doesn't sit well with my taste.
Click to expand...

The Last clip is done by German guitarist Gregor Hilden. Google him or search on YouTube- tons of nice tones to be discovered

Ahhh yes - that's the name, I couldn't remember. I have watched many of his videos. My point was that although he sounds (also) good with this amp, I have heard him have tones, I like much better.

As I understand it, the ODS doesn't really have "channels". The overdrive is just an additional gain circuit that it goes through (with its own tone stack). On my clone the amount of distortion on the overdrive is determined by a combination of the clean drive and the OD drive controls. I don't know how this compares to Cliff's two drive knobs in the models.

I'd guess that dialing down the two drives on the model is going to get pretty close to sound of the clean "channel" on the real amp.

Just wanted to say that his has become my go-to amp model after trying one of Yek's presets of this amp. Super smooth gain and response that works great for both rhythm and leads. It also cleans up really well with the volume knob.

It's also got a lot more mids than a typical Marshall even at stock settings, which helps it cut through the mix better.