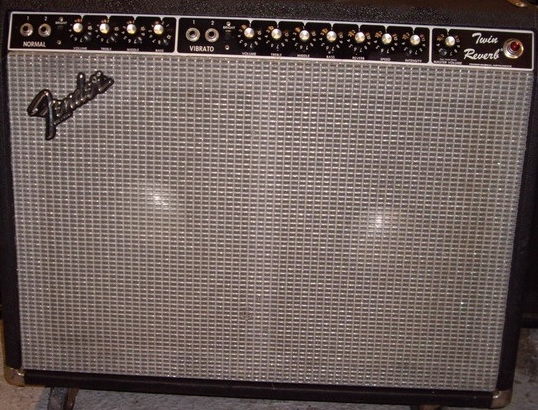 I haven’t done proper market research but the Twin Reverb may be Fender’s most famous / popular amp, up to this day. It’s big, it’s loud, it takes pedals well. And it’s ultra clean. To get this amp into overdrive requires a volume level that hardly anyone can handle. Unless you’re got your hands on a modded one. Also, the Twin can handle humbuckers well, which is not the case with some other Fender amps.


The 5F8 TWEED model is also a Twin (no reverb), but with a totally different vibe.​
The NRM and VIB models are based on a ’66 blackface 85 watts Twin Reverb, with the common AB763 circuit (just like the Band-Commander and Deluxe Reverb models). Blackface Twins were produced between ’63 and ’67. This particular amp was modded by Andy Fuchs of Fuchs Audio and breaks up earlier than stock Twins. Cliff:


"The Twin Reverb that the model is based on breaks up like that. The model is MIMIC'd and is extremely accurate. It's a Blackface Twin which breaks up easy compared to later Twins. Furthermore, as with all models, it is modeled on the "Hi" input. If you don't want it to break up as easy turn Input Trim to 0.5 to simulate using the "Low" input, reduce Input Drive and MV as necessary. You may want to turn the Bright Switch off as well. People who want squeaky clean usually turn the Bright Switch off on these amps. However, you'd be surprised that a Twin isn't nearly as clean as you think. It's just so damn loud that you get the sensation that it's clean because a light touch on the strings creates a lot of volume."​
The SF model is based on a different Twin Reverb, the Vibrato channel of a 100 watts ’71 silverface (circuit unknown, no Master Volume). When I select a Twin Reverb model, I usually choose the Silverface.


"If an alien came to earth and wanted to hear an American guitar sound, I’d play him my Twin with a set of Jensens. This was stated by a happy Twin Reverb owner on Harmonycentral.com. It could have been our own words. The Twin Reverb is the king of Fender blackface amps. Having two pairs of 6L6, the popular and traditional two-channel AB763 circuit design, a diode rectifier and enormous transformers (power & output), it offers tons of clean headroom and volume for unmiked gigs and really big stages. Where the other Fender amps break up at around 4 on the volume knob, the Twin stays clean up to almost 6 and will hold up against heavy drummers and bass players with clean notes sharp as a knife edge. This is exactly what the amp is made for, being played unmiked in in a gospel band in a 300-seat church every Sunday. It is designed not break up like the other Fender amps. You need to have your expectations set correctly to be able to appreciate the evil Twin. Warming nr 1) The big transformers and speakers makes this amp weigh around 40kgs, a burden too big for many gigging players who cannot (yet) afford a crew of roadies. Warning nr 2) Volume and clean headroom. If you want tube amp breakup and smoking tones with no pedals you will experience many fights with your band mates and club owners. Just as the other Fender amps the Twin needs to operate in its sweet spot up to sound sweet. After carrying a Twin Reverb on to the stage, the least you should deserve is to crank the bastard. Sadly, we are seldom offered the opportunity to turn the volume above 3 on a Twin Reverb. Instead we have played many nights with a thin and unpleasant tone, even worse with a sparkling, clean sounding strat.​
The Twin Reverb has two channels: Normal and Vibrato. Both channels have Volume, Bass, Middle and Treble controls and a Bright switch. The Vibrato channel has additional vibrato and reverb controls. Because of its Reverb circuit the Vibrato channel breaks up earlier than the Normal channel.

Each of the channels has two inputs. Fractal Audio models are always based on the input with the highest input level. To get the equivalent of using the lower input, set Input Trim to 0.500.

The Twin Reverb can be a –painfully- bright amp and model. I always turn off the Bright switch, and increase Treble slightly to compensate.

It also can generate a lot of bass, so don’t hesitate to turn that down a lot.


Note that the range of most Fender models is 1 to 10, while the model controls range from 0 to 10. For the OCD-crowd, here's a translation table, created by forum member Barhrecords.​
The Twin Reverb is usually equipped with two Jensen C12 speakers, JBM 120s and even EV-12Ls. I usually use stock cab 21 but there are more Twin Reverb IRs among the stock cabs.

I've used this model extensively over many years in my Grateful Dead cover band,

Jerry Garcia played Silverface Twin Heads w/ Preamp Taps fed to McIntosh Power Amps and JBL Speaker Arrays. One of the common mods for us Deadheads is to switch the Bright Cap from 120pf to 68pf. If you want to keep going for the Jerry Tone then grab a Strat and try these settings...

To copy the MC2300 Solid State Power Amp Jerry switched to in 1973 most people turn off the Supply Sag. I'm convinced there's a bit more to it than that but I prefer the 1970-72 tonal era where he using McIntosh Tube Amps anyway. I'm curious to hear people's thoughts about McIntosh Power Amps but I'm saving that for the Tube-Pre discussion when we get there.

I'm not a fan of this tone on it's own but in the context of a 6-7 piece band w/ two drummers it really cuts through the mix. In smaller contexts like a quartet or quintet I use a variation on the "Magic Six" with the Gain set to 4 for more headroom.

Additionally, this was the official amp of the Summer of Love / San Francisco Sound. A lot of bands from that era set everything to 10 and controlled the amp from the guitar volume knob.

One last note. I'm hoping to go into a studio soon and shoot some high end IR's of JBL speakers in Vertical Pine Cabinets and will share them here and in the RUKind.org forum when they're ready.
Last edited: Apr 8, 2016

@Adam Stein thanks for sharing those settings. Looking forward to trying those IR's.

I play in a band that used to be a Grateful Dead cover band. We do mostly originals now and an occasional Dead / Dylan / Marley cover.

I recently went back to create a more authentic Jerry tone. I used the "Klon" Drive -> Double Verb SF. I changed the power tubes to 6V6. In theory it should break up earlier, but to my ears it got tighter. Using the middle pickup of a 74 strat. I use the JBL IR floating around the forum. I think it originated from @groovenut ? I actually turn up the bass for my Strat and add proximity in the Cab block too.

Great post as usual, thanks.
Yek, you might want to change "Deluxe Reverb" to "Twin Reverb" in the 2nd last paragraph before the videos.

Moderator
Spent some time. I found that I liked the 'Lo' setting (input trim at .5), dialed up a bit more sag and more B+ and Treble at 3.5. A very nice clean tone that didn't rip my head off with treble but still cut like a mo-fo. Oh, and the bass HAD to come down...woo.

The DoubleVerb SF is the sound of all Danish pop music in the 80s, and I love it for it. I went all in and coupled it with Pedal Comp 1, 80s Chorus and the 2290 delay - BAM. Want a little drive, I added the FAS boost, worked great

Love this amp - use it frequently; I always wondered why the model broke up sooner than I would expect (I used to own one long ago).

In the chain, I utilize "spring" reverb in front (low in the mix)) and finish with a nice "hall" verb. Also, have been playing with a Bonamassa-inspired tiny slap-back delay in the 100ms range. Love to turn it up and get the clean headroom for strong dynamics.