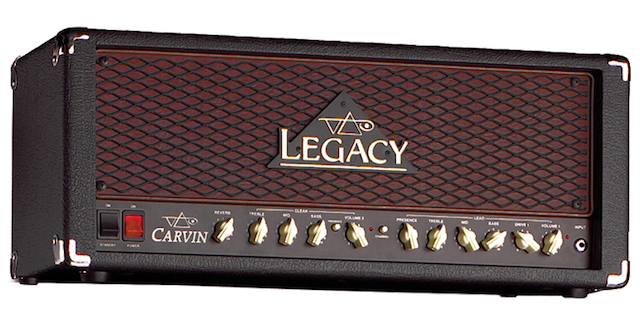 Legato 100: based on Carvin Legacy VL100, owned by Steve Vai

These models are based on the first series of Steve Vai’s signature amp: Carvin's Legacy VL100.


There are no Fractal Audio models of the Legacy 2 (which Steve Vai himself didn’t really like, alledgely) and Legacy 3 guitar amps.​
The VL100 is a two-channel EL34 100 watts head. The controls on the Lead channel are: Presence, Treble (11 kHz), Mid (650Hz), Bass (80Hz), Drive and Volume. The clean channel has not been modeled.

The amp is a bit of a strange beast because of its tone stack (Bass, Middle, Treble). Cliff:


"The thing that makes a Legacy unique is the tone stack. It uses a "James" tone stack which is more like hi-fi tone controls."​
And indeed, the controls are less interactive and their range is unlike other amps. For example, the difference between the outer positions of the Middle control is enormous. The "James" tonestack is also referred to as the "Baxandall" tone stack.


“For mild tube saturation, set the DRIVE control between 1 & 2. For some of the best saturation, set the control around 3 & 6. For full blown overdrive, set the control between 8 and 10.​
Drive settings above 8 are subject to over saturation depending on the output of the guitar pickups used. High-output pickups can over saturate causing sluggish distortion.​
Play your guitar with it’s volume at 10 and decrease the amount of drive until the crisp highs come back.”​
The "Cali Leggy" model has been the subject of lengthy discussions in the past. Some people write it doesn't resemble the real amp enough or that it doesn't let them achieve Steve Vai’s tones. I didn’t touch the model for a long time because I simply didn’t bond with its sound. I played it again when preparing this article and I found great juicy tones after some tweaking. Surprisingly I later came across those same settings in a demo video of the real amp. So I guess the model does represent the real amp well enough. Here’s what I settled on: Drive 6.50, Bass 7.00, Middle and Treble 3.50, everything else default. For higher gain, engage the Boost switch and turn down Drive.

The "Legato 100" model was added in firmware Quantum 4.01 and is another, more recent model of this amp. It's based on Steve Vai's actual VL100. It's a dark model at stock settings with loads of bass. Don't hesitate to turn up Treble and Presence.

​
And reproducing Steve Vai’s sound? Well, you would have to use those Evolution pickups on his guitar, and add a Boss DS-1 or Ibanez Gemini pedal, and insert a chip into your head with his skills and creativity. Not everyone likes his extravaganza, but IMHO there isn’t a shredder today who is as creative and adventurous as Vai.

Nice!
I love Vai and this amp model sure is underrated.
I got some pretty defined and crunchy rhythm tones with my 7 string and this amp last week.
The tone stack is kinda cool, very apparent.
S

I'll have to give this amp another shot, I've never been able to bond with it either, but judging by the sample settings I can see why, my settings would be way off. This article also brings up something I feel we've been missing in the AF2: A Boss DS-1.

I think this amp needs an update.. lots of people reported it as not accurate, and I "think" I remember Cliff saying he doesn't even have one.

dpeterson said:
I think this amp needs an update.. lots of people reported it as not accurate, and I "think" I remember Cliff saying he doesn't even have one.
Click to expand...

That was before Quantum and maybe before G3?
S

Side note for me: Not so much a fan of Vai's solo style, I like him better in the confines of a band, or with Frank but man he may be the best guitarist ever. I'd love to hear him hit a sour note just once to prove he's human.

I played through one of Steve Vai's in the 90s. I LOVED it. And yet, I never "bonded" with the model. I will also have to give it another shot.

steadystate said:
I played through one of Steve Vai's in the 90s. I LOVED it. And yet, I never "bonded" with the model. I will also have to give it another shot.
Click to expand...

Every time I have re-tried these amps with settings as Yek has suggested in this ongoin thread, it proves to be fairly revelatory, specially given the recent advances by Cliff and co...this Legacy being no exception ,...

I tried this amp out on a whim a while back, really cool sounding. Amazing for leads.

It can sound pretty damn tight without a boost as well.

EQ is quite interesting, and very sensitive. Very small tweaks really have an effect on the sound.

Strangely enough, it's always been an amp model I've been able to get along with easily.
I've always been a huge Vai fanboy though, I used to do his 10 and 30 hour guitar workouts in high school.
I've watched his performance at Clapton's Crossroads festival more times than is appropriate.

I wouldn't say it's a very versatile amp, but running a DS-1 and/or tube screamer in the front of it and into a cab with V30's, you'll find the "Vai sound" not that hard to achieve.

Yay for a video of Rebecca Dirks

stm113 said:
Side note for me: Not so much a fan of Vai's solo style, I like him better in the confines of a band, or with Frank but man he may be the best guitarist ever. I'd love to hear him hit a sour note just once to prove he's human.
Click to expand...

I saw a video once, some years back, with Vai and Satch hanging out and really - literally - just jamming like 2 "normal" guitar dudes... completely improvised on the fly from both... and they both borked a note or three... it was very humazining! It made me feel much better about my own abilities, especially as it relates to improvised playing. It also made them much more relatable as musicians and people.

I've owned a Legacy for years and can honestly say the Fractal model sounds nothing like it. I would love to see this amp updated on the Axe

It is pretty amazing how much the bass, mid and treble knobs change the tone on this particular amp. Turn one of them just a little bit and it completely changes the tone. Spend some time on this one and it can be rewarding.

I've been a Legacy fan forever (read: the real, physical one). I'd love to know what are people's favorite IRs to use with the model.
S

WHY can't I get the Leggy to sound like that?
X

These should 100% have their own sub-forum, they are a cracking resource!!
P

I never liked this model. Now I know why.
I used it with the stock 2x12 Legacy cab and tone controls around noon. After reading Yek's post, I tried it with the 4x12 V30 (stock cab #062), bass turned up to around 7.5 and treble rolled down to around 3.5. BIG difference, now I like it a lot!
Thanks again to Yek for this awesome resource!!!

Kudos Yek, for giving this under-played amp block a good review in this thread. I have heard Steve Vai get some awesome sounds with his Carvin Legacy, and this model deserved some love. I especially love his thick rhythm tone in this clip (after the clean intro)