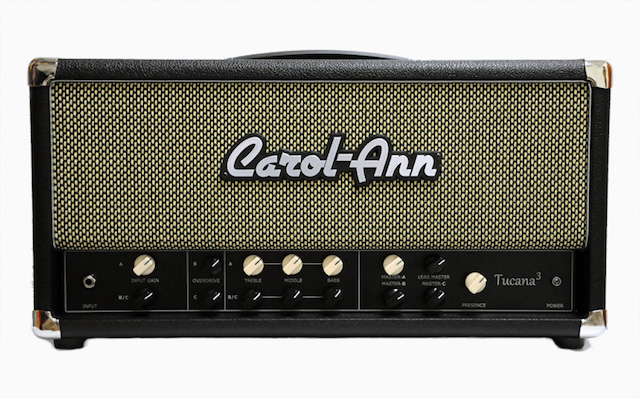 CA Tucana: based on Carol-Ann Tucana 3

This is the third model in our series which is based on a tube amp from amp builder Alan Phillips (Carol-Ann amps).

The various Carol-Ann amps have always received a lot of praise from Cliff:


“One of the best amps in the world IMO. I have a Dumble and a Trainwreck and various other boutique amps and the Tucana is better than all of them."​
And did you know how he tests each of his amps before shipping them to the buyer? He plays them in his band at a gig.

The Tucana 3 is Carol-Ann’s flagship amp. It’s a 3-channel amp with KT88 power tubes which run at 75 watts. Channel 1 is for clean sounds. Channels 2 and 3 (Overdrive) are identical.


“Welcome to our flagship model! The Tucana 3 is our latest amp in the Tucana range.​
Tonally these amps are designed to cover many styles and are very suited to session players and players who need a very wide palette of excellent tones. With the 3 channels, they can stray into higher gain levels, yet still retain full note definition and separation even with complex chord passages and have an ultra-quiet noise floor.​
The first new feature of this amp are the separate Input Level Controls for the Clean and OD channels. This gives much greater flexibility than any of the previous models. It is possible to set the Clean Channel for a little more crunch or for maximum clean headroom.
The overdrive range can be set very easily with the OD Input Level to suit the playing styles or musical genre from a range of blues through rock to modern high gain styles.​
The power amp section runs the KT88s at a moderate 75W ensuring very long tube life. The transformer set has been designed to retain a ton of warmth, a tightness in the low end that has not been previously seen in the Tucana series.​
The Tucana 3 is very forgiving on cabinet choice and works well with many speaker / cab combinations.”​
Alan Phillips:


"It's very very difficult for anyone to get a bad tone out of the real amp. It's designed that way, the range and limits on the controls, even the biasmon system makes it difficult for even a very inexperienced player to FU. The real amp has a more British overtone to it due to the fact I am British and I designed it. The gain staging, overdrive voicing and output stage are night and day to ANYTHING Mesa, any owner of the real amp would attest to that."​
"The Tuc 3 is very very tolerant of most cabs and speakers, unlike say the OD2. I feel people need to approach this model very simply. Don't mess with extended parameters, basically don't try and redesign it. Use a reliable Celestion based cabinet model. I have a fantastic 4x12 with 2 old greenbacks and two old v30s that is the best cab I've played the real amp through. In actual levels of gain with the two adjustable gain controls, the amp has a maximum gain level very similar to the Triptik, the setting of these two controls with respect to each other is critical."​
It has separate Input Level controls, Bass/Middle/Treble and Master controls for the Clean and for the Overdrive channels. Presence is shared. Channels B and C have separate Drive controls. There’s also a gain boost through the foot controller.


"Real world, it has same amount of actual gain as the Triptik. Way more than most people would need for recording or live playing. Input gain on 10 o clock, gain on 2 o clock is a 70s /80s lead tone, put the input level up to 2 o click and it's a very sustained lead tone or a very modern heavy rhythm tone."​
"You don't need to crank the real amp to get a ton of overdrive. I actually designed the original for myself and I play in a rock cover band. There's nowhere I would ever be able to get the amp to the point of pushing the power tubes in to overdrive. You gain stage a design based on its application. For a design that needs a lot of overdrive at a low volume, you do most of that and the harmonic makeup in the preamp. The Tucana falls in to this category. The master volumes in a 500 seat club rarely get above 10 O Clock on the real amp and at that point there's still tons of clean headroom left. Of course the power amp adds to the harmonic content, but it adds very little overdrive. Another interesting point to note is that the Tucana has a high pass filter in the power amp feedback loop, which gives you a nice tight low end because the bass is subjected to more gain. For an amp designed to be pushed hard in to power tube overdrive, this should be omitted as all bets are off in the feedback loop when you hit the rails. In other words that filter requires headroom to function properly, as does the presence control of any amp where it's a component of the feedback loop."​
The Tucana is a Master Volume amp. This means that the amp’s distortion is created in particular by the preamp tubes, not the power amp. The Master Volume, which works in the power amp section, is still very important to the tone and feel. You have to decide for yourself what setting in the model works for you best. The default setting is a good point to start of course.

The clean channel and the overdrive channel have been modeled. The models have received a lot of praise from Fractal Audio users.

Cab #121 (1x12 Triptik UltraRes) works well with the Tucana. But many stock cabs do so.


"Now I can only speak for the actual amp, but my preference of speaker is a Celestion Creamback 65, though I gig these regularly with a 2x12 with Celestion T75's. Its pretty forgiving on speakers compared with some models.”​

Currently my go to amp in the axe. When Q2.x came out I just couldn't pull myself away from this amp!!

Thanks for doing this series Yek, it's my new morning paper...

This has been my go-to lately as well.
I love all the Brit amps in the Axe....but this one just has a touch more clarity IMO. Love it.

Once I started focusing on not using 10 models a night, the Tucana and Triptik became the do-all amps in the long list of Axe Fx options. In the AX8, I have a whole night's worth of presets built on them. The Maz 38 also works well in this group.

If I were to buy a physical amp today, the Tucana 3 would be in the very short top of the list as a candidate for me.

Is there a defining difference between this and the triptik?

To my ear the Tucana is a little warmer sounding, but has the same gain characteristics. Maybe that's in the power tubes. They can cover a lot of similar ground. The Triptik modern is the more gainy version in the Axe Fx if you need that. Clear as mud, I know, but like some Fenders... They are similar but different, and you just have to play them a while to hear it.

Rick said:
To my ear the Tucana is a little warmer sounding, but has the same gain characteristics. Maybe that's in the power tubes. They can cover a lot of similar ground. The Triptik modern is the more gainy version in the Axe Fx if you need that. Clear as mud, I know, but like some Fenders... They are similar but different, and you just have to play them a while to hear it.
Click to expand...

i just dimed the bass, middle and treble to 10 and it sounded great

It's been one of my go to amps for a little while now. I'm transitioning from playing mostly death metal to a little more laid back experimental kind of music. It's been a very satisfying amp block.

The Tucana has a little more of the Dumble thing going on to my ear. It's a bit thicker than the Triptik.

The Tucana has become my favourite amp. Earlier this month I rewrote all of my patches to use the Tucana, replacing a Blues Deluxe and a couple of Dumbles.

Good job & many thanks for putting this up. Will definetely work on this amp at return from the caraïbes. Thumbs up!

I find these reviews and information very helpful when going for a new sound or creating a new patch!

the Turcana 3 is a killer amp…. I absolutely adore it….

Afraid to try another amp - I love the C.A. (go-to/staple currently) for so many things, but I guess I'll have to try the Tucana 3

This stuff is crazy addictive. Something I could never do IRL (couldn't hump that many amps around, much less afford them all). Love that Alan/designer is part of the community and modeling.

Same here. The Tacuna 3 has been my go to amp for many fw versions now.

The Tucana Lead has replaced the Dumble ODS in my lead preset which I was using for a long, long time. It has a great feel and is very expressive, articulate, and harmonically rich...sweet amp.

The level of the Tucana Clean seems really low to me. I had to use about +6 to +9 on the amp block level to balance it out. That's unusual for my setup. My amp block levels live in the -12 to -20 range.

The Tucana Lead is really a great great alternative to the Dumble. Very nice response at default settings.