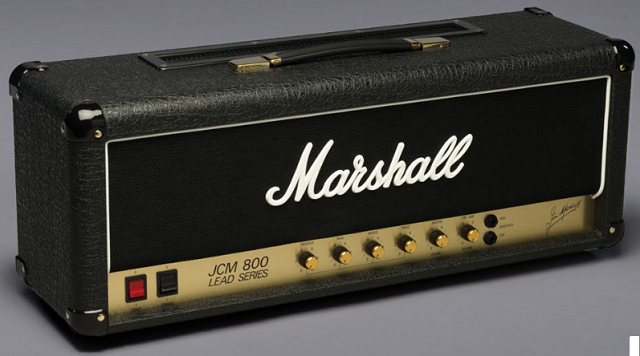 Some amplifiers define an era or a particular style in music. The JCM 800 is such an amp. It’ll always be associated with hard rock and metal in the ‘80s and ‘90s. Slash, Iron Maiden, Slayer, etc. All hard rock bands used them.


“JCM” are Jim Marshall’s initials. “800” denotes the decennium in which it was released, followed by the JCM 900 series in the 90s and the JCM 2000 series in the new millennium.


"It's a vertical input Canada export version. I went through several before settling on this one as it was the best sounding by far."​
It’s a simpel single channel amp, with Low and High Sensitivity inputs. The model is based on the High input.

Read the handbook of the current re-issue.

An unmodified JCM 800 is a very harsh amp at lower volume levels. To make a JCM 800 sound less brittle, you have to turn up that Master Volume, or drastically reduce Treble and Presence. This applies to the model too. Cliff:


"It is a very bright model. However, it sounds exactly like the amp it was based on. If it is too bright, you can adjust the various tone controls and parameters to reduce the brightness to your tastes. They are designed to be run loud and the brightness decreases as the MV is increased. The sound of 80's hair metal for sure."​
"Rips my head off here. I have to turn the presence way down. Check the MV. Too high and will get muddy."​
"Those amps are all designed to get their character from power amp distortion. If you don't push the power amp all you are hearing is the preamp which is voiced to be trebly. The power amp then compresses the highs and the sound gets fatter."​
"That "interference" is due to all the treble peaking used in the design. JCM800s have quite a bit of treble boost. When you first attack the string the note is unpitched. It's basically a brief explosion of noise. The treble boosting amplifies the upper frequencies of this noise burst which is what you hear. However, when you playing in a loud mix that treble boosting helps the sound cut. Modern designs use more carefully crafted treble boosting to retain the cut but tame some of the harshness of the attack. This is accomplished typically by putting a capacitor in parallel with the plate resistor(s) which rolls off around a few kHz. This preserves the treble boost in the upper midrange but softens the attack. I believe the SLO100 was one of the first amps to do this. You can see this in the Axe-Fx II as your Triode Freq parameters. You can soften the JCM800 attack by lowering the Triode Freq values. Most modern hi-gain designs use some form of HF rolloff like this. Another reason is that JCM800s use relatively low amounts of negative feedback (which is why they're so loud). This causes a treble boost in the power amp. Increase the Damping parameter to increase the negative feedback."
​
Another way to make the model of this amp less bright, is to turn off the Bright switch. This is equivalent to modifying the real amp by removing its treble peaker.

It was common practice to use a pedal such as the Tubescreamer to shape the tone and distortion of the JCM 800. Set the pedal’s gain low and turn up its level.

A JCM already is an angry-sounding amp. Adding the renown Jose Arrendendo mod makes it even meaner. This is accomplished by turning on Saturation.

Alternatively, or combined with Saturation: try turning on Boost on the amp’s Advanced page for even more gain.

The "Brit 800 Mod" model is based on the JCM 800 that has all the common mods applied, such as removing the treble peaker and more gain, to sound heavier and less strident. Cliff (about the Brit 800 Mod model in Quantum 2.01):


"I changed the 800 Mod considerably from Quantum 2.00. In 2.00 I was driving the last triode stage much harder but in real life you wouldn't be able to drive the stage that hard so I lowered it to a realistic value."​
The Brit 800 and Brit 800 Mod models can be used with a lot of stock Marshall cabs, listed here. Take your pick from G12-M or G12-H speakers, or the higher-powered version G12-75, or the V30.

Great article, another amp, I will dedicate an evening to

I do think, it is a bit of a stretch to mention Slash as a JCM800 player. I know, he has used them live, but I do not think, he has made any of his major recordings with a JCM800.

Smittefar said:
I do think, it is a bit of a stretch to mention Slash as a JCM800 player. I know, he has used them live, but I do not think, he has made any of his major recordings with a JCM800.
Click to expand...

The #34 mode refers (I believe) to the S.I.R. #34 that he used for the Appetite recordings, more or less stole from S.I.R. only to have it taken back, when they did production rehearsal at S.I.R. - I believe the same amp was later used by George Lynch. Nobody knows, where it is now.

Smittefar said:
The #34 mode refers (I believe) to the S.I.R. #34 that he used for the Appetite recordings, more or less stole from S.I.R. only to have it taken back, when they did production rehearsal at S.I.R. - I believe the same amp was later used by George Lynch. Nobody knows, where it is now.

Not quite.
The full story is in tomorrow's article. (Cliffhanger)

Sorry, it seems I have my Marshall/S.I.R. lore mixed up a bit, the super Tremolo was S.I.R. #39
http://www.slashparadise.com/equipment/amps-slash.php

Smittefar said:
Sorry, it seems I have my Marshall/S.I.R. lore mixed up a bit, the super Tremolo was S.I.R. #39
http://www.slashparadise.com/equipment/amps-slash.php
Click to expand...

Even that is disputed...

Yeah, I just did even more reading on the subject - looking forward to tomorrows article

Moderator
This model (simple 800, not the MOD)is the closest one to the Marshall tone in my head...Plexi 100 running a close second.

A bit of a struggle to balance that damned treble, but once you have it...boom.

I have a great 2204. When I first bought it, I thought it was broken because it was so harsh!! (Had previously only owned a plexi).

When you get the master right, it is "the" sound of 80's rock. It has deceptively less distortion than you think too. When I'm playing it I often think I don't have enough gain but when I playback the track, it's spot on.

Anyone care to share a block and a can recommendation. I find it extremely harsh bordering unbearable

electronpirate said:
A bit of a struggle to balance that damned treble, but once you have it...boom.
Click to expand...

I never really liked them originally but a couple months back I decided I needed to figure these amps out, since I've always heard so many awesome recordings and clips from them. After a few tweaks, I'm not sure how I didn't figure them out sooner!
R

As a teen, I was such an eneducated goof when it came to amps and how to run them. When my band used to rehearse, we'd rent a practice room at one of the local studios. It was equipped with a JCM800 and since I knew all my guitar idols used one, I thought it would be the bees knees.

Turns out, it was just the bees.....like an angry swarm of them lol. I had no idea how to dial that damn thing in back then and knew nothing of using a tube screamer. It was just a trebley mess.

The next few times we went there I refused to use it and instead I brought my Crate combo amp.....because that was the sound!!!

Like I said, an uneducated goof. I'd give anything to go back and give it another try knowing what I've learned through the years.

That quote was in response to a question I asked Cliff a few years ago now...... at the time I thought the model had an a
unnatural 'explosion' of white noise during the attack phase of a picked note. I even dug out my old 2204 to test and found that it did the 'explosion' though not so much as the model.

(It was so long ago it may have even been before AFXII..)

okay... I got my real 2204 out after reading this thread too

Smittefar said:
Anyone care to share a block and a can recommendation. I find it extremely harsh bordering unbearable
Click to expand...

A while back, maybe around firmware 17 or 18? Cliff posted in a thread about moving the 'Master Volume' location in the 'Brit 800' to 'Post-PI'. So I (and a few others that caught that post..."Clarky") tried it out and Boom........What a monster. Different than turning on 'Saturation' and/or 'Boost'.

Me too. Unfortunately not as an Axe FX parameter....

Hellbat said:
Me too. Unfortunately not as an Axe FX parameter....
Click to expand...