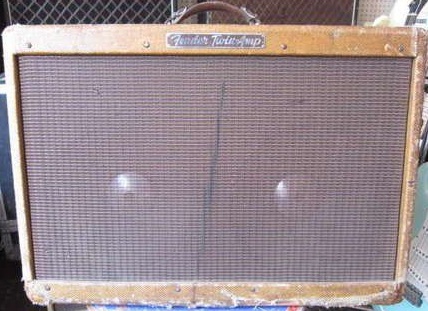 The name of the model is very similar to the 5F1 Tweed, but boy, what a difference!
The 5F8 Tweed model is based on a Fender "high power" Twin-Amp from the Tweed era (Tweed Twin).

This is a model of Keith Urban's personal #1 Twin-Amp. Hooray for Fractal Audio!


The Tweed era is the earliest period of Fender amplification (late '40s - early 60s'), before the Blonde, Brownface, Blackface and Silverface models. "Tweed" is based on the cloth covering used at that time, as seen in the picture above. Tweed amplifiers typically break up earlier than later "cleaner" models and are known for their warm tone. More information.​
Tweed-era amps are very collectible. In fact, this Tweed Twin-Amp is listed #3 on Vintage Guitar's list of the 25 most valuable guitar amps! That's higher than SRV's famous Vibroverb model.

This particular model is a "narrow panel" Tweed model. This refers to the panels around the speaker grill which are narrower than earlier "wide panel" models such as the 5F1 Tweed (Fender Tweed Champ) model which looked like old televisions.

So this is an early version of the famous Fender Twin. Note that, as with all Fender amps, early non-reverb models like this one, are very different from later models with reverb such as the Twin Reverb. The high-power version is based on the Fender 5F8 circuit. More technical information.
The Twin-Amp is said to sound similar to a Bassman, but warmer and larger. More information about the Fender Twin models. Other famous Twin-Amp players besides Keith Urban: Keith Richards, Eric Clapton, the late Rory Gallagher and Joe Bonamassa.


BTW, I don't know where the name "Twin" came from. This amp does not have two channels, just two inputs. Maybe it's because of the two 12" speakers?​
This amp marked the start of a period when Fender started to design amps which were loud enough to fill a large room by themselves, without the assistance of a FOH sound system, with enough headroom to stay clean when played loud. That's why this model is referred to as "high-power". It has four 5881 power tubes which put out around 80 watts. There also is a low-power 40 watts Twin Amp, based on the 5E8 circuit.

This amp doesn't stay as pristine clean at higher volume levels as the later Twin Reverb, especially when you play it with humbuckers. But it still has a lot of clean headroom. With single coils you have to crank Input Drive to get it into overdrive. And even then it doesn't distort a lot; compression increases and the tone gets fatter in a nice way.

This model is not as bright as the later Twin Reverb. In fact, if you combine it with its stock cab (#020: 2x12 Double Amp KSM313), it becomes a rather dark-sounding amp. So be like Keith Urban and turn up Treble and Presence. Yes, this Fender has a Presence control, just like a Bassman.

The original amp provides a Bright and Normal input to plug the guitar into. AFAIK it's not documented which input has been modeled, but Keith Urban uses the Normal input.

Note that the range of the controls go to 12, so you can't copy those settings exactly to the amp model controls. Here's a translation table created by forum member Barhrecords.


A full collection of IRs from this amp can be purchased in Cab Pack 15, The American 2x12 Collection: http://shop.fractalaudio.com/Cab_Pack_15_The_American_2x12s_Collection_p/fas-801-0015.htm​
The amp originally came with Jensen P12Ns. A Fender re-issue of the '57 low-power Twin-Amp had Weber AlNiCo speakers. So if you prefer those speakers instead of the stock cab, check this page for 2x12 Fender stock cabs or 2x12 AlNiCo stock cabs.

Put a MetalZone before and you got a ripping monster

Moderator
To add a personal note:

Great post! Thanks for sharing the history and tips on how to use it. I had never tried to reduce the gain and go clean on this one, likely because the character of the gain is exceptional. This is an amp that begs you to let a chord ring out. Strike an A and marvel at what happens as the gain evolves and blooms.

Thanks Yek! Thanks for the education.
R

Hi Yek
It's impressive how much you contribute to this forum and the wiki - Axe Fx users owe you a big debth of gratitude my friend.

The Tweed Twin is my absolute favorite Fender amp, just great classic Fender tone for blues, RNB, rock, funk ect. - everything you'd use a Fender for.
I use it with both single coils and humbuggers, solid body and hollow body guitars.
To me the Urban Tweed Twin amp sim alone is worth the price of my Axe Fx XL+.

I'm quite sure that the Twin designation is due to the twin 12" speakers - most other Fenders or actually just amps at that time had a single speaker - twin 12" speakers with a 80 watt amp was a big and loud beast then, well it still is.

Another very noticable Tweed Twin user is Eric Clapton.
Eric reintroduced the Tweed Twin in his set-up around the "From the Cradle" period (where he also still used the Soldano SLO), and have since had Tweed Twins in his line up, some times as the only amp type, some times alongside other amp types.
I know that he had Fender Custom shop build him a set of Tweed Twins, I think John Suhr build him two as well (or did JS build the CS Twins?) - I can't remember right now.
The Dennis Cornell Clapton signature amp is also a take on the Tweed Twin.

Fractal Audio Systems
Moderator
I added a link to Cab Pack 15 in your original post. It contains dozens of IRs captured from Keith Urban's amp.

Here is the table to translate Keith's settings:

Moderator
Thanks, adding this to OP.

Thanks yek- nicely done. I've owned quite a few Fender amps over the years, including several vintage tweed era amps (favorite was an all original '59 Bassman). But I've never had the chance to even play an original tweed twin (low or high wattage).

Hi Yek! Great idea, very good thread you started. For me the 5F8 is best for warm and large Fender tones, thank you for the details!

Great series Yek, a lot of fun to read...makes one stop and get 'deep' into the heritage and tonal history of the amp vs just seeing a circuit model on a screen.

I've used the Doubleverb as my clean amp for some time and I thought I'd experiment more with this amp after reading this thread. I haven't played with this amp since before Quantum and was due for a revist.

I really like this amp; very big and 'throaty' vs the other Twins. It matches so nice with single coils and gives that big, warm, Fender-y girth without tons of icepick but sweet top end...reminds me of my '65 Showman amp. This amp 'plays' well big time; it's my new clean amp as I love how it feels; certain amps you bond with and expression is just that much more inspired. I'll use the DoubleVerb in "Y" for a brighter/toppier version. Love all these options...lots to explore.

Thanks Yek - much appreciated.

Yes I got to hear Red Volkart's tweed twin it sounded great .... I see Urban has an overdrive special Dumble those are quite rare guess he did not buy David Lindley's sss. hmmmm wonder if he got that one from Mayer.

A buddy of mine told me the stones changed speakers after every show they used to give him the speakers
he had a huge facility in Stillwater Oklahoma and when they would come through they would park the busses there and he would get the speakers they got rid of.

It dawns on me Eric Johnson had one but it was covered in this fugly brown naugahyde with cowboy motif
he bought that amp at that vintage shop above the continental club in Austin.
That one sounded amazing with the 59 les paul he had at the time.. It was not the prettiest amp ive ever seen though with that cowboy crap on it.. Had red grill an odd bird....
He played that one at Antone's and that was the only time I heard or saw it again..

One of the alien love child gigs....


Claptons tweed twin broke down and he took it too Ceaser diaz and Ceaser
took the transformer apart and unwound the wires till he found the break and resoldered that and
the amp came back to life....!

He called Clapton over to hear it and he said Clapton played all the cream through it
and just blew him away on it and then said "What you didnt think I could still play that stuff " ?
Ceaser said well and Clapton said ive already done that......


That amp was played that night at madison square garden for the tribute to Bob Dylan..
George Harrison was there Tom Petty and Mike Campbell were there and Campbell came out playing a 57/58 blonde
jazzmaster the reason I know this is I used to own the guitar I bought it for 350 dollars after some kid came into a music shop in Houston and wanted an acoustic in trade for it..
The guitar had been special ordered for Christmas and was blonde with brass pickguard the body had 57 and the neck was dated 58 so it was a prototype...

Here is Claptons back to life at Bobs tribute..

a few adjustments and im in the zone already...

Here is my old jazzmaster :

Thanks Yek for the hard work you bring here if I forgot !
O

Which IRs would you recommend to look at first from Cab 15 -- (for live use FOH --- not recording).

Old News said:
Which IRs would you recommend to look at first from Cab 15 -- (for live use FOH --- not recording).

Thanks Yek, great write up. Amp is amazing my new favorite clean to edge of breakup tone. BIG and full and the breakup even in the bass doesn't flub like some Fenders. For me, add some Comp and Reverb and KPOW there it is, fantastic !