Does anyone else not gel at all with acoustic guitars?

Rex said:
1) If you rock those songs as hard as you can on an acoustic, they'll even be more bad-asserer when you switch back to electric.

2) Why are you running acoustic anyway? Does your amp shut down if the drummer doesn't show up?
Click to expand...

I don't know. Some of the other members talked about doing an acoustic show someday and I was just sticking it out giving it a try before just saying no. It really does help with finger strength though after going from acoustic back to electric. It makes it feel easy.

SRV basically played ocean liner anchor chains for strings on his electric guitar. I wouldn't be surprised if he didn't even noticed the difference.

I got a new Taylor on the way. Koa k24ce. Wanted a nice one to invest in for sitting on the deck in the summer whilst gazing upon a sunset with my fav Craft beer.

I love my acoustics. I have an early Taylor and Larrivee. I actually play them more. Just my situation that I'm learning songs on acoustic to play with my wife and just kind of jam on electric.

I've had troubles connecting with acoustics in the past until i bought a Riversong guitar. Its neck feels like a super strat and it easy to lower the action. I started with an acoustic and always have one around. I practice scales, chords etc and even "electric" songs on it. It really helps me hear what is going on and connects me to the notes before I add all the effects.

Quite the contrary. I love my acoustic guitars!
E

For me it's always been a struggle.
I loved a twelve string but sometimes I wanted to switch mid song to a six string.
I then sold my two takamines and gots me one of these: 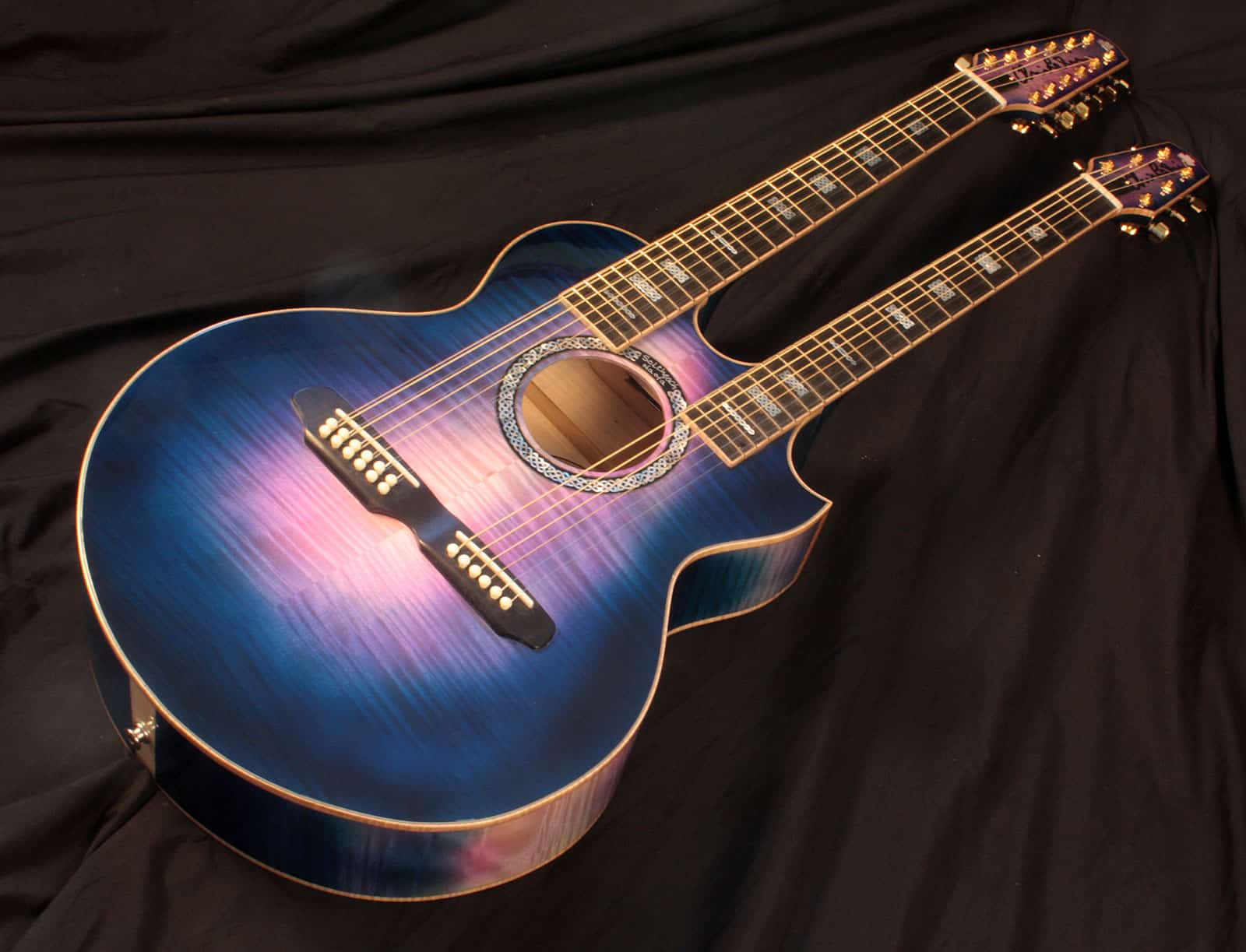 I would say I've always been the same, learnt on electric have had a couple of acoustics over the years, but always because I thought I should rather than I played them.

In response to this thread I've deliberately left my acoustic out (a really nice 1965 J-45) - and I've remembered why I got it, it's great fun - makes you play a different way and makes a nice change

It takes getting used to because of the thicker strings. Honestly, I never gelled with steel string acoustics for years until one day I happened upon a 1985 Martin HD-28. I knew at first strum that this would be mine. I realized that I'm so used to the best gear.....my guitars are Fender and Gibson Custom Shop....I use an AxeFX....my amps are Friedman, Tone King, vintage Fender. Maybe I'm a bit of a cork sniffer. My acoustics have to be good ones.

My problem is that I'd always cheaped out on acoustics. I had to bite the bullet and get a really nice one.

I remember once around 2011 I went to an acoustic jam. After mainly playing electric, I was handed a Fender acoustic that was absolute murder. High, high action, stiff feel, dreadful tone. I found out later that Fender is not exactly known for their acoustics and that I was playing a real beater. I couldn't rip out jazz licks like I could on my Les Paul.
E

peteri said:
I would say I've always been the same, learnt on electric have had a couple of acoustics over the years, but always because I thought I should rather than I played them.
Click to expand...

That's hilarious. I have one acoustic guitar for the same reason. I thought, as a guitar player, that I should have one. Now I am trying to figure out what to do with the thing. I never play it, I don't want to play it, it needs to be "humidified", and it takes up space. I am certainly not going to carry it to gig and do acoustic on a song. I am thinking of selling it.

A couple of years ago, I was at a restaurant, with my family. They had two guys singing and playing guitar, doing some nice vocal harmonies. They were covering a lot of older stuff, like Ricky Nelson and Everly Brothers (it was Sunday afternoon at golf/country club type family restaurant, open to the public). They sounded good, we were enjoying the background music. I couldn't see them from where I was sitting. When we were leaving, I got to actually see them. They were two older guys, in their 60's, one with and acoustic and one with an 80's style PINK Jackson (see attached pic). I thought it was two acoustics. I'm not saying that the Jackson sounded just like a Martin. Without seeing them, and listening to the mix, I just assumed it was two acoustics. That made me realize that I never need to play acoustic again. If I ever did an acoustic gig, I am going to bring my Jackson soloist and make it sound as acoustic as possible.

I've never played an acoustic off-the-rack that played the way I want it and I've had my hands on probably 100s of them over the years.

Ovations were always the easiest to set up because the US models have shims under the saddle that make it easy to adjust action there. Assuming the nut is done right and the neck relief is what you like, you're good to go. I've got a couple of Ovation Adamas (6 and 12 strings) that play as well as my electrics and yes, they have heavier strings (6 string is 11-52).

I also own a couple of Emerald acoustics (X20 dreadnaught sized and X-7 travel sized) which also play like butter for me. All I had to do was sand the saddles, tweak the necks and I was good to go. The nice thing about the Emeralds is I was able to find out from the manufacturer exactly which saddles they used so I ordered a few spares in case I went too far.

Finally, I order custom gauged strings from Curt Mangan which allows me to balance playability and tone.

One common thread between all my acoustics is there very little to no wood in them. My Adamas have very thin wood and carbon fiber sandwich tops and the Emeralds are 100% composite. The result is the guitars are all very responsive and dynamic, more than any traditional acoustic I've ever played.
You must log in or register to reply here.

T
Virtual Capo - so awesome I am selling alt tuning guitars, but anyone else noticing some high freq tone loss?