Feeding two inputs into the AxeFx II to drive two internal stacks. On the fretless neck I have a freeze-reverb/delay pedal and then... well, this is what happened

Multidimensional free flowing fretless harp guitar in spaces. The wonderful Tim Donahue Signature axe is a very alive instrument, thanks to massive sympathetic vibrations all through the body and twelve strings. In this piece I was particularly amazed by how good it sounds with a distorted amp stack on the fretless neck and a wide stereo chorus on the harp strings, by the end of the track. Even though the harp chords leak through the distortion channel a bit it stills sounds good, because that "filth" kind of talks to whatever I'm playing on the fretless neck. So it might be an ugly sound when just strumming a chord but when performing music it just works. Sweet music with ugly sounds - that's something I always like.

Pity I has to shut down the computer. I will return and listen to this piece again.
2

Very nice, is the preset available for FX II? THX!

I'm afraid that would not make sense because the two patches I play in this track are both tweaked to fit this particular dual output guitar. I'm plugging the harpstring's output into one row and the fretless neck into another row inside the AxeFxII. The first patch with the clean sound, don't even use Amp and Cab blocks; it's just a Filter and GEQ (5 Band Passive) to set the tone of the EMG pickups. And the freeze-delay effect is meticulously trimmed to this particular guitar's output level; I use a Delay block (Digital Mono) and assign the delay feedback in a reverse scaled manner to the same modulator I have assigned to the main input volume.

It won't work on another guitar, since it is such a delicate balance to keep a delay block at close to 100% feedback without loosing the tone or overloading the patch.

The second patch I'm playing through, the distorted sound at the end, uses just the reverb block's Hold parameter assigned in a reverse scaled manner to the volume pedal modulator. Important for this sound though is that the reverb block has its own row and goes through a phaser and multicompressor before merged back into the main row.

Hm... so this isn't played on the Stick, it's a harp guitar?

Yes. Six strings on a fretless neck and above that six harp strings tuned around the same range as the neck strings. Each group of strings has its own EMG pickup and output (dual output just like the Stick). Most of the cool sounds in my recording comes from this guitar, the Axe patch isn't really any spectacular. Here's the web site of Tim Donahue who designed this instrument in the early eighties and still plays it better than anyone.
http://www.timdonahue.com/harpguitars.html 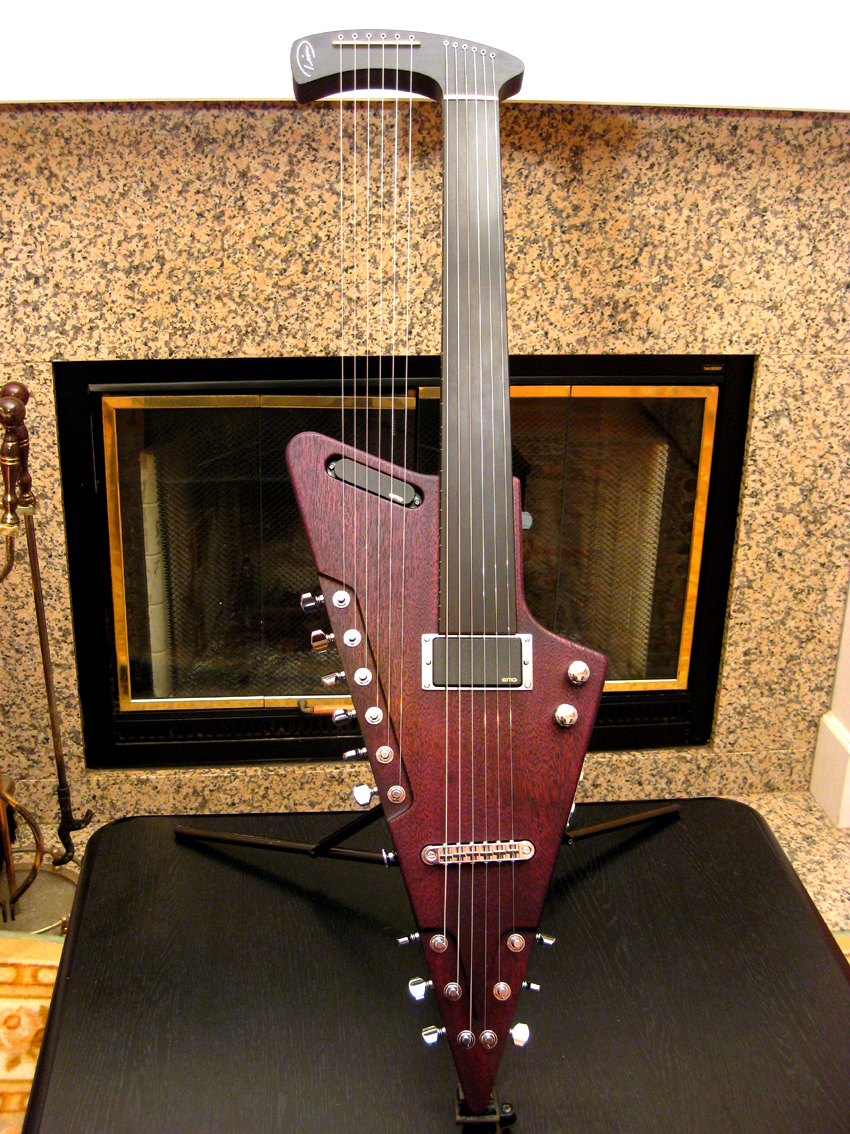 Beautiful instrument. I watched two vids with Tim Donahue; Last Friday Night & Tell me a story. Such a expressive instrument. It seemed so effortless to play without pluckin or picking but is it really?

These days Tim mostly plays the fretted version (fantastic sound IMHO with the fretted + harp), but I only have the fretless which sound-wise is more like two instruments rather than one instrument. There is the challenge in multi tasking playing different parts with each hand, but you learn that in a year (if you don't already have those "brain skills" from playing drums, harp, piano etc). I think this harp guitar is much more difficult than the Stick because it's not just to tap on the notes you want; on the harp guitar the right hand has to pluck the harp strings while the left hand taps and does hammer-on and pull-off stuff on the fingerboard.

In fact I think it may be harder for guitar only musicians to develop the needed brain function for multi tasking because when you practise normal guitar a lot you actually practise the opposite; to synchronize both hands (rather them freeing them up)

Yes I could hear the fretted being more like one instrument, but I enjoyed the fretless even more.

"In fact I think it may be harder for guitar only musicians to develop the needed brain function for multi tasking because when you practise normal guitar a lot you actually practise the opposite; to synchronize both hands (rather them freeing them up)"

I was lucky to buy my harp guitar at the old prices, before the tsunami disaster in Japan which forced them to raise prices a lot.

Per Boysen said:
I was lucky to buy my harp guitar at the old prices, before the tsunami disaster in Japan which forced them to raise prices a lot.
Click to expand...