I'm the proud owner of a Carvin/Kiesel DC727 that I received about two years ago and I've been very pleased with it. I ordered it just before the Lithium humbuckers were available, but I was able to get a late prototype version of them, which I'm also pleased with and which are still in this guitar even though I have a Crunchlab/Liquifire set laying around.

I ordered the guitar with individual coil-split toggle switches, and my only minor issue has been that the split single coil sounds can be a bit harsh in the upper mids and treble frequencies because the 500k volume pot is still in place when the coils are split (whereas most single-coil setups use a 250k volume pot, which rolls off some of that high end). To address this, I performed the following modification.

The spare pole on each DPDT coil-split toggle is used to switch in a fixed 470k resistor to ground at the output of each pickup, so that when a split pickup is selected the 500k volume pot has a ~500k resistor in parallel with it, which is roughly equivalent to a 250k pot. When a pickup is not split, the 470k resistor is not connected, so in humbucking mode the 500k pot is retained. Below is a diagram illustrating this. 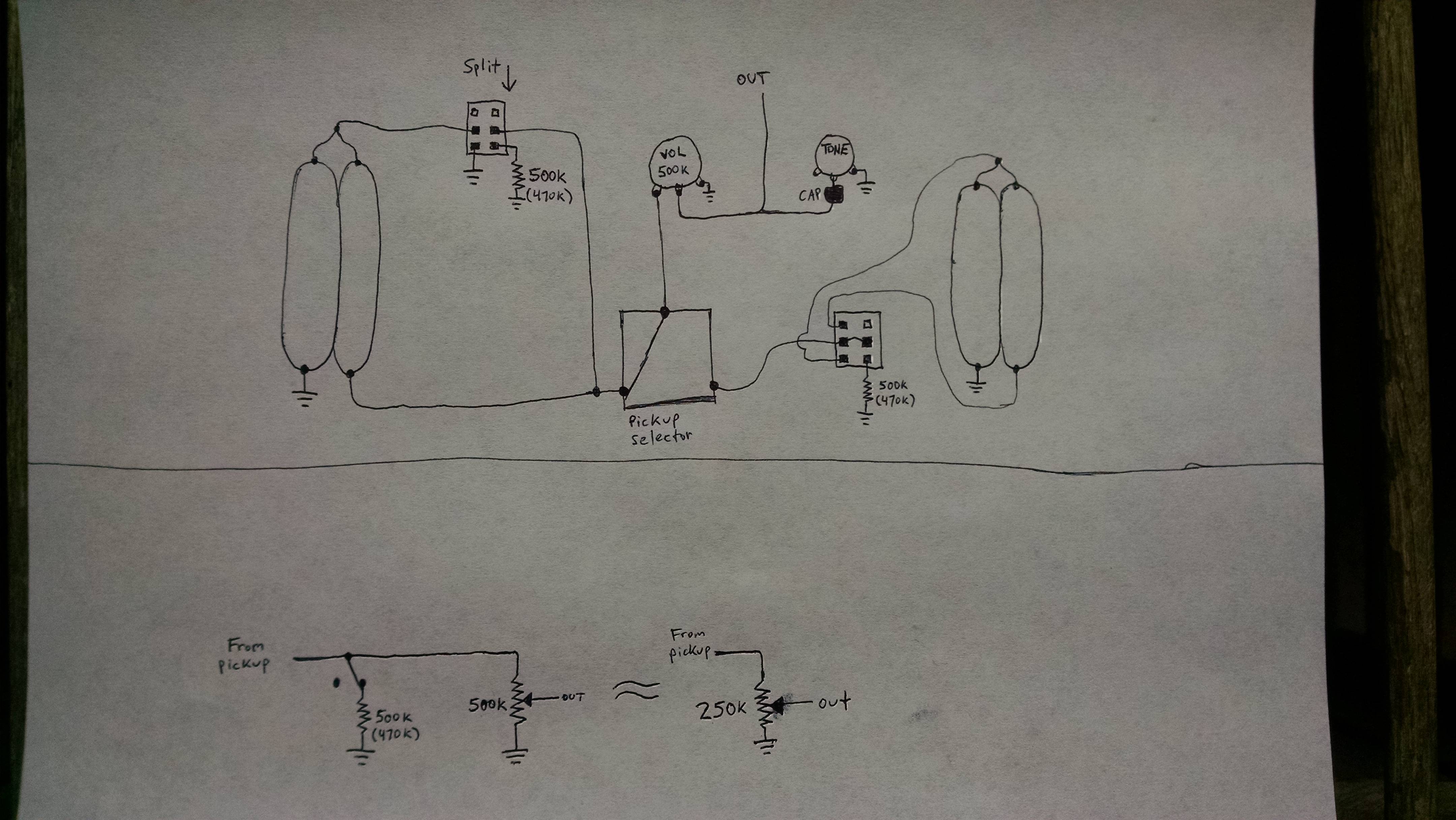 This has really smoothed out some of the "bright honk" and "bite" of the split-coil sounds, making them a bit more Strat/Tele-like, and I can now switch seamlessly from humbucker to single coil mode without adjusting the guitar's tone control or the Axe-Fx BMT or presence.

Are there any production guitars with coil-splitting that implement something like this?

I think Fender is doing something similar to achieve to same result. It may be a dual pot for HSS guitars. It's been a while since I've read up on it though. Anyway, thanks for the diagram! very cool

Yes, this is a good mod. The main effect of lower pot values is to reduce the height of the upper resonance peak, which admittedly, sounds similar to "rolling off the top end".

Of course, with both switches set to single coil, you'll have a pot value of approx 160K, but that's fine with both pickups connected.

I recommend connecting the tone cap to the connection between selector switch and volume pot instead of the pot wiper.

GM Arts said:
I recommend connecting the tone cap to the connection between selector switch and volume pot instead of the pot wiper.
Click to expand...

Good catch. That's an error in my diagram; the circuit is wired with the cap on the third lug of the volume pot.

Thanks for sharing. I've read about this mod before and it interests me. I split humbuckers a lot and they're bright to begin with (PAFs) and I like 500K volume pots.

IIRC, PRS does something like this on some of their models.

I'm putting together an Ibanez 540S-QM that does something similar. It's got an HSH configuration, and I'm using an S-1 four-pole push/push switch to handle the resistor switching across all pickup positions with a single stroke.
6

There exist dual pots with 2x250k or 2x500k and also with push/pull switching. That's even better when you often play around with volume and tone.
Most people let them turned all the way up and never touch tone at all...the fixed value is just perfect for them anyway.
You must log in or register to reply here.
Share:
Facebook Twitter Reddit Pinterest Email Link
Top Bottom